Another advantage of joining the New Order: Instant celebrity and renown everywhere you go.

The moment Agent Salah ad-Din al-Jawahiri appeared in local, his arrival was trumpeted by watchful miner Beachura. Thanks to the New Order, formerly AFK miners have begun to pay attention to local. Almost like the miners of lowsec and nullsec--the ones who actually play the game. 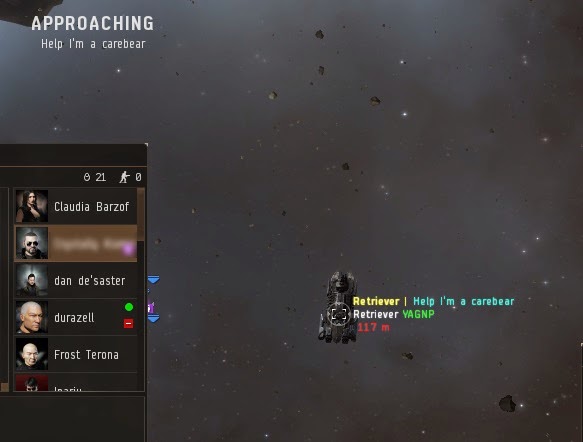 Our Agents work more quickly than Beachura could've imagined. Within seconds of the miner's warning message in local, Beachura's own Retriever was in jeopardy. Instead of allowing her ship to be destroyed, Beachura ejected from the mining barge. The "YAGNP" ticker of You Ain't Got No Pancake Mix, Beachura's corp, remains visible. 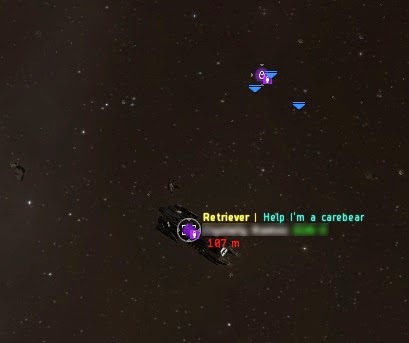 Agent Salah called off the gank, and the neutral scout--whose name is opsec--boarded the Retriever. I'm happy to report that the Retriever was safely escorted to a nearby station, where it was placed into New Order service.

It was a curious thing, Beachura's decision to allow the Retriever to be captured rather than ganked. She sacrificed an insurance payout and a kill right she'd otherwise have obtained. And our Agents were able to seize the mining barge intact, rather than half its modules. Was this a smart way for a rebel miner to oppose the New Order? Salah sent an EVEmail to Beachura to ask these questions. But Beachura had already blocked Salah. No matter--Agent loyalanon sent a mail of his own.

Beachura explained that she had done it to avoid getting an unsightly loss on her killboard. It was a startling admission: She cared more about killboards than the in-game consequences of her actions. But at least she admitted she wasn't a newbie.

loyalanon invited Beachura and Salah to a convo. Beachura confirmed that her corp's killboard would suffer if it were to be made known that she had lost a mining barge to CODEdot gankers. It didn't matter that she had lost the ship in-game; only the killboard mattered.

loyalanon was also able to get an explanation for why Salah was blocked. Beachura was merely enforcing the EULA as she saw fit. 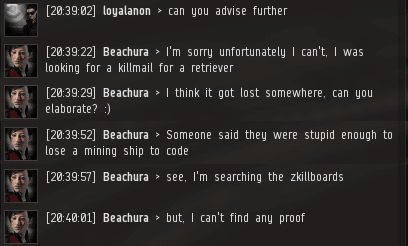 Midway through the convo, Beachura realized that her admissions could be used to incriminate her. From that point forward, she denied losing a Retriever. 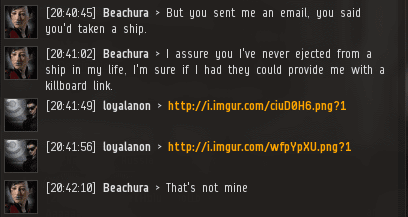 But we know better. A clean killboard doesn't make a clean carebear. Nor are one's crimes against the Code washed away so easily. Beachura's got baggage. Nearly two years ago, she appeared in MinerBumping: 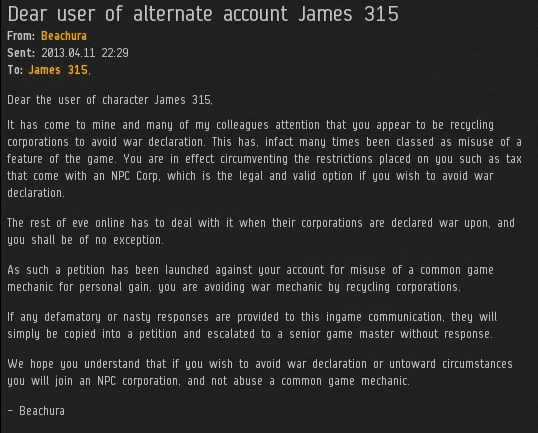 Even back then, she was creating her own version of the EULA in her mind. 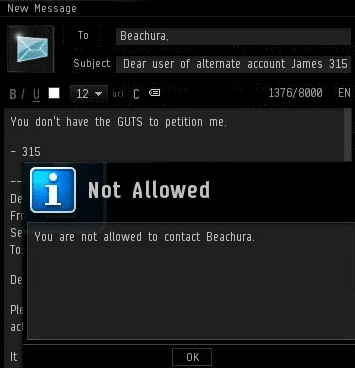 ...and she was overusing the "block" function. It might not have been on her killboard, but it was on her permanent record in the New Order archives. Such things can only be cleaned up after a payment of 10 million isk and a genuine effort to obey the Code.
Posted by MinerBumping at 19:07