The Trial of Krimletch, Part 2

Previously, on MinerBumping... Highsec carebear Krimletch was discovered mining Veldspar without a permit. His Covetor was promptly destroyed. Our Agents sent him informational material about how to obey the Code in the future. The miner expressed his refusal in a series of increasingly hostile EVEmails, so he was invited to an informal private chat.

In the world of the carebear, everything is upside-down: The miner is the hero, the ganker is the villian, and the mining bot is the ideal. Our Agents sought to liberate Krimletch from that terrible world and show him a better one. 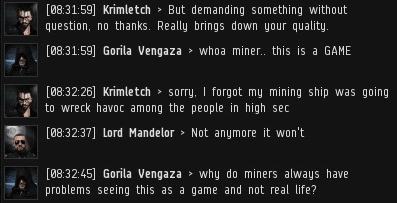 Agent Lord Mandelor began to quietly invite additional Agents into the convo. Studies show that a convo with a higher Agent-to-carebear ratio have a greater chance of success. Krimletch needed all the help he could get. 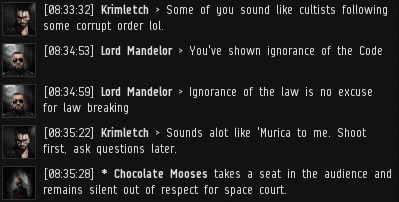 As more Agents silently filed into the convo, the casual chat was escalated into a full-blown trial. To avoid putting undue stress on the miner, Krimletch was not made aware of the change. 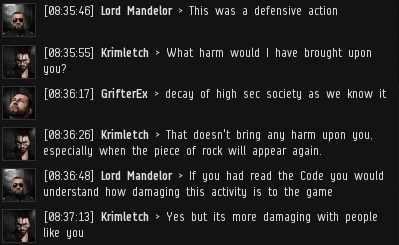 Now the miner was on trial for his life in the game. Rather than go to the trouble of spelling out formal rules and roles, the trial consisted of various Agents questioning the carebear. 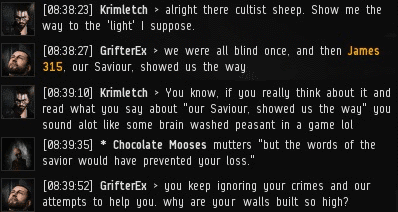 The former Covetor pilot remained surprisingly stubborn. He refused to admit that he was in the wrong. He defiantly blamed everyone else for the failure of his highsec mining career. 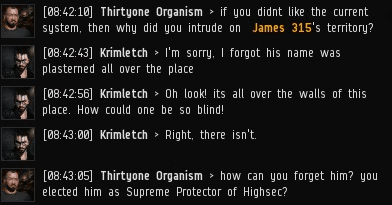 Critics sometimes accuse me of being self-aggrandizing or attention-seeking. But when a miner gets blown up for violating the Code, the complaint is that the New Order isn't visible enough. According to Krimletch, he needed to see much more publicity about my ownership of highsec. If I am space-famous, it is only to help the carebears--and at their own request. 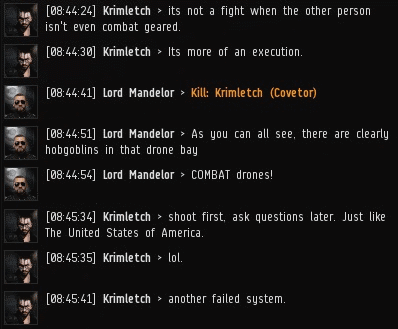 Krimletch was on the ropes. He was unable to cope with the bombardment of piercing questions. To deflect attention from his own crimes, Krimletch put the whole system on trial. Also, the U.S. government.

But Krimletch's questioners remained laser-focused. Strip miners and ice harvesters ain't got nothin' on our Agents. It was only a matter of time before Krimletch slipped up. When it happened, everyone pounced on him.

It was the "I'm a new player" excuse. When Krimletch reached for it, his hand was caught in the cookie jar. In a panic, he made another crucial mistake.

If this had taken place on TeamSpeak, there would have been audible gasps. Without realizing it, Krimletch made a devastating admission. Now there was serious doubt about whether the miner would be reimbursed for his Covetor.