It has been said that the more love you give, the more you have. The same is true of the Code. The good that it generates leads to more Code and more good.

...And what's the effect of New Order shares being sold? A lot of this: 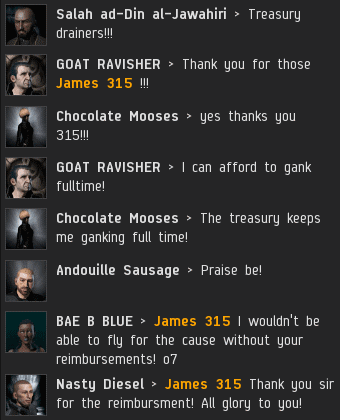 More enforcement of the Code throughout all highsec. CODEdot alone managed to destroy over 1.1 trillion isk of bot-aspirancy during the month of January. We can all agree that New Order stock produces a healthy return on investment.

Feyd Rautha Harkonnen does player profiles of notable characters in EVE. If you haven't already, check out his interview of New Order Fleet Commander and zKillboard's #1 ranked PvP'er in EVE, Agent loyalanon. Who wouldn't want to learn more about this fascinating highsec celebrity?
Posted by MinerBumping at 19:14