By now you should all know the drill. It's another edition of the Highsec Miner Grab Bag! 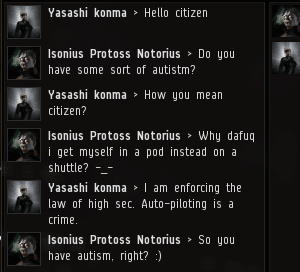 Miners are creatures of habit. Isonius Protoss Notorius' "thing" was to throw around references to autism. He went all-in on it. 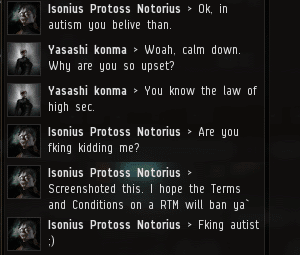 It's too bad we can't read all the petitions that get filed against our Agents. I'm sure Isonius' petition portrayed himself as an innocent little angel.

Russian miner Ezra Klaim grew alarmed when his ship loss was followed by a request for 10 million isk. Luckily, our Agent was equipped with a Russian translation of the Code:

Oddly, reading the Code sometimes makes miners even more confused. I don't see why that should be the case--the Code is like an instruction manual for EVE.

Former Federal Investigator and current carebear Irishtom Murphy threatened our Agent with a hefty prison sentence. You'd think a lawman would know to mine by the book.

Irishtom clarified that regulating highsec's mining industry is a real-life crime. I don't know why Irishtom left his post as a federal investigator; seems like he must've been really good at it.

Once you've committed a crime, it's too late to hire an attorney? Somebody tell that to all the space lawyers out there.

McChantavich en Chalune was shocked to discover how much has changed in highsec over the last three years. Of course, the Code was around back then, but our ability to enforce the Code has greatly increased each year.

If you think things have changed a lot already, just imagine what another few years of the Code will bring to highsec. People won't even remember what pre-Code highsec was like.

Every time a miner changes his behavior in response to our Agents, it's another victory for the New Order--whether the miner realizes it or not. 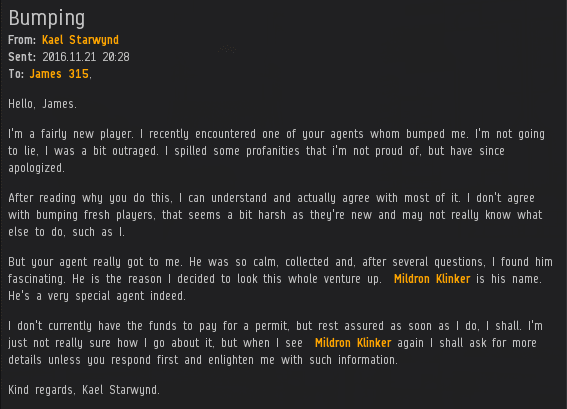 The superior qualities of our Agents do not go unnoticed. Even the rebels and Anti-Gankers secretly respect them.

EVE University turns out some brilliant graduates. Once you've learned everything they have to teach, you're ready to join CODE.

Agent You Blew Up heard a sad tale from a destitute French miner.

That's right, a bonus section in a Highsec Miner Grab Bag! Even after one hundred twenty editions, the Grab Bag is still capable of surprises.

Agent Eldayve translated the Code into French, making the law of highsec even more accessible to the people of highsec. You can find a link to the French translation on the Code page.