Why They Hate the Code, Part 6

Previously, on MinerBumping... Never flinching, our readers continued their study of those who hate the Code.

"You can run where I'm highest when I pick up strawberry."

The Code is about order and balance. It puts everything into its proper place in highsec--that's one of the reasons our organization is called the New Order. Disgruntled carebears rebel against their place in this order, apparently believing that their mindless, low-risk, AFK PvE activities should earn them a position of great honour. That's bad enough, but what happens when someone comes along who doesn't fit into the order at all?

There are some who are too unusual, too far outside the norm, to easily find their place in highsec. Their presence tends to disrupt the proper functioning of the system. Our Agents are forced to adapt, to make extraordinary improvisations with no advance warning. It's not easy, and frankly, our Agents don't get nearly enough credit for the work they do in this regard. 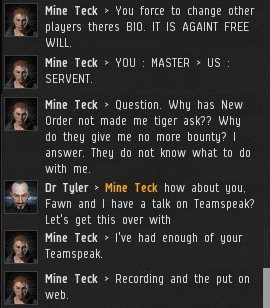 In creating a balanced society for highsec, those who exist on the extremes pose a unique challenge. As always, our Agents rise to the occasion. They do everything they can to help accommodate the anomalies they encounter. Nevertheless, the Exotic Specimen does not accept their help. He rebels. 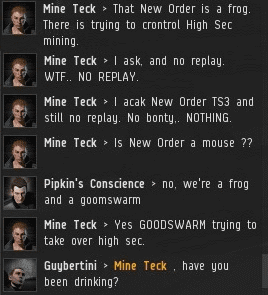 Instinctively rejecting all efforts to be "put into a box", the Exotic Specimen roams highsec unrestrained by convention, like a bull in a china shop. Content creators watch him closely, as the rare quality of his tears makes them highly prized. The Exotic Specimen tends to disappear after a time; highsec is not a place where he can make a permanent home for himself. He would need the Code for that, and the Code is simply too alien for him to grasp.

"Don't worry about that wardec. They'll get bored of killing us eventually."

Of all the villains of highsec, the Taskmaster does the most damage to the new player experience. He creates a highsec PvE corporation and sucks all the fun out of EVE for anyone unlucky enough to join it. His instruments of torture are the mandatory mining op, the ore buyback program, and the "dock up until they go away" war plan. He raises his corp's tax rate to astronomical levels, saying it is a temporary measure--in the same sense that our solar system is temporary.

In short, he makes everyone around him miserable. Experienced players usually know to avoid the Taskmaster, leaving the newest and most vulnerable players as his victims. His goal is to take their isk, but he also takes their innocence, and something of their souls. The Taskmaster's victims often stay in his corp far longer than you'd expect. There are two reasons for this: Loyalty, and the fact that a new player doesn't know how much better EVE can be.

The Taskmaster claims to teach his corp members how to play the game, though he knows little of it himself. He often exaggerates and boasts about his qualifications, persuading newbies that he's the best CEO they'll ever have the privilege of serving. What the Taskmaster actually teaches them is how to hate EVE Online. If you want to know why the game doesn't have better player retention, ask the Taskmaster to describe a typical day in his corp. 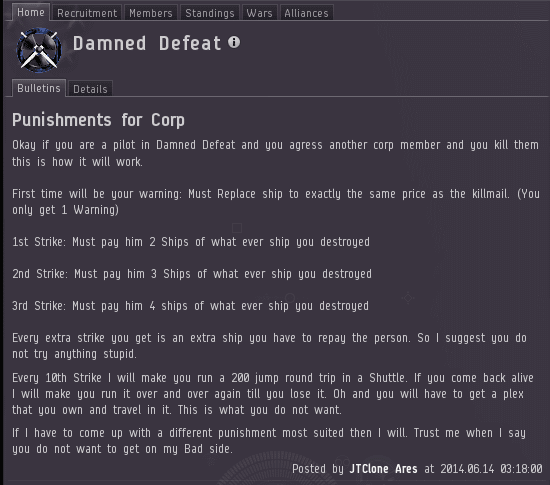 Perversely, the Taskmaster urges CCP to help him "protect" new players. He wants his corp to be exempt from wardecs, and to make suicide ganking and awoxing impossible. It's not for the sake of his corp members' welfare, though: He knows that when his corp is destroyed, the liberated newbies will go elsewhere, depriving him of his source of isk. Then he'll have to start up another corp and find new victims. Only the New Order stands in his way, and that's why he hates us so.

"For the glory of the Proveldtariat!"

Over the past four years, we've seen countless rebel movements and would-be rebel leaders. Their righteous anger burns bright and then fades away. They are all spectacular failures. It's to be expected that they would all fail, for the CODE always wins, always! But the spectacular nature of the Passionate Young Rebel's failure makes it worthy of study. 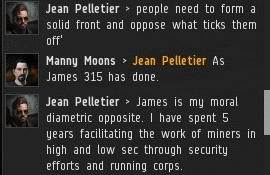 Consider the paradox: The Passionate Young Rebel's fury is at its hottest in the beginning, and later he cools off into a quiet resentment. It seems strange that he would hate us more before he is humiliated in battle, before we shatter his dreams. You'd think it would be just the opposite.

If the Passionate Young Rebel's anger were fueled entirely by witnessing the New Order enforce the Code, he should get angrier every year. He should be outraged by each new gank, bump, awox, wardec, etc. His outrage should turn to panic as he watches our organization grow, crushing all who resist us. The Passionate Young Rebel's emotional trajectory defies these expectations. Therefore, he must not be primarily motivated by opposition to the Code, as he claims to be. 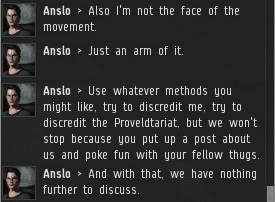 No, the Passionate Young Rebel wants to be the hero of his own story. Unfortunately, his view of the world is completely twisted; he sees everything in reverse. He hates the New Order opportunistically--he sees in us a convenient villain he can fight against. He sees in the carebear a damsel he can rescue. Sadly, the damsel cannot answer him, for she is AFK.

In the end, the Passionate Young Rebel becomes disillusioned. He knows that his endless series of failures mean he cannot be a hero. Therefore, there's little reason to go on hating the villain. His passion is gone, replaced by bitterness. Unlike the passion, his bitterness never quite goes away.

To be continued...
Posted by MinerBumping at 19:52