Return of the Mad King, Part 1

Ah, the Market Discussions subforum on EVE-O. Normally home to scams and failed businesses, it is also the place where the most successful legitimate enterprise in EVE history was announced.

I speak, of course, of the New Order's shares program. More than a trillion isk worth of reimbursements has been paid out, dwarfing all other public programs we've ever seen. (By way of comparison, the famous Hulkageddon Infinity paid out around 50 billion isk.) With nearly a thousand replies and 150,000 views, the New Order thread is the subforum's crown jewel.

One fine day, a fellow named Rogue Halo started up an exciting thread in which he offered to give away his entire personal fortune of 65 billion isk. Would the post be taken seriously?

Naturally, there were doubters. With a few notable exceptions like the aforementioned New Order shares program, business ventures on EVE-O tend to be scams. However, Rogue Halo wasn't asking people to give him money. Things seemed promising.

Encouraged by the subforum's general enthusiasm, Rogue Halo dismissed the skeptics and began giving away some money. Or so he claimed.

Fifteen billion isk was distributed--no strings attached. Better still, fifty billion more was promised. Rogue Halo's thread was functioning as a model of aboveboard generosity. It was a Market Discussions sensation, a cause for great celebration and optimism.

But in EVE, such a thing is not meant to last.

The 65 billion isk giveaway came to a sudden and unexpected end--coinciding with the arrival of an ominous figure.

You know his name, even if you can't quite place it yet. Fin Udan. Who is this man? 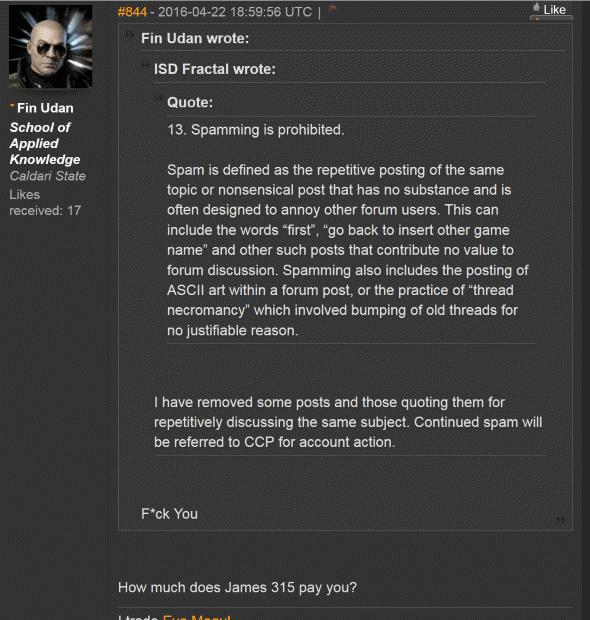 Yes, Fin Udan, the notorious Market Discussions poster who was the subject of the Forum Freakout series back in May. He gained his notoriety by repeatedly and aggressively demanding that the New Order shares thread be closed. He directed profanity at the ISD members who got in his way, and he even accused them of being on the New Order payroll.

But Fin was no ordinary forum troll. Despite his continual violations of the EVE-O rules, some of which warranted an immediate permaban, Fin was mysteriously untouched by the forum moderators.

At one point, Fin Udan was driven mad by his own sense of invincibility. He threatened to use his unholy powers to destroy the forum. 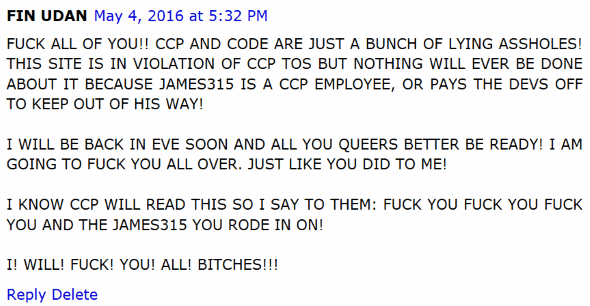 Whatever had been the source of Fin's luck or power, it eventually ran out. Fin Udan was banned from the forum and biomassed. In a final bout of anger, he promised revenge. And then, quiet. For seven months, nothing more was heard from him--until now. Had Fin Udan truly returned, or was it a pretender using his name? 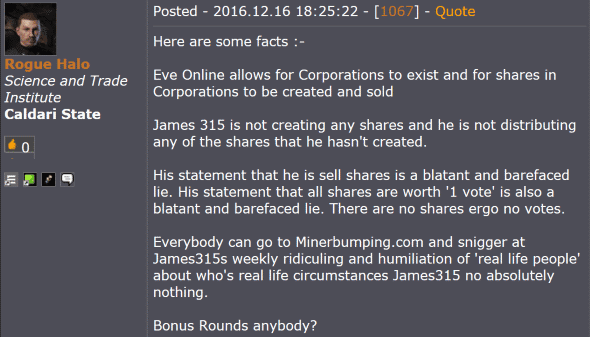 A few days before offering his 65 billion isk giveaway, Rogue Halo posted some replies in the New Order shares thread. The style and substance of his complaints were eerily similar to those of Fin Udan. Rogue Halo and both the old and new Fins were indeed all the same person. And he was about to make good on his promise to get revenge.