Bubba Fieth met an unexpected fate when autopiloting through highsec. He shouldn't have been so surprised; the Code told him this would happen. 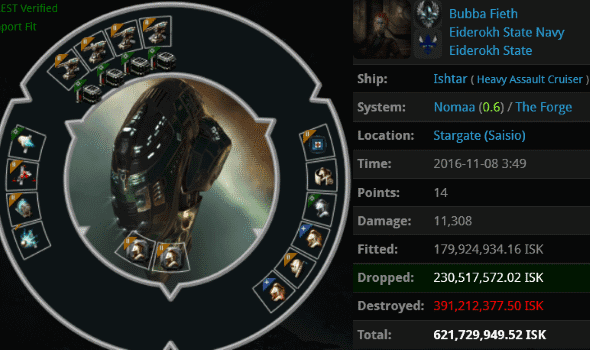 Bubba was flying a typical ship that can't shoot back: a heavily armed Ishtar. But his armor and weaponry were no match for the New Order. A pair of Tornadoes piloted by Agents Ralliana and Luna Nightblood blapped the Ishtar and collected the loot. For some reason, the Ishtar was hauling a bunch of stuff.

Random onlookers gathered to witness the scene. Everyone enjoys it when CODE. creates content.

But now it was Agent Ralliana's turn to meet an unexpected fate.

In the course of four years, CODE. has destroyed more than 181,000 ships. Some of those ships belonged to repeat customers, but it's fair to say that CODE. has ganked a lot of people. Now, finally, our Agents messed with the wrong guy.

Bubba issued a chilling threat: If his terms weren't met, he would turn the Nomaa system into a bloodbath.

His price was the immediate surrender of all the loot dropped from the Ishtar kill.

Like a trained hostage negotiator, Ralliana urged Bubba to slow down. She would need time to meet his demands.

But the angry Code violator knew stalling tactics when he saw them. He wasn't having any of it.

Ralliana offered a compromise that she felt both parties could live with. She agreed to sell Bubba a mining permit for 10 million isk.

When the return of his loot seemed doubtful, Bubba finally showed some flexibility. He was willing to give Ralliana 24 hours to return his stuff.

Bubba's generous 24-hour grace period came with a warning, though. If his demands were not met, Ralliana would be completely destroyed. She would no longer be able to play EVE.

Despite the support of powerful friends in nullsec, things didn't go quite as Bubba hoped. Instead of being annihilated from the face of EVE, Ralliana continued enforcing the Code to her heart's content--actually inflicting more damage to Code violators that month than she ever had before. Ralliana never returned Bubba's stuff, but she did make a promise: She would personally see to it that the loot was put to good use. So, in a way, Bubba's hauling trip was a success after all. Our Agents love helping people.
Posted by MinerBumping at 16:54