If ganking miners were as easy as the rebels and skeptics say it is, then everyone would do it. No, ganking miners is elite PvP. And you can imagine how a ganker feels when he's told, after performing an outrageously well-executed gank, that the miner must be reimbursed. 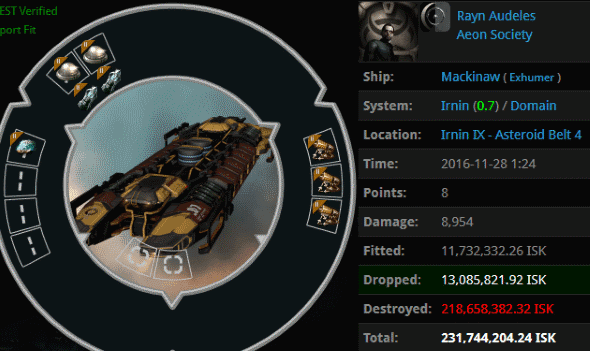 Rayn Audeles contacted Agent Lawrence Lawton and demanded to be repaid in full for the gank of his yield-fit Mackinaw. Lawrence and the Poddington family were still celebrating the gank an hour later when Rayn returned to his keyboard and sent a chilling EVEmail:

I had a permit, and was never told what to put where they told me they kept a list, I've paid well over 200 million for those.. you made a kill of someone holding a valid permit, and your code indicates that I am to be reimbursed for that.

Rayn's claim was based on alleged permits sold by Dreddit, the primary corporation of the TEST alliance. A quick check of Rayn's killboard reveals that he'd previously suffered the loss of a 5 billion isk pod, ganked by members of TEST. It appeared in a Kills of the Week post.

There was evidence that Rayn had indeed been ganked by Agents in the past. The matter was serious enough to warrant a private convo.

Lawrence was sincere in his effort to gather evidence about Rayn's so-called Dreddit permits. Rayn was holding himself out as a Code-compliant miner, but Lawrence couldn't help noticing he was being a bit pushy.

Despite Agent Lawrence's cooperation and generously undivided attention, Rayn had a hostile attitude. He muttered threats--which, to put it mildly, is not the typical behavior of a Gallant miner.


Lawrence Lawton > Could you please tell me why your client closed as soon as your mackinaw popped?
Rayn Audeles > because i didn't manage to warp in time, and i was trying to get the other one out of the area, handling two clients is hard
Rayn Audeles > bear in mind, setting up representations of a contract and not honoring those even in an environment like this is fraud
Rayn Audeles > i can get those pages taken down by the provider legally

As Lawrence continued to collect information about Rayn's case, the miner began to show his true colors.

The miner wasn't interested in helping Lawrence fill out his reimbursement claim. He was a space lawyer.

No wonder the miner had been behaving so strangely. He'd been spending all his energy putting on a front, trying to suppress the symptoms of his bot-aspirancy. It left him with no energy to spend on being polite.

Now that things had escalated, Agent Lawrence started screenshotting the conversation. He wanted to make sure everything was done by the book. When dealing with a space lawyer, the case has to be airtight.

Rayn's story was changing. It was a confusing, muddled mess.

Lawrence asked a perfectly reasonable question about the lack of tank on the supposedly Code-compliant miner's Mackinaw. Rayn got defensive, angrily deflecting the question.