Why They Hate the Code, Part 4

Previously, on MinerBumping... We became even more enlightened about those who hate the Code.

"They don't care about any Code. They're doing this to control the economy."

The New Order is the most transparent organization in EVE history. To put it mildly, there's an abundance of material explaining our goals and documenting how we achieve them. In spite of this transparency--or perhaps because of it--our enemies have long searched for ulterior motives, to find the "real" reasons why we do what we do. The Conspiracy Theorist believes he has found the truth, and with it a reason to oppose the Code.

To understand the Conspiracy Theorist, we must first realize how little knowledge the highsec carebear has about the world outside of highsec. In my experience, the average carebear has at any given time the capacity to be aware of only three alliances outside of his own carebear universe. Two of those three alliances will always be CODE. and Goonswarm Federation. The third alliance will depend on the current state of nullsec. In the early days of the New Order, TEST took the third position; today, PL is more likely to get that spot. 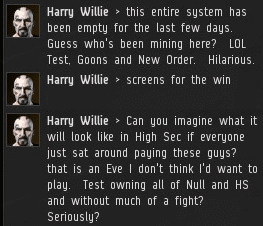 Because the Conspiracy Theorist has so little information at his disposal, the picture he creates is necessarily limited--like someone trying to solve a 1,000 piece jigsaw puzzle while having possession of only three or four pieces. Thus, all Conspiracy Theorists' theories are similar: Basically, that CODE. is secretly helping nullsec alliances to take control of highsec by influencing the economy.

It's natural that a carebear would come up with a theory like this. The carebear is fixated on isk, so he assumes everyone else thinks in those same terms. "Why would someone gank a miner unless he was somehow making a massive profit?" he asks. His mind cannot grasp the benevolence of the Code. 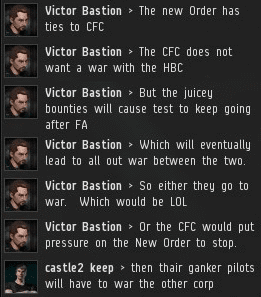 Another reason the Conspiracy Theorist looks to nullsec for answers is that he yearns to be included in the great story of EVE. At heart, even the most solitary carebear wishes he could be part of something greater. Of course, in a way he is: The New Order converts the carebear into content. The carebears are part of a great story; it's the greatest one in EVE and has nothing to do with nullsec--the story of the Code.

Still, the Conspiracy Theorist cannot stand the idea that nullsec powers are trying to control and manipulate him to their ends. He must resist the conspiracy, and therefore he must resist the Code.

We all know that highsec miners are at the bottom of EVE's food chain. Even the miners know it. If a miner has a big ego, he becomes torn between his desire to mine and his desire not to be something puny and weak. As we saw with the Self-Denying Miner, some miners resolve this conflict by identifying as something other than a miner. Specifically, the Self-Denying Miner identifies with his (real or imagined) PvP main. The Internet Tough Guy does something very similar: He declares himself to be a brawler in real life. His out-of-game persona is his PvP main.

And so, even as his mining barge gets batted around by bumpers like a ball of yarn, he spits out his threats. The Internet Tough Guy's Retriever may lack weapons, but he consoles himself by thinking about his real-life fists and any weapons he may own. He may also remind himself of his inherent Russian greatness.

Because of his ego, the Internet Tough Guy can't back down in local chat or EVEmails, no matter how powerless he may be in-game. He knows that a fail-fit Mackinaw, if piloted by someone who could beat you up in real life, is truly a force to be reckoned with. Surrendering 10 million isk is beneath him.

"When you pay for my EVE subscription, then you can tell me what to do."

One of the great mysteries of highsec is why a miner will spend hundreds of millions of isk on replacement ships, but won't spend 10 million isk for a permit to avoid being ganked on the first place. Even more curious is a miner's willingness to spend billions of isk on bling and implants to improve his efficiency, only to die for lack of the same 10 million isk permit. For the Control Freak, the answer is simple: The whole point of EVE is that no one can tell him what to do.

While the Common Bot-Aspirant avoids contact with other players because he sees it as an unnecessary distraction, the Control Freak doesn't mind other players unless they attempt to exert influence over him. For the Control Freak, EVE is an escape from a life of following someone else's orders; it's not uncommon for a Control Freak to compare our Agents to their overbearing boss. Needless to say, when they first encounter the Code, it is an unwelcome surprise.

Non-miners are puzzled when they hear highsec carebears complain that nullsec mining is safer than highsec mining in addition to being more lucrative. If this were true, then one would expect all those highsec miners to immediately move to nullsec. But the Control Freak avoids nullsec like the plague because he doesn't want to be constrained by the rules of a nullsec corp or alliance.

In highsec, the Control Freak believes he has found a place where he can do things exactly how he wants, with absolutely no oversight or criticism or possibility of failure. He finds it "relaxing". And while this is less unhealthy than getting the same feeling from anorexia or cutting himself, it is impractical: The miner is no more free from rules in highsec than he is in Goon-controlled nullsec, because the space is spoken for. Highsec is ruled by the New Order. Those who crave total independence can go find a wormhole or something.