It's a special time in highsec. Each year at this time, EVE players put down their weapons, put aside their quarrels, and join together in harmony. Even the highsec carebears manage to stop making death threats as they link arms with New Order Agents and sing carols in a dramatic, heartwarming gesture of--

Oh, it's business as usual then. We shall maintain all our protocols and review extraordinary kills from the week of December 18th @ 00:00 EVEtime through December 24th @ 23:59 EVEtime.

The EVE subreddit has been breathlessly reporting huge victories for the Anti-Gankers almost on a daily basis now. The Kusions have been stopped! Uedama is completely secure! Code-hating Redditors furiously upvote the posts. But is there any truth to these reports?

It would take more than a Christmas miracle for the Anti-Gankers to stop failing. 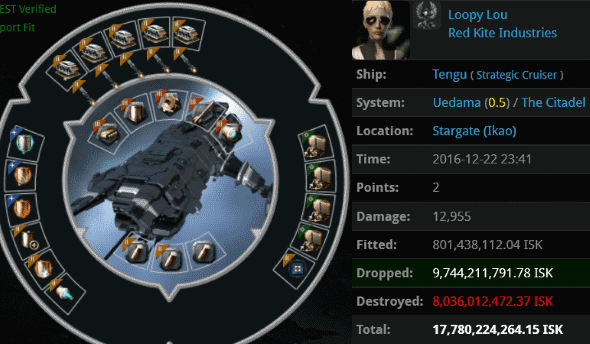 KILLMAIL
Loopy Lou managed to lose 17.7 billion isk while hauling a vast library of blueprints through Uedama. Her Tengu was AFK and, though it had some weapons, it was not armed with a New Order permit. The Tengu's defenses were therefore easily penetrated by Agents Jayson Kusion, Justin Kusion, Joel Kusion, Jake Kusion, Jackson Kusion, Jason Kusion, Jayden Kusion, Joshua Kusion, Jeremiah Kusion, Joseph Kusion, and Johnathan Kusion. Where was Anti-Ganking? Busy writing more fake news, I suppose. 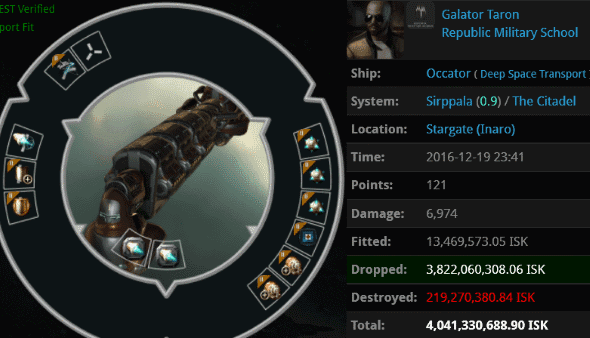 KILLMAIL
Galator Taron thought he had it all figured out: A 0.9 security system, a cloaking device, some shield mods, some agility boosters, a damage control, a couple of warp core stabs. But--oh dear--the Code! He forgot all about the Code. His oversight wasn't missed by Agent Votre Dieu, who expertly sniped the ship with his Tornado. 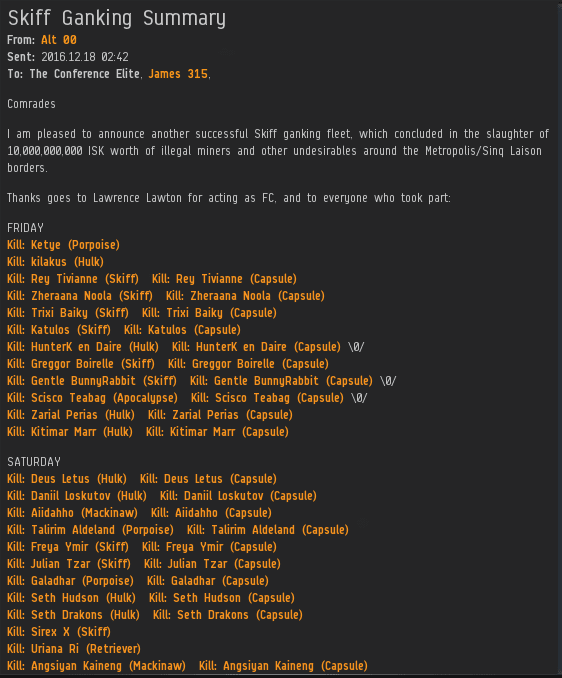 Last weekend saw a fresh batch of comeuppance for highsec's arrogant Skiff pilots, who fell one-by-one before an impressive fleet of New Order gankers. Among the 10 billion isk death toll: 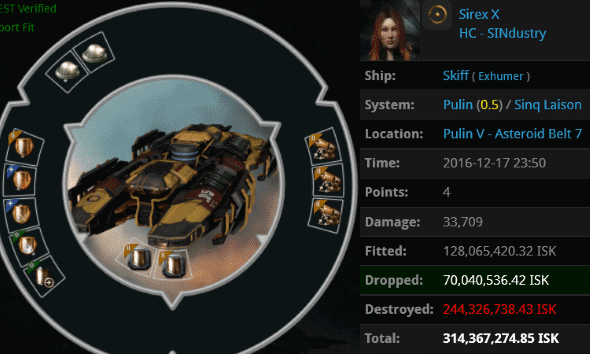 KILLMAIL
What is it with shield tanks being paired with yield mods in the lows? Talk about mixed messages! Sirex X was called to account for her crimes when the gank fleet arrived. She was either AFK or had nothing to say in her defense. She was therefore terminated by Agents Alt 00, Hulk Poddington, Alt Proxy, Skiff Poddington, Mack Poddington, Crom Cimmeria, Subotai Hyrkanian, Sir Demonic, Stieg Blomkvist, James Poddington, and Lawrence Lawton. 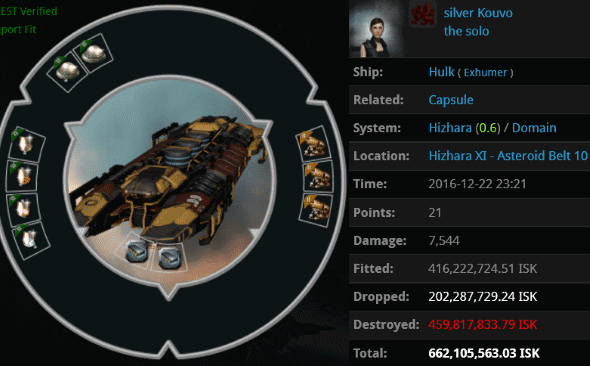 KILLMAIL
Yes, there are still people who pilot Hulks in highsec. silver Kouvo was tempting fate when she undocked in a Hulk with two ORE Strip Miners. Obviously Agents Carebears' Nightmare and Brutal Anna performed some elite PvP in taking her down, but even more impressive was the fact that this gank occurred simultaneously with the gank of silver's alt in a 656 million isk Hulk. silver's 577 million isk pod was also destroyed. In highsec, so much can happen in only a few seconds! 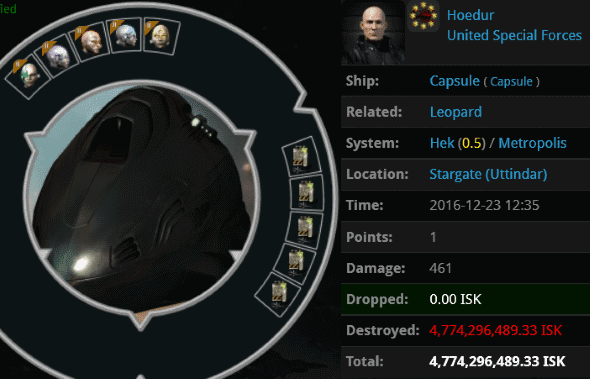 KILLMAIL
The Code has dramatically changed the way people spend their time in highsec. Under pressure from our Thrashers, more than 95% of autopiloting shuttles have switched to other modes of transportation. Hoedur was one of the hold-outs. His autopiloting Leopard was caught by Agent Tisiphone Dira. 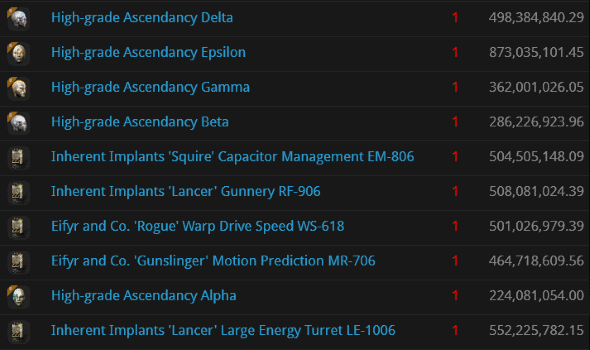 4.7 billion isk worth of implants was instantly erased. During any week that X-FEANOR doesn't undock, that would easily be the Podkill of the Week. I mean, you have to make a really big mistake to lose a pod more expensive than this. 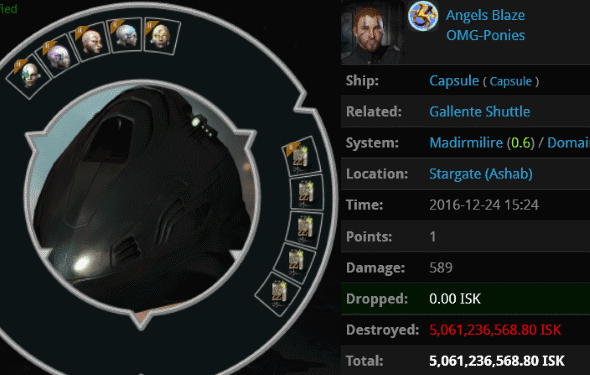 KILLMAIL
On Christmas Eve, Angels Blaze threw away his common sense and went AFK in a shuttle. Angels Blaze's pod was carrying 5 billion isk before Agent Aaaarrgg paid him a visit. 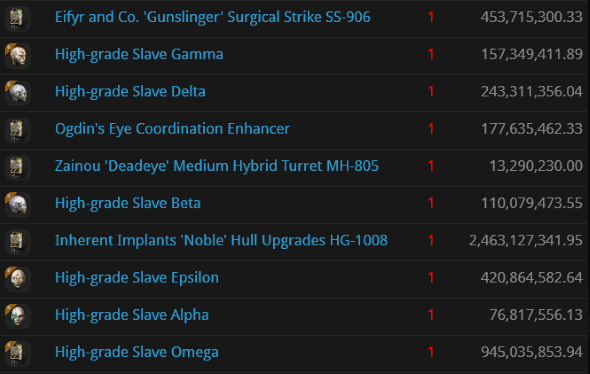 The carebear had been naughty, so Aaaarrgg had no choice but to leave him the killmail equivalent of a lump of coal. Even the worst of highsec are learning. It's a slow process, but their hearts and minds are gradually being molded by the Code. Now that's a Christmas miracle.
Posted by MinerBumping at 18:29