The Honour of TEST, Part 1

In a MinerBumping post from earlier this week, highsec miner Rayn Audeles claimed to have purchased a mining permit from TEST corp Dreddit. This sparked much curiosity among our readers--and no small amount of interest from members of TEST, who wanted to defend their alliance's honour. I personally received a full report from Agent KrazyTaco, who is also a member of the TEST Special Interest Group (SIG) called the "Soviet Union of Gank". 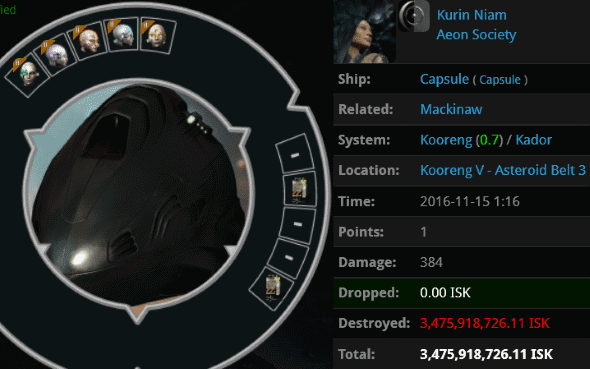 It all started with the destruction of Rayn's alt's Mackinaw and 3.4 billion isk pod, which included a Michi's Excavation Augmentor. Though not on the killmails in question, KrazyTaco was an eyewitness to TEST's encounter with Rayn in the exotic Kooreng system.

According to KrazyTaco, Rayn was offered the chance to buy a "TEST Dyno-Mite™ Mining Permit" as part of a special program to protect miners from TEST gankers who aren't part of the New Order.

It's rare to see an organization other than the New Order selling mining permits, but those who do usually charge much more than 10 million isk. Incredibly, the carebears still complain about our price being too high!


Rayn Audeles > let me double check everything
Rayn Audeles > our total assets are 232,660,448 but a lot of that isn't mine
Rayn Audeles > i have the screenshot but i've never sent one on here
KrazyTaco > That's ok, I trust you

Despite Rayn's alt having a decadent pod, Rayn's corp was very poor.


Rayn Audeles > and how am i supposed to recover the 3 billion we just lost????
KrazyTaco > If you eject from the mackinaw we can call it even
KrazyTaco > Otherwise we're going to have problems
Rayn Audeles > that's worth more than that amount anyway

Rayn owned a Mackinaw, just like his alt used to. KrazyTaco was willing to accept the Mackinaw in lieu of the TEST permit penalty payment.


Rayn Audeles > how do i know you won't just end up stealing the ship anyway
KrazyTaco > You have to trust us - I'm a member of TEST alliance, we're a major null sec entity
Rayn Audeles > and what proof do you have of who you even are? people scam all the time in this game...
KrazyTaco > click my name
Rayn Audeles > I see who you claim to be, but today is the first i've seen of anyone like you

In the early days of the New Order, highsec miners used to talk about two nullsec groups: Goons and TEST. Often, miners thought the two were one and the same. Much has changed since then; many of today's highsec dwellers aren't familiar with TEST. But TEST is slowly making a comeback.


KrazyTaco > How can I not be TEST if I'm in the TEST alliance according to the game
Rayn Audeles > i've never even heard of TEST is my point
Ion Fury > I've been in TEST alliance for over a year, KrazyTaco's word is our word
Impunitus Umbra > We are good people
Rayn Audeles > but yet your code seems to honor gankers too

Two other members of TEST vouched for Agent KrazyTaco. That, along with the fact that TEST owns some sovereignty in nullsec, was enough to convince Rayn to eject from his Mackinaw. 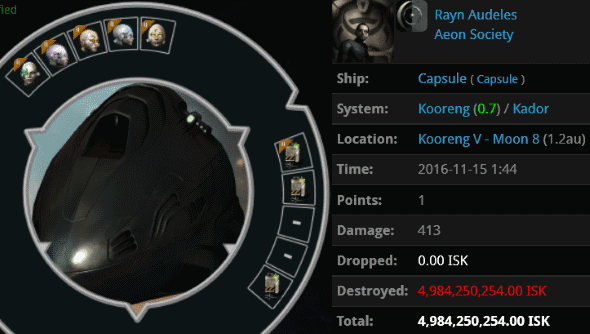 Rayn's pod floated next to his now-pilotless Mackinaw. His loitering earned him an expensive pod loss. The supposedly impoverished miner had owned 5 billion isk worth of implants--including another Michi's Excavation Augmentor.

The miner cursed the unfairness of the system. However, it's hard to separate his claims of unfairness from his frustration with losing an expensive pod. Thus, his complaints can be safely disregarded.


Ion Fury > I will start filling out an incident report.
Rayn Audeles > and what good will an incident report even do
Rayn Audeles > my own wallet is empty right now and im not the one that runs the ore for the corp either
Ion Fury > Well, if you asked your CEO or someone who can assist you? I am doing the best I can to offer this to you
Ion Fury > I will put the paperwork in and you will see the amount of 6,000,000,000 isk refunded to your account within 6-9 months.

TEST offers a generous reimbursement program, but like most nullsec programs, it's very slow. Fortunately, Impunitus Umbra offered expedited processing for the price of 100 million isk.


Rayn Audeles > our corp doesn't even have that money left anymore
Rayn Audeles > I'll be reclaiming my Mackinaw as well, since i was already told i could
Impunitus Umbra > Sure that is not a problem

Sadly, Rayn couldn't afford to pay for expedited processing--unless he cashed in his Mackinaw, which was still floating pilotless in space. The TEST members prepared to return the Mackinaw to its owner... 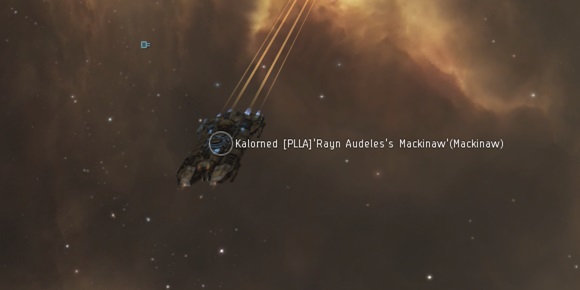 ...When suddenly, a mysterious interloper appeared out of nowhere and made off with it!