Why They Hate the Code, Part 5

Previously, on MinerBumping... Our readers were completely engrossed in their study of the New Order's enemies.

Losing ships is a natural, healthy part of the EVE experience. Every reasonable person knows this. Unfortunately, the Grudge Holder is not a reasonable person. He suffered a loss at the hands of the New Order, and he was never quite able to get over it.

Why does the Grudge Holder allow himself to be consumed by his desire for revenge? Maybe it was a particularly expensive loss. Or maybe he'd grown so accustomed to the safety of highsec that he didn't know how to lose gracefully. There's another possibility: He thought the New Order was beneath him. Having swallowed whole all the nonsense about CODE. being full of "scrubs", his world was shattered when he lost a ship to said scrubs. What's lower than a scrub? 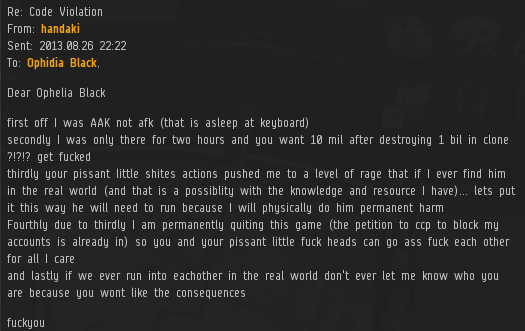 Sadly, the Grudge Holder's vendetta necessarily becomes a long-term one. Because the Grudge Holder is never able to get revenge on our Agents. Therefore, his anger has no expiration date. He must simply learn to let it go. Embracing the Code and quitting EVE are both preferable to losing oneself in a hopeless quest for revenge.

"Why buy a permit for ten million when I can get a Skiff for just two hundred million?"

The Code has an extraordinary influence over the lives of everyone in highsec. Our impact can be measured in many ways; the easiest way is to look up killboard stats. But killmails don't tell the whole story. When a miner docks up every time he sees an Agent enter local, that costs the miner something, too. And every miner who sacrifices yield for tank--whether in their lowslots or in their choice of hull--has lost isk to the Code.

The Shackled Miner is terribly afraid of being ganked, but he resolved long ago not to buy a permit. Instead, he trades in his Hulk or Mackinaw for a Skiff and tanks it up. He knows this is more expensive than buying a permit; he's willing to spend that money on his pride. However, he doesn't yet know just how much his pride is going to cost him.

You see, there's more than one way to gank a miner. Even if the Skiff pilot's ship isn't destroyed, our Agents ganked his yield. Over time, as the Shackled Miner watches his isk per hour ratio go down, his heart sinks, too. He becomes quietly resentful. When he sees other miners in the system using Retrievers and Macks, his resentment grows. Perhaps he tries alternating ships, switching from a high-yield fit to a high-tank fit when our Agents enter local. But it's not enough. And when his Skiff finally does get ganked despite its EHP--watch out for the cascade of tears.

Paradoxically, the Shackled Miner's anger toward the Code is all the greater for the fact that he traded in his yield for tank. Unlike a ship loss, the yield loss is constant. He thinks about it every second of every day he mines. Of course, tanking one's ship is one requirement of the Code. The Shackled Miner would do better to obey all the requirements.

"How do I send isk to someone?"

There are many phony newbies in highsec. Even carebears who have been in EVE for years masquerade as "new players". So many miners falsely claim to be new that sometimes one wonders if highsec is devoid of genuinely new players. But the Newbie is real. Carebear apologists and theme parkers use him as a pawn to justify many terrible ideas about how EVE should be. Our Agents, on the other hand, give him the simple respect of treating him like an EVE player. 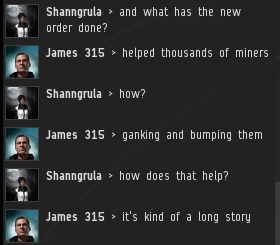 Rebels and skeptics gasp in horror when we say we are unopposed to shooting a new player's spaceship. They claim the Newbie is uniquely incapable of accepting the perils of PvP in EVE. Ironically, of all our enemies, we are hated by genuinely new miners the least. They have not yet been fed the poisoned milk of carebear myths. Even so, a Newbie who violates the Code remains our enemy.

Some well-meaning individuals, swayed to extremes by the spirit of mercy (all things in proper balance, remember), suggest that a Newbie who has never heard of the Code should not be considered a violator--that in his perfect ignorance he should be deemed Code-compliant. Perish the thought! If that were the case, we should hide the Code from all Newbies, so that their perpetual compliance would be guaranteed. Ours is the opposite course: The Newbie's ignorance makes us all the more motivated to bring him the Code quickly. His pain will be less.

I stand by my conviction that it is better for an EVE player to lose his first ship very early in his career. I was a new player once. I went out to lowsec and lost a cruiser that I barely had the isk to replace. I hadn't yet heard people tell me that as a new player I should expect safety, or that I should consider PvP to be bullying, harassment, griefing, etc. I learned from the experience--was exhilarated by it, even--and became a stronger player as a result. It probably improved the odds that I would be retained as an EVE player. Destiny took care of the rest.

Oh, and CCP spent a bunch of money on scientific studies which ended up defying their expectations by proving that I'm right about this.