The Temptation That Never Was

Those among you with delicate constitutions, avert your gaze: 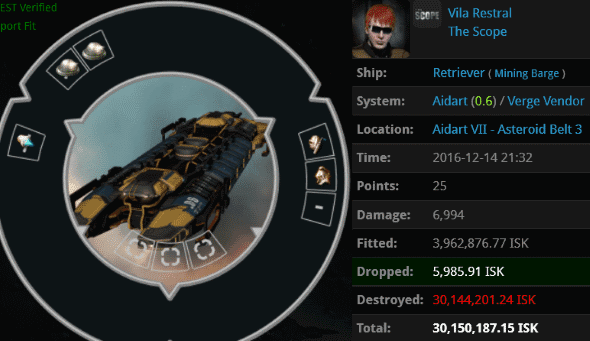 Vila Restral gave birth to an abomination of a Retriever. His barge was equipped with a Civilian Armor Repairer--apparently because his 1MN Civilian Afterburner took the slot that would otherwise have been occupied by a Civilian Shield Booster.

Vila was contacted by the Agent in charge of killing him. The miner didn't handle himself very well. For someone with so many civilian modules, he was decidedly uncivil.

Agent Snigie Audanie urged the miner to be reasonable. Vila chose to throw a temper tantrum instead. Fortunately, Snigie had a back-up plan.

Our Agent cautioned the miner that if his poor behavior continued, he would need to call in reinforcements. Vila saw this not as a threat, but an opportunity. Maybe Snigie's superiors would see things his way?

Agent Sir Demonic joined the convo. Vila and Snigie competed to get their own version of the story out first. Snigie did a better job. Vila panicked:

Agent Salah ad-Din al-Jawahiri was brought into the convo to lower the temperature. Things were getting out of control.

It didn't take Vila long to decide he was being railroaded. He left the trial prematurely and sent an appeal directly to the highest authority he could find: 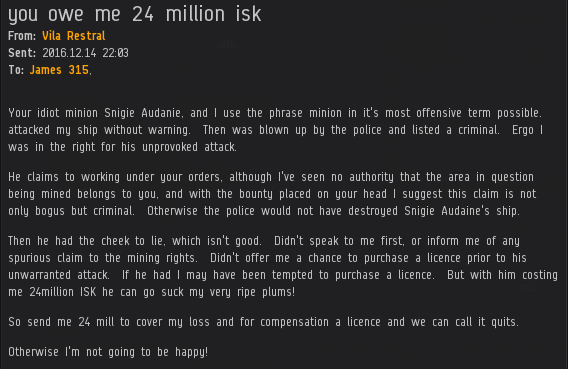 Vila claimed that if he'd been offered a mining permit before the gank, he might have been tempted to purchase one. Similarly, if he hadn't been so rude to my Agents, I might have been tempted to reimburse his loss. Alas, it was not to be. Vila said he wouldn't be happy if he didn't get 24 million isk. But I think we all know that Vila wouldn't be a happy miner anyway--not even if he had all the isk in highsec! For only the Code can make a miner truly happy.
Posted by MinerBumping at 18:24