Why They Hate the Code, Part 2

Previously, on MinerBumping... We decided to do something really brave--to take a deep dive into the minds and motives of our enemies. Now the bestiary begins.

"Try working for your isk honestly."

Our journey begins precisely where you'd expect, with an examination of the Common Bot-Aspirant. As the name suggests, these carebears aspire to be like bots in every way: Maximizing the time they spend AFK and minimizing their level of interaction with the EVE client. They have no interest in creativity or non-routine experiences; they have even less interest in encounters with their fellow MMO players. Needless to say, they do not generate emergent gameplay or content of any kind. They despise PvP.

It's easy to see why a bot-aspirant would hate the Code. The Code outlaws AFK mining and other forms of near-automated PvE. It forces the carebear out of his routine and into encounters with other players. Even being required to pay a token amount of 10 million isk is too much for the bot-aspirant, because the demand comes from a person and not an NPC. And the bot-aspirant hates the New Order because our Agents personify the exact opposite of bot-aspirancy: They're constantly engaged in PvP, creatively designing emergent gameplay and new ways of overcoming obstacles, and are intensely interested in their fellow EVE players.

But consider also the implications of what a bot-aspirant actually does. We can see through their actions that they fundamentally dislike the experience of EVE. Hence their desire to minimize interaction with the game and maximize AFK time. Unlike the PvP'er who always wants to be there to witness the killing blow, a bot-aspirant would be happier if he never had to be present at his keyboard at all. He only wants the isk--or does he?

If a bot-aspirant truly craved isk above all else, he wouldn't be in highsec. He would seek higher-paying forms of PvE elsewhere, even if required him to spend more time at his keyboard. Or he might simply buy a lot of PLEX. But the bot-aspirant often prefers precisely the lowest-paying PvE that EVE has to offer. He wants to feel that he is accumulating isk--no matter how little, no matter how slowly. He wants that accumulation to be as risk-free and low-effort as possible. Gameplay is the last thing he wants from his video game. He is a sorry fellow.

"It's CCP's job to deal with the bots, not yours."

There is a stereotypical image of the Bot: He is a shady character, probably speaks Russian or Chinese, and is involved in EVE for the illicit purpose of generating real-life money. There is some truth to this image. Highsec has always been plagued by RMT'ing bots, often from non-Western countries where exchange rates and difficult economic conditions encourage such activities.

These botters have hated the New Order and its Code from the beginning. Even in the pre-CODE. days, when the New Order consisted almost entirely of bumpers, I would occasionally hear of posts made by botters on their macro-selling forums. The bots didn't like getting bumped. They saw our movement as a threat, and rightly so. But there is another side to the bot "community". 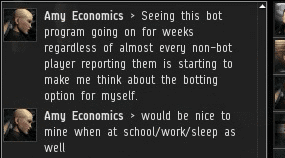 I am of the opinion that many--if not most--highsec botters exist outside the stereotype. They began as bot-aspirants, like any other highsec miner. And then, one day, the temptation to go "full bot" became too strong for them to resist. They weren't motivated by RMT; they had the same motives as any other bot-aspirant. They just wanted slightly less interaction with the EVE client, and the only step remaining was total automation.

The bot-aspirant and the bot have always been closely related. When dragged into the sunlight, a bot-aspirant will tell you he hates bots. He may even--only as a last resort, though--deflect attention away from himself by commanding our Agents to leave him alone and attack bots instead. However, bot-aspirant miners rarely take any action against bots. Though they'd never admit it, most of the time they're too lazy even to report them. They mine right alongside them, sheltering them. And they tell our Agents to let CCP handle the problem. "Don't gank a suspected bot," they say. "You might hit an innocent bot-aspirant by mistake. They look and act the same."

"Why do they have to take things out-of-game?"

There's a lot of nonsense floating around highsec about the New Order: That our Agents commit real-life harassment, that they're sociopaths and bullies, that they hack the game and break the EULA, that they drive away new players. The Gullible Gull hears these things and believes all of them. He is horrified by our imaginary crimes.

Our enemies often spread lies about us. After all, if they only told the truth about us, even more people would flock to the Code than already do. The most gullible EVE players believe the lies not out of malice, but out of sheer ignorance. They think to themselves, "Why else would a blogger say an Agent committed literal torture, unless it really happened?" They have much to learn about EVE.

Just imagine what it must be like to be one of these people who believes every absurd accusation ever brought against the New Order. They think our organization is filled with Nazis and serial murderers, child-rapists and badly behaved twelve-year-olds. No wonder they keep their distance. 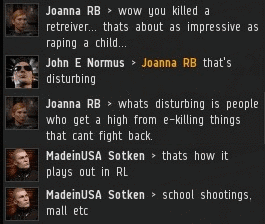 They would be astonished to learn that our Agents are actually the kindest, warmest, most generous people you'll ever find in EVE. In their normal lives, our Agents are firefighters and social workers, clergymen and businessmen and doctors. Knowing our Agents as I do, I would not be the least bit surprised to discover heads of state and Nobel prize winning scientists in our ranks.

But the mind of the Gullible Gull is like a mousetrap: Once its snap judgment is made, it cannot be opened again to grab another idea without much greater effort. The Gull heard something terrible about the New Order, accepted it as fact, and will not hear anything to the contrary. Only a lengthy and thorough exposure to the truth of our Agents can cure him.


Dear reader, we've already learned much about our enemies, but fair warning: We have only scratched the surface.