Today I present to you the one hundred twenty-second edition of the Highsec Miner Grab Bag. To all the carebears of highsec, one might say: Merry Christmas and Happy New Year!

...But carebears are rarely merry or happy. Even so, in the interest of full disclosure, I must say that after writing the preceding EVEmail, Arca Statum took a day to calm down and sent an apology to Agent Pod-Goo Repoman.

Just kidding. Only Gallant miners ever apologize, and Arca is no Gallant. That was a test, dear reader. We'll see a Gallant later on in this post.

Djoi Win didn't appreciate getting the chance to provide our Agent with feedback after being ganked. It's said that people are less happy if they have too many choices--but feedback opportunities? Surely those can only be a good thing.

Djoi condemned the Agents of the New Order and still had enough hate left over for all the Dutch.

Sadly, Djoi would need to wait for another world war (or at least a European conflict of significant scope) to get revenge for his ship and pod.

Back in April 2015, Lana Hita was ganked while autopiloting. It took her a year and a half to send a reply. Let's hope it was worth waiting for:

Assuming Lana's memory is correct, she was busy "doing Uni Coursework" at the time of the gank. Listen, carebears. You can either travel through highsec or you can do Uni Coursework, but you can't do both. Not at the same time, anyway.

ISD BH Supogo declined to buy a mining permit, citing some heretical ideas about evolution. However, these ideas contain some interesting implications. If ISD evolved beyond the need for permits, doesn't that imply that there is a need for permits, and that non-ISD haven't evolved beyond said need? I'm not saying this counts as an official ISD endorsement of the Code, but...

Michael Pergkk gave his corp strict instructions not to invade highsec during the corp's war with CODE. If they can't go to highec, they can't illegally mine there. Sounds like CODE. has already won the war. (The CODE always wins! Always.)

Holystr Charante was convinced that only a "cripple" would attack an AFK player in highsec. But courage, honour, integrity, and elite PvP skill are not disabilities. Regardless, becoming an Agent of the New Order isn't about the body--it's about the heart.

You probably wouldn't expect someone who wrote a message like this to be capable of apologizing, but you might be surprised. Apocalypse023 Gamble sent another EVEmail before Agent Aaaarrgg could even respond. I told you we'd be seeing a Gallant...

No, Apocalypse023 Gamble is solidly in the Goofus camp. This was another test. I do hope you're taking these seriously, dear reader. 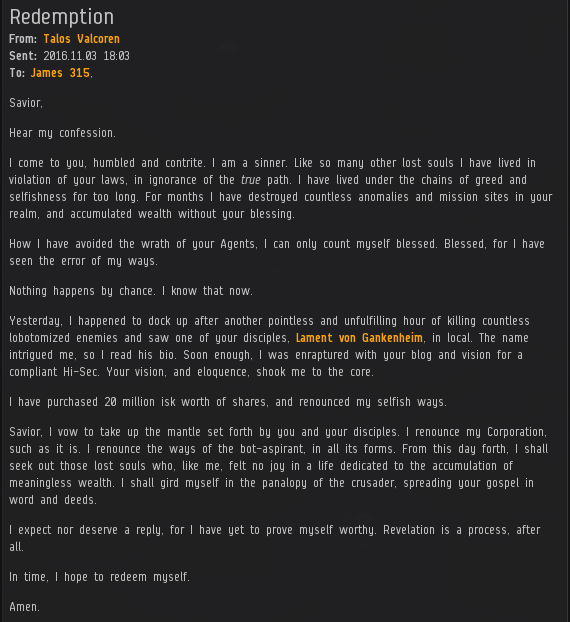 Aha. There's our Gallant. Enjoy the holiday cheer.
Posted by MinerBumping at 18:27