Important people get heckled all the time. Our Agents are accustomed to dealing with hecklers. Agent Aaaarrgg was helping some people play EVE correctly when a miner suddenly began disrupting local chat. 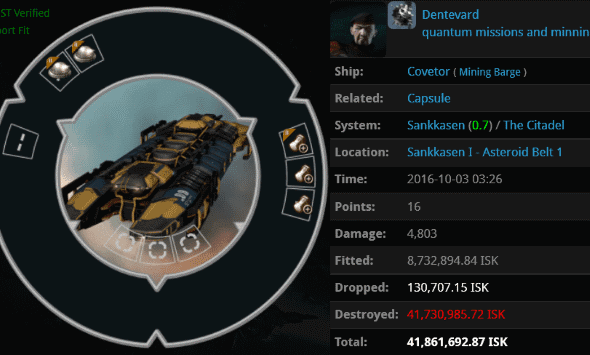 The villain in question was Dentevard, who'd held a grudge against CODE. ever since he'd been ganked in a fail-fit Covetor months earlier. Dentevard was the CEO of his own mining corporation. Look at that Covetor again, dear reader: This is what he was teaching new players.

Dentevard was convinced that Aaaarrgg was some sort of scoundrel--simply because he was affiliated with CODE. and happened to be selling mining permits!

Agent Aaaarrgg had a positive, inclusive vision for highsec's future. Dentevard couldn't believe it; he had more of a zero-sum view of things.

The Code really is universal in nature. Everyone who plays EVE can benefit from complying with the Code. Dentevard was too suspicious and cynical to accept this truth.

Ever since the New Order first came to highsec, miners have accused us of being bullies. After all this time, they still have failed to produce even a shred of evidence to support their claim. And no, miner, shooting spaceships in a spaceship-shooting game does not constitute bullying. You may as well say that using a mining laser on a piece of rock is bullying.

Though he hadn't quit the game yet, Dentevard was obviously unhappy with his EVE experience. One can only imagine the drudgery of mining in highsec month after month, year after year. Aaaarrgg offered him a way out.

Dentevard reacted badly to hearing my name. This raised a red flag.

The miner grew increasingly upset as Aaaarrgg explained the Code to him. Although the prospect of not being ganked anymore must have appealed to Dentevard, the thought of parting with 10 million isk made him sick to his stomach.

The miner's stubbornness proved costly. He now owed Aaaarrgg the sum of 30 million isk. Dentevard had a negative isk/hour ratio for the day. The situation escalated: Dentevard declared himself the leader of a new rebellion against CODE. His attempt to mobilize the local miners failed when he discovered they were AFK.

In just a few minutes, Dentevard changed his strategy entirely. He would now become a miner ganker--the most deadly miner ganker in highsec's history. All permit-owning miners would be targeted for destruction. 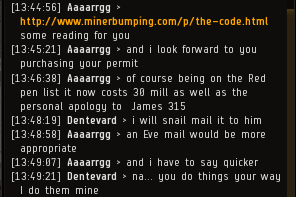 After doing some light research into the mechanics of ganking, Dentevard abandoned his plan to become a ganker. The threat had passed, but those were certainly a tense few minutes.

Bitter and dripping with sarcasm, the former rebel leader could do nothing but sulk. Dentevard had an extra 10 million isk sitting in his wallet, but there was no joy in his heart. Stingy carebears, there's a lesson to be learned here.
Posted by MinerBumping at 17:12