Twilight of the Pods, Part 1

It is said that an EVE player is more likely to stick with the game if he joins a player corporation. The challenge for a new EVE player is how to know whether or a particular corp is good or not.

It used to be a common--near universal--practice, but these days only a small fraction of players are willing to autopilot their pods through highsec. Vrix Nation is one of the main reasons why.

The Vrix crew has been busy. Their goal is to reduce the number of highsec pod autopiloters to a cool zero. Among the carebear population, this is a very controversial policy.

Each gank recipient is sent a message by EVEmail--just in case the message sent by Thrasher wasn't received.

Unfortunately, not all Code violators are willing to listen. You'd be surprised how many happen to be caught in a bad mood.

If you were to survey the thousands of pod losers, you'd find many of the different types of the Code's enemies amply represented.

In order to make progress, a carebear must be willing to blame himself for his loss. If he blames "newbie killers" (despite having played EVE for months or years), that's a bad sign. After all, if the source of your problem is gankers, your problems will never go away; the gankers will always continue to gank.

The Agents of the New Order are truly elite. As evidence of their elite status, only a small number of gank recipients demonstrate the potential to become Agents. Fabio Legolas Uitoh is not a member of that elite group.

The Code violator lives in denial. He doesn't recognize our authority, but judging by the number of killmails we earn, the EVE client seems to recognize it just fine. 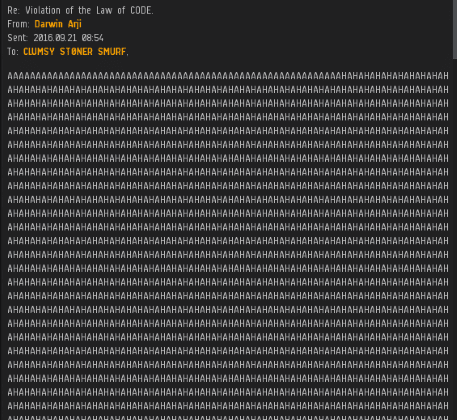 We can see, then, that violating the Code is simply a manifestation of madness.

...A madness which cannot conceal the anguish and saltiness of the carebear.

The soldiers of Vrix Nation march onward. Will they find a potential Agent? Or at least sell a mining permit?

Even the rebels seem to understand that the New Order is a family. Maybe that's why they instinctively wish death upon our family members. Nevertheless, our Agents will not give up on highsec so easily. They must press forward.