Return of the Mad King, Part 3

Previously, on MinerBumping... Fin Udan was one of the most infamous EVE-O posters of all time. Permabanned for repeatedly directing profanity at the ISD, Fin was thought to have disappeared forever. But several months later, he resurfaced under the name Rogue Halo. After revealing his true identity, he registered the name Fun Fin and demanded to know why CCP would associate itself with the New Order.

Fun Fin posted a thread in EVE General Discussion, urging CCP to reconsider its ties to MinerBumping. CCP hadn't responded yet, but other forum posters tried to get him to reconsider his latest crusade.

Fin's whole idea was based on flimsy reasoning and even flimsier reading comprehension. No one was willing to back him up.

The population of EVE-O proved to be surprisingly patient with Fin. They were willing to walk him through the whole issue and show him step-by-step where he'd gone wrong.

Fin wasn't willing to give up so easily. He knew this might be his only chance to take down the New Order once and for all. He had to see things through.

...But the road he'd chosen grew increasingly treacherous. Fin risked losing all of his credibility.

Baffled by the community's reaction, Fin reassured himself: If the posters wouldn't see the problem, someone on the CCP staff would.

And even if CCP didn't agree with him, he still had a few tricks up his sleeve. This was Fin Udan, after all. He never went into battle without a back-up plan or two.

Fin announced his intention to report the whole controversy to The Daily Mail. Of course, if CCP acceded to his demands, it wouldn't be necessary to get the media involved. Incredibly, his threat was ignored. It was as if no one was taking him seriously.

Finally, a member of ISD noticed that there was an open thread on EVE-O and dealt with it.

Fin now understood that he might not succeed in his plan to stop the New Order by quoting MinerBumping out of context. Since his thread in EVE General Discussion was shut down, he switched back to his Rogue Halo character and decamped to the New Order IPO thread in Market Discussions. It was the perfect place to regroup and stage his next offensive.

Of course, any time he posted in Market Discussions, Fin knew he'd be surrounded by his old enemies. No matter. They kept him sharp. 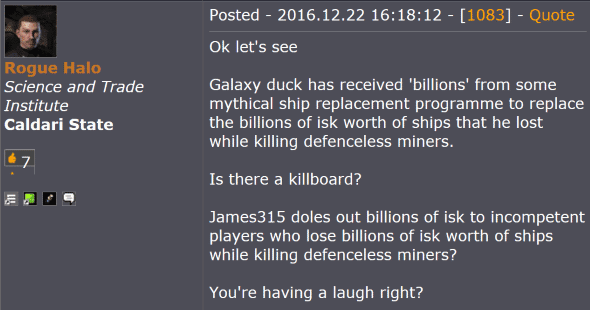 It began to dawn upon Fin how the New Order shareholder program operates. He could hardly believe it. People were spending isk on ganking ships?

Refreshed by familiar surroundings, Fin regained his confidence. He could still stop the New Order; all he needed to do was figure out the right angle. Then he could return to EVE General Discussion and rally an army to his cause. The only thing standing in his way was the ISD. Fin didn't want to go to war with them--not while the New Order still posed a threat. But if war did come, Fin Udan would be ready.

To be continued...
Posted by MinerBumping at 21:07