Twilight of the Pods, Part 3

Previously, on MinerBumping... In the epic battle between Vrix Nation and the AFK autopiloting pods of highsec, Vrix was winning overwhelmingly. But could our heroes win the peace?

The New Order's activities dominate the thoughts of the people of highsec today. But just in case they do forget, they get killed as a reminder.

The Code is about fairness and justice. Even the bot-aspirants tend to realize this on some level, which is why they lie about their crimes.

If the carebears are to be believed, our Agents are really, really good at killing insta-warping pods in bubble-free highsec.

In truth, killing a pod with a Thrasher almost always requires the pod's pilot to be idle or on autopilot. You'd be amazed how often our Agents get EVEmails from people claiming they weren't on autopilot. 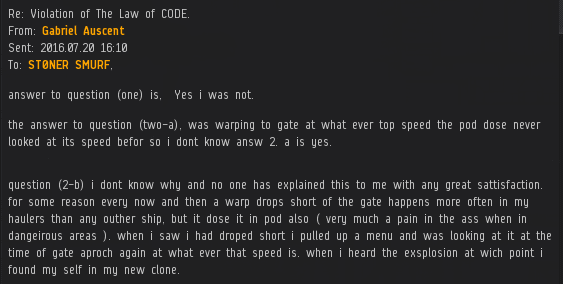 It is technically possible for a pod to warp at "zero" but fall just short of the stargate. This would leave a very narrow window during which a Thrasher might be able to lock the pod and kill it before the pod slow-boats within jump range. Even then, the odds of a successful gank aren't good.

(1) All the more reason not to fly a naked pod through highsec. It's bot-aspirancy to assume safety in a pod.

(2) To kill a pod that's being manually warped through highsec, our Agents must be extraordinarily elite PvP'ers.

Are we to believe it's a coincidence that all of these innocent non-autopiloters just happen to hold heretical, Code-violating beliefs? Doubtful.

If you violate the Code, be honest about it. Sylvarius Shifter was guilty of going AFK and autopiloting his pod, but at least he wasn't guilty of lying.

Of course, candor in a carebear is no virtue when it comes at the expense of politeness and respect for the Code.

We saw Demi Moor earlier. From time to time, carebears will send a tearmail and follow it up with an additional tearmail--unbidden!

Randar Austrene was disgusted by our Agents' practice of putting down pods. More hypocrisy: Randar thought killing pods was too easy. As if it's some impressive feat to go on autopilot and whine when you get ganked?

Perhaps anticipating the counterargument, Randar preempted it with a follow-up.

Several hours later, he amended his remarks to include a warning about EVE losing subscribers if too many autopiloters get ganked. I'm sure our Agent took this point into consideration.

Vrix Nation's investment in highsec paid off when Karl Beck offered a full confession. Despite Karl's excuses, the admission of autopiloting encouraged our heroes. It was a sign: Keep killing pods, and good things will happen!