Previously, on MinerBumping... Agent Super Perforator had quite a project on her hands: Despite losing a Hulk, zhammin refused to buy a mining permit and had a terrible attitude about everything. But zhammin's obnoxious behavior disguised his very real interest in buying a permit. And the more our Agent explained the process, the more zhammin was attracted to the idea.


zhammin > did you see how much shit it say on the damn webside
Super Perforator > please, miner, do not refer to the Saviors words as "shit"
zhammin > i cant read all that alot of what it say i dont no even what it means lol :D im from danmark and never have go in school i cant read so good so its not fair the so much hahahahah :D

At the last minute, zhammin suddenly became resistant. He couldn't imagine himself reading the Code.

Our Agent helpfully summarized some of the finer points of the Code. zhammin got back on track.


Super Perforator > 10 million ISK is not a lot
Super Perforator > our alliance and the New Order will respect a valid permit... ships have been replaced... even freighters.
zhammin > and my ships are fitted the hulk you just blow up ws just one of many hulks i got lol ^^ but i dont got any here tho but in jita damn but i will pay for all menbers we got and yeah 10 mil each but what do you need names or what or you just put our crop
zhammin > i will pay for the hole crop

In fact, the miner was now willing to buy mining permits for his entire crop. Corp, I mean.

The miner was still hazy about some things, but Super Perforator was confident that she'd be selling at least one mining permit that day.

In the end, zhammin chose to purchase 12 mining permits, enough to cover all of the active members of his corporation. Super Perforator counted the money. It was all there.


zhammin > okay cool so now i can mine again with get blow up :D
Super Perforator > well... I will send you mail soon with details.
zhammin > heheh okay :D and thx for you are so chill after i have been a littel bitch you cool tho
Super Perforator > maybe also take time to read some of the website.
zhammin > yeah io have it open still i will look at it befor i go sleep but now i will love to mine :D

The isk came with an apology from zhammin, who was much calmer than he'd been in the immediate aftermath of his Hulk loss. Perhaps there's something to the idea of using medical marijuana to treat bot-aspirancy?

In any case, the experience with zhammin demonstrated why our Agents don't give up when a miner initially refuses to buy a permit. Our wallets are filled with the isk of those who would "never" pay. 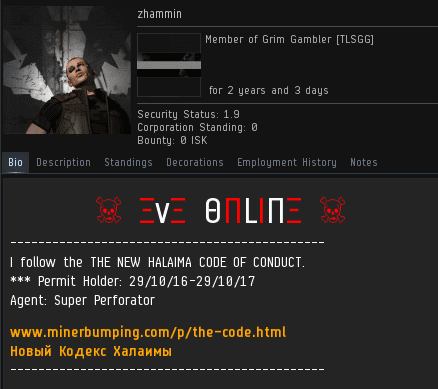 Things were looking up for zhammin--indeed, for his entire "crop". Super Perforator's quick thinking and persistence had saved the miner from a life of drudgery.

Agent and miner walked into the sunset, and they all lived happily ever after. 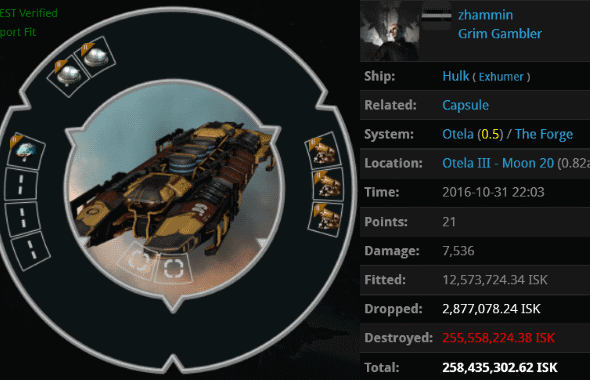 Ah, but life and highsec are messier and more complicated than the fairy tales of our youth led us to believe. Only a few days later, a pair of gankers from CODE. caught zhammin AFK mining with a fail-fit Hulk. 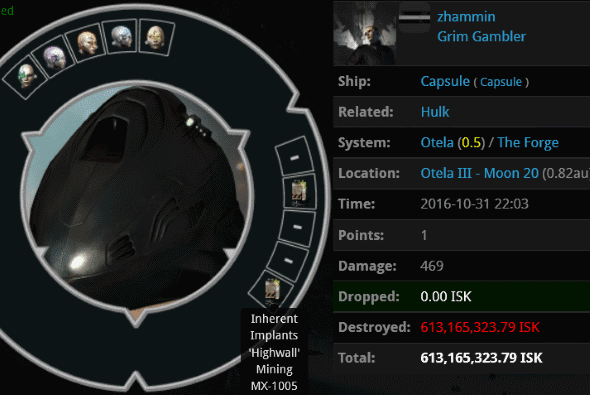 The supposedly Code-compliant miner was further incriminated when our Agents examined the contents of his pod.

Now was the moment of truth for zhammin. Would he redeem himself for his crimes, or would he act like a Goofus and try to shift the blame?

Old habits are hard to break, it would seem. But in the end, the New Order of Highsec will break them all.
Posted by MinerBumping at 16:38