Previously, on MinerBumping... Troubled miner zhammin strongly objected to the destruction of his fail-fit Hulk at the hands of Agent Super Perforator. When it became clear that zhammin was outgunned in highsec, he repeatedly demanded that our Agent move to nullsec.

As the victor in their battle, Super Perforator expected reasonable concessions from his fallen enemy. But zhammin had other ideas.

According to zhammin, the loss of his Hulk was equivalent to buying a mining permit. If that were true, our Treasury would have tens of trillions of isk right now! Our Agent politely explained how the Code actually works.

In spite of everything, the miner had a condescending attitude. Just imagine what zhammin would act like if he actually won an engagement!

Because Super Perforator refused to reimburse zhammin 190 million isk for his dead Hulk, the miner threatened to petition our Agent for scamming.

Super Perforator gave zhammin the New Order version of a GM's "Are you suuuuuure you want to escalate your petition?"

zhammin decided not to file a petition with me or CCP. He pompously announced that he planned to stop mining in highsec so he could begin doing important things in nullsec. But, as it turned out, his smug EVEmail couldn't have been sent at a worse time. 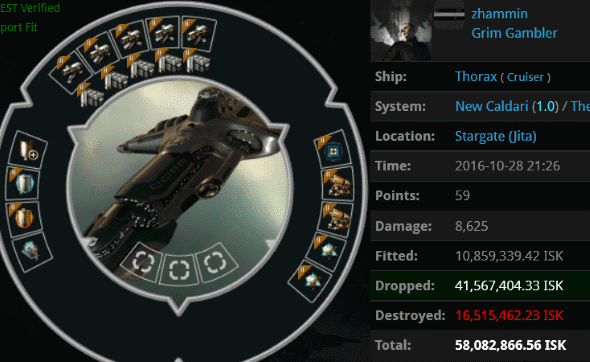 Only minutes before, zhammin managed to lose another ship in highsec, this time a fail-fit Thorax, which was armed with a rack of frigate guns and contained an eclectic cargo including seven Ice Harvesters. zhammin assumed Super Perforator wouldn't be aware of this loss, but thanks to the magic of zKillboard, our Agent was fully apprised of zhammin's doings. He demanded a full explanation from the miner.

zhammin should've been prepared for a question about his Thorax. Obviously he was not.

Ah, the subtle dance of negotiating with a highsec miner. After Super Perforator rejected zhammin and told him to leave highsec, the miner demonstrated a heretofore unseen interest in buying a permit.

And when several minutes passed without a reply from our Agent, zhammin's interest in buying a permit only intensified. Was this miner ready to turn his life around?