Really, miners? You'd rather cry for one hundred twenty-four editions (and counting) of the Highsec Miner Grab Bag--instead of simply obeying the Code?

Helli Trevelyan brought disturbing news of two unnamed individuals being murdered IRL by unnamed Agents of the New Order. Luckily, unnamed ex-employees of CCP are on the case. I'll update everyone if I hear more about this situation. And if necessary, I'll request further information by sending a petition to an ex-GM.

The freighter gankers have gotten quite good at destroying jump freighters before they activate their covops cloaks. The Anti-Gankers, on the other hand, fail regardless of the game's actual mechanics.

Ulv Brandt refused to buy a permit, citing Agent Bing Bangboom's inability to live up to the Code...

...But judging by Ulv's decision to give up mining, it seems Agent Bing is doing precisely what the Code requires.

In the post-gank afterglow, an unusually candid miner admitted that he doesn't care--not about the Code, and certainly not about the game. These are the "players" whose interests EVE should be designed to serve? I think not!

Remember, parents: When you break the law of highsec, you're setting an example for your children to follow. If you want your children to obey your rules and the laws of society, obey the Code!

A few days ago, Agent Ralliana inadvertently brought about the end of the New Order...

The merc army is still mobilizing, I understand.

Agent Snigie Audanie got mixed signals from the Russian miner he ganked. On the one hand, the miner seemed to admit to botting. On the other hand, he suggested Snigie should watch his bank account. Ten million isk incoming?

Maybe the miner will be paying by cash.

Our Agents have become so effective that they can shut down illegal mining operations without even entering the system! 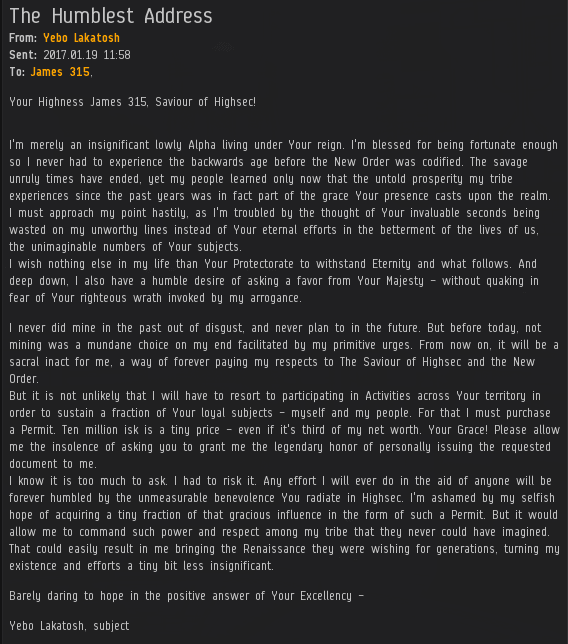 Slowly but surely, highsec miners are learning to show proper respect to their rulers. Things are changing for the better.
Posted by MinerBumping at 19:20