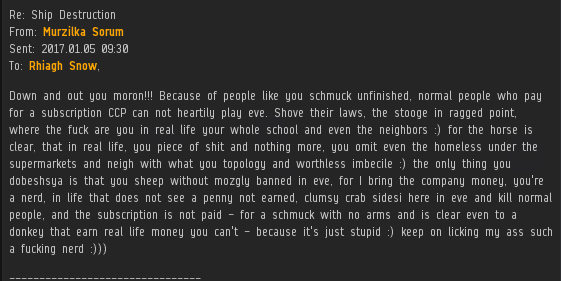 The horse is clear--it's time for another edition of the Highsec Miner Grab Bag!

The only true family in highsec is the New Order family. Members of the "mining community" would sell their own grandmother for a few units of Veldspar.

See if you can spot the name of the Agent. When you're a member of the New Order, every conversation in local revolves around you and your mission. We provide probably 90% or more of the content in EVE today.

Our Agents "collect" tears in the same way a rain gauge collects water. An Agent can sit in a station AFK and still "collect" plenty of tears.

Agent Salah ad-Din al-Jawahiri speaks Russian, and he's not afraid to expand his horizons when a miner introduces him to yet another language... 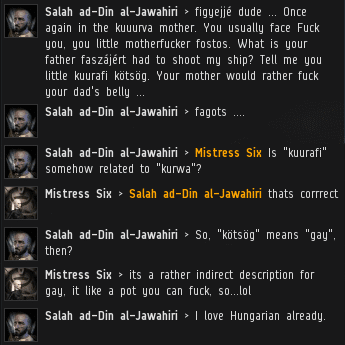 Luckily, the Code's universal appeal allows us to draw upon the most gifted EVE players from across the globe.

To save highsec. Now let's talk about your aspirations. Not to become like a bot, I hope? 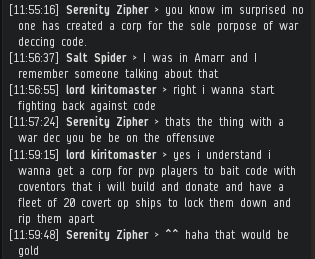 Sizzy Canary claimed that gentlemen from his carebear social circle are more civilized than our Agents. Somehow I doubt it.

Agent Aaaarrgg spotted a few of those "gentlemen".

The translation is a bit rough, but I'm fairly certain Aleks Audanie intends to violate the New Order Bathroom Protocol. 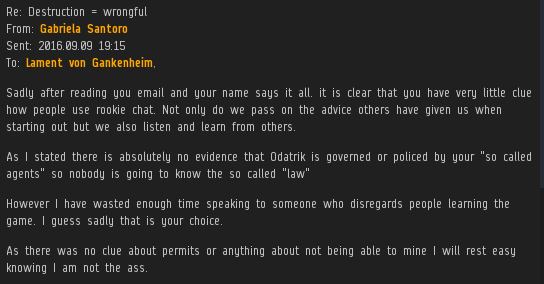 For all Gabriela Santoro's talk about wanting to learn the game, she doesn't seem interested in hearing about the realities of highsec life. As for "evidence", an API-verified killmail is among the most reliable forms of evidence in EVE.

Looks like things are running smoothly in highsec. As any honest miner will attest, the system works. And no wonder, since it's based on the Code!
Posted by MinerBumping at 18:43