Previously, on MinerBumping... After railing senselessly against the Code, VictorStark Stark suddenly proclaimed his loyalty to the mighty CODE. alliance. But some Agents doubted him, and the temptations they set in his path led to VictorStark giving away all of his assets. 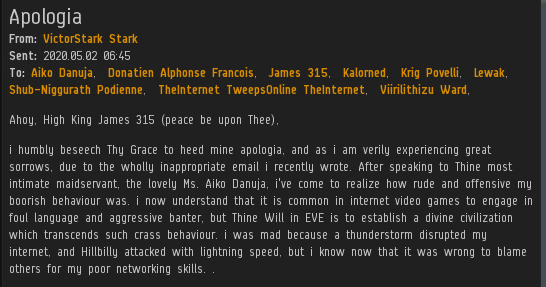 As part of their series of tests, the Agents coached VictorStark as he wrote a lengthy apology EVEmail to the Saviour of Highsec.

To be sure, VictorStark's behavior had been suspicious. Why would someone who loved the Code--and presumably would've read MinerBumping, had his love been true--given all of his stuff to the likes of Aiko Danuja, TheInternet TweepsOnline TheInternet, and the rest?

It seemed to our Agents that VictorStark was indeed motivated by greed and selfish ambition, not the Code. Nevertheless, they decided to give the former(?) miner the benefit of the doubt...

And so the Agents decided to put VictorStark to one final test. 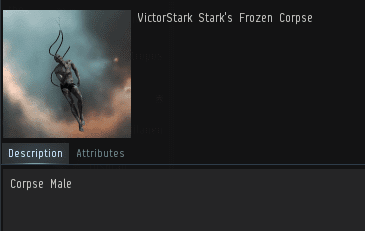 Earlier, VictorStark had allowed himself to be podded over and over. No doubt he did this in part because he expected a doubling/tripling/whatever of his isk. It may also have been part of his mission to gain trust, so that he could later betray CODE. and the Saviour of Highsec. After defeating CODE., he could go brag about it on Reddit.

To see whether this was VictorStark's intention, the Agents told him to get ready to biomass himself.

As the Agents anticipated, VictorStark started to get cold feet. 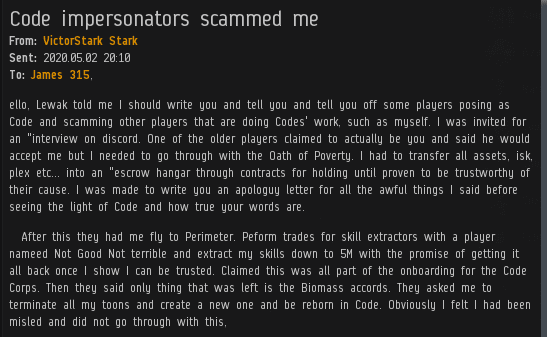 VictorStark Stark was a silly name, and his stripped-down character had no value. Surely he should've been willing to biomass it and create a new, better character. Unless he was planning some harebrained "I infiltrated Code just like I promised!" Reddit post. 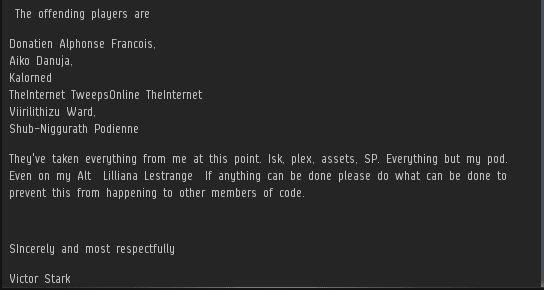 At the mere mention of biomassing VictorStark Stark, the miner began frantically sending EVEmails to every CODE. member whose name he could find. They told him to forward the messages to the Saviour of Highsec.

As the deadline for biomassing his character approached, VictorStark reached out to Agent Super Perforator. He advised VictorStark that if he truly wanted to become an Agent, he should go out and gank some miners. He needed no one's permission. Being an Agent is about enforcing the Code, not getting your isk doubled. But the miner was still focused on getting his stuff back.

VictorStark began to panic. If he ever had any faith, it was long gone.

By now, the miner planned to refuse any requests that he biomass his character. But he never explained why he participated in an isk-doubling scheme to begin with. Nor did he demonstrate any familiarity with the many, many MinerBumping posts that would've warned him against doing so. 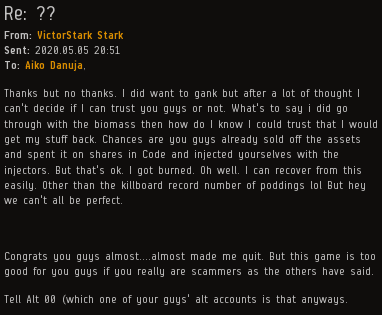 Finally, VictorStark took matters into his own hands and forfeited his assets. Ironically, if he had proven himself to be a decent fellow, he might've been given some financial support from the Agents. But it was clear that VictorStark Stark's loyalty was only to himself and to his own name. 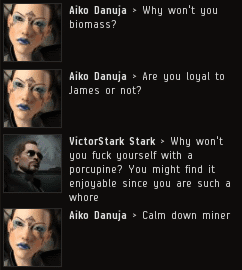 And now that the cat was out of the bag, VictorStark was free to tell the Agents how he really felt.