The Plague of Nakugard, Part 6

Previously, on MinerBumping... When the Nakugard system was in danger, Agent Alt 00 came to the rescue. Incredibly, however, it appeared as though there were many miners who were rooting against Nakugard.

In spite of her many warnings, Alt 00 caught several miners out in the open. She took corrective action against them, just as she'd promised.

With her fellow alts, our Agent ganked and bumped the miners until they could no longer steal ice and ore from the system.

It was strange that miners rebelled and refused to thank Alt 00 for taking care of Nakugard. She realized that something sinister must have been at work.

Without the ability to mine, the miners could've taken the time to improve themselves--much needed improvement, too! Yet they chose to whine and jeer in local chat.

Agent Alt 00 waited out her 15 minute post-gank timers while treating the carebears to some good advice about their conduct.

Yet, once again, the anti-Code types sulked instead of thanking her.

On occasion, good people entered the system and casually voiced their support for Alt 00's mission. Without her, Nakugard would be a sewer. 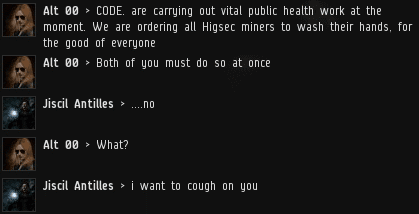 Miners like Jiscil Antilles made no secret of the fact that they were decidedly pro-virus. 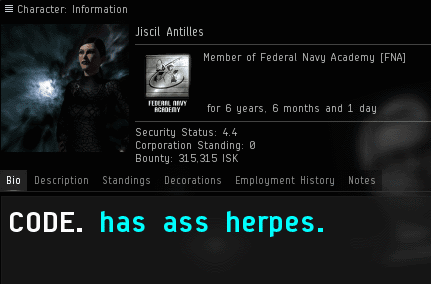 Unsurprisingly, those who were pro-virus were also anti-Code and anti-gank. 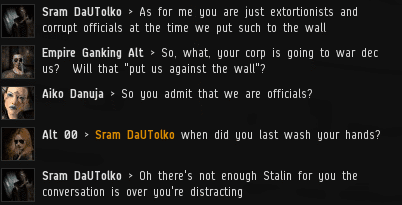 Alt 00 called upon her fellow Agents to assist in dealing with the Nakugard crisis. When miners grew too agitated after being ganked, they were invited to join the "Why was I ganked?" channel.

And what our Agents learned was shocking.