What's Their Beef with Lewak?

The New Order is more than just a network of EVE's most elite PvP'ers. It's a community.

When miners suffer the consequences of disobeying the Code--despite being warned countless times--they often blame our community and the extraordinary Agents who comprise it. Yet these very same miners are quick to confess their crimes.

The unsophisticated miner doesn't bother with "I wasn't AFK, I was just..." Instead, he admits to being AFK. And he doesn't see the problem with it.

So, rather than blaming himself for the loss of his ship, the miner blames someone like Agent Lewak. 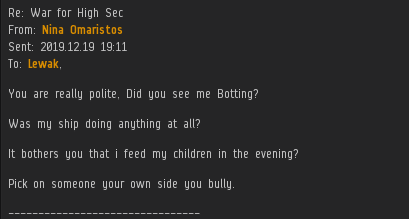 It's bizarre, but miners really do think that their ships ought to be left untouched while they go AFK--even if they go AFK for an extended period. They believe that when their fellow EVE players come across their blingy, idle Hulks, the players should say to themselves, "I'd better not gank this Hulk. Its owner is probably feeding her children. I'll come back in an hour or two and then ask permission to attempt a gank."

But our Agents follow the Code, not the crazy rules that miners dream up while AFK in their "washrooms". So the miners have a fallback position: Don't gank new players.

Listening to these miners, you'd think "new players" were priceless diamonds. Yet they're frequently older players. And even the truly new players struggle to prove that they're worth keeping around.

I mean, how many highsec miners do we really need, especially if we're not supposed to gank them? And a lot of them are using alpha accounts, so it's not like CCP is reliant on their subscription fees.

Agent Lewak has, on occasion, ganked someone who has been playing EVE for "only" three weeks. Apparently Venture pilots should only be engaged in PvP once they reach four weeks. Or ten weeks. Or ten months. Or more.

But an obvious question arises: What's the difference between a two-week Venture pilot and a ten-week one? The art of mining AFK in a Venture can surely be learned in a day or two--even by a highsec miner. So what are they doing during those months of AFK mining that qualifies them for PvP?

As with all other reasonable questions, the miner can only answer with a shrug.

The truth is, miners should be thanking Agents like Lewak. By their own admission, highsec mining is a miserable, life-draining activity. Who's going to rescue them from it, if not our Agents?
Posted by MinerBumping at 18:07