I couldn't reach but a fraction of highsec without the support of my dedicated Agents, who tirelessly spread the Code.

Each Agent shares in the sterling reputation that the New Order has built over the last several months.

It's easy to become an Agent, as the New Order transcends all corps and alliances. An Agent is anyone who acts in the name of the New Order and enforces the Code as he sees fit. 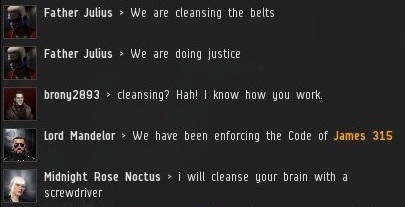 Agent Lord Mandelor sent me a report about Code enforcement conducted by himself and a few other colleagues. 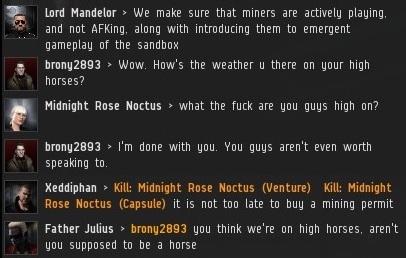 brony2893 singled himself out, attempting to stirrup trouble among the local miners. He spoke balefully about the Code, trotting out the same old lines about "extortion", right out of the gate. Clearly, brony2893 was a brony. I am not concerned about what people do in their private time, but when they mine in my territory, they need to conduct themselves in accordance with the rules.

The next day, Father Julius followed-up to see if any progress had been made. 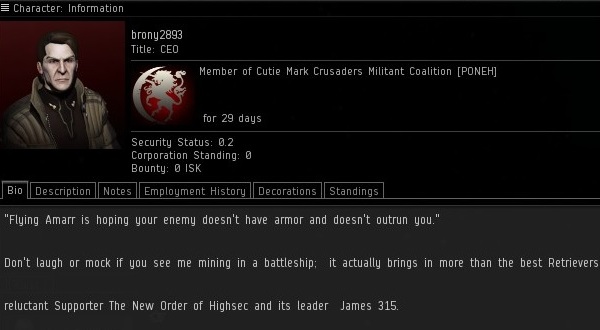 brony2893 had reconsidered and became a "reluctant" supporter of mine. 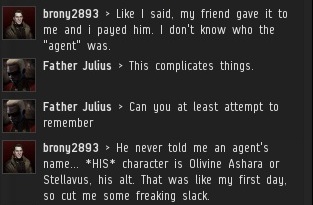 Confusion reigned. Someone had claimed to purchase a mining permit for brony2893, and brony repaid their kindness. But was it legit? 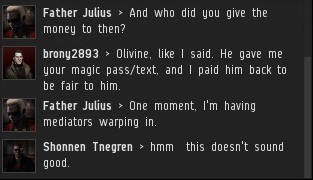 When faced with a particularly difficult problem, GMs will escalate petitions. Agents, too, have the ability to call in the cavalry.

After a careful study, Mandelor concluded that brony2893 was the victim of a "fake permit" scam. 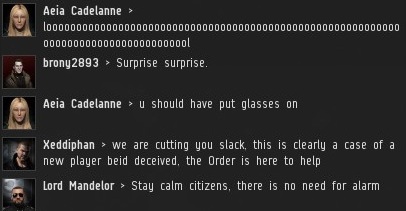 The locals were scandalized, but the New Order was on the case.

Unfortunately, there are always those who will show disrespect to the local authorities, just for the sake of being a rebel. Pissoff2 came out of nowhere and took my name in vain. 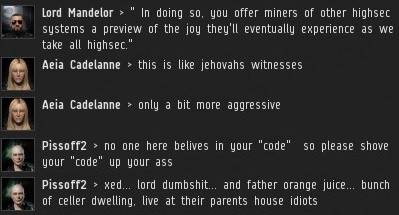 EVE players are taught not to file frivolous petitions, multiple petitions, or to take other actions which may increase the burden on the GM staff. Likewise, highsec players shouldn't do anything to impede the work of my Agents. 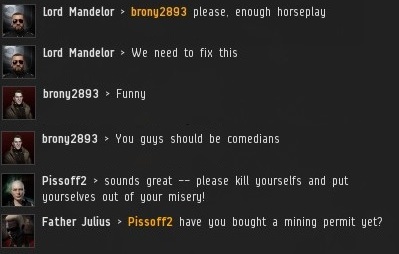 Regardless, the New Order always gets the job done, no matter how long it takes. Mandelor concluded his report to me: "...it seems that the miners here, especially those of Cutie Mark Crusaders Militant Coalition, still need serious education despite those who have begun to pay. I'll let you know if we manage to corral them into line."
Posted by MinerBumping at 21:21