One of the most controversial things I've ever said is that miners should ask me (or an Agent of the New Order, if I'm not there) for permission to go to the bathroom. This issue came up way back in August, and I addressed it in a post right after the website went live. The controversy hasn't gone away.

Just recently I saw someone on EVE-O who brought it up, totally off-topic, and even had her signature quote me. I mean really, that's your signature? An obscure quote about the Code's stance on AFK mining? 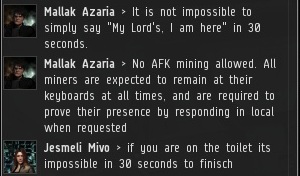 In the two months since I said that, the subject of bathroom breaks for miners has resurfaced time and time again. 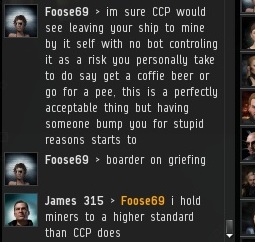 Sometimes it's used as evidence of the New Order's "tyranny". What these miners miss is the fact that they've taken what I said totally out of context, and they've twisted it completely inside-out. Let's set the record straight. 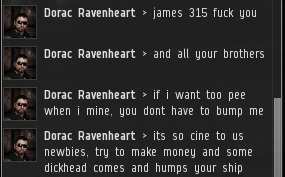 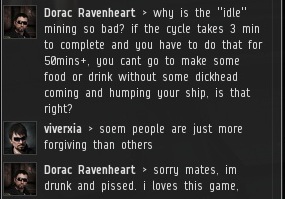 When I explained the Code's prohibition on AFK mining, people asked me, "What if I have to go to the bathroom?" I pointed out the obvious: They should dock up first. But then I added that they could, alternatively, ask me for permission to go.

Note what's actually happening. Miners are not permitted to AFK mine, which means if they leave the keyboard for any reason, they need to dock up. But as a special dispensation, I may give them permission to go to the bathroom without docking up. In other words, I'm being more lenient, not more strict. If they get permission, I relax the rules so they can relax their bladders. 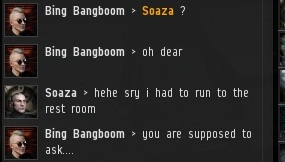 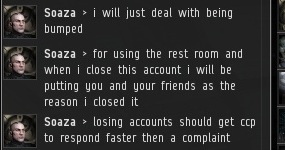 So then miners took my leniency and turned it around to make it sound like I was being more strict, and trying to "control their urination", as one miner put it. Talk about spin! The rebel propaganda machine really earned their paychecks on this one. 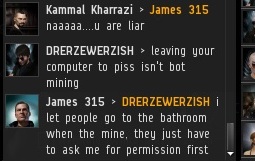 Of course there are limits, as with any rule. It's only for miners going "number one", because they have to sit down for "number two", and I believe sitting anywhere other than at your computer is an invitation to be AFK. Though women generally sit even when only urinating, I still allow them to go. Why? Because I recognize the history of discrimination and the bitter struggle for equality that women have had to go through, and I cut them some slack on that basis. I'm not expecting a Nobel Prize or anything, but yeah, I suppose I am going out on a limb for them in this way, and I can see why people would think of me as a civil rights champion. But I don't do it for the applause. I do it because that's who I am. 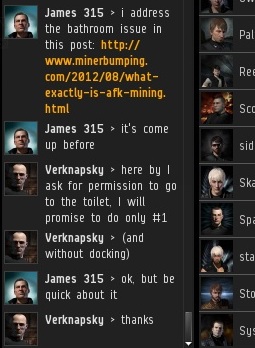 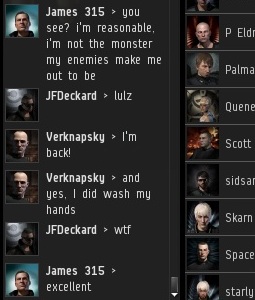 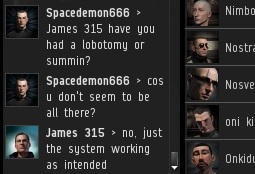 When people follow the Code, the system works for everybody. Do I grant miners a bathroom break every time it's requested? No, but any non-zero percentage is more than they're entitled--let's keep things in perspective. Still, I do often grant permission. There's a reason my name is associated with the word "mercy".
Posted by MinerBumping at 02:14