Rage of the Russian Renegade, Part 5

Previously, on MinerBumping... Rebel miner Mirion Renegade petitioned me for bumping him. Despite his emotional appeal to the GMs, nothing happened. Mirion had no choice but to open a private convo with me--the real authority in highsec.

With only his passion and Google Translate to aid him, Mirion began pouring out his sob story to me. 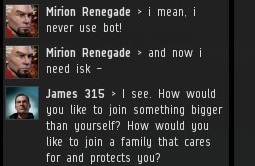 Mirion was alone and adrift. He needed help. He needed the kind of support system supplied by only one organization in highsec that I knew of. 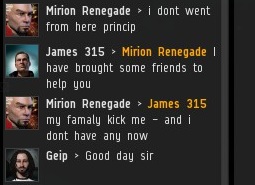 I put out the call to the New Order, and Agents began to join the private convo. 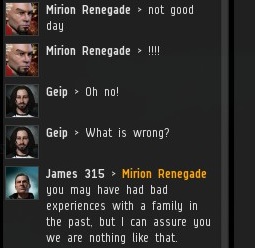 Mirion didn't seem at all bothered by the fact that I invited a bunch of people to crash his private convo. The more sympathetic ears, the better. 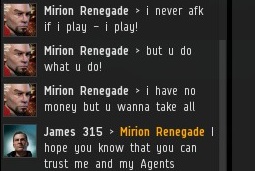 Once again, he claimed poverty. Mirion is a 2010 character. Could he really be down to nothing but a Retriever? Could he have been so reckless? 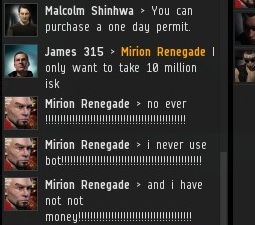 I emphasized the fact that the New Order only required a paltry 10 million from him. Surely he could afford it. 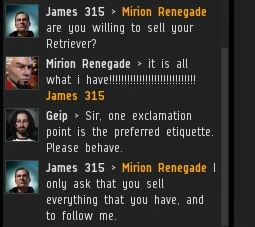 People sometimes ask me why it only costs 10 million to mine in highsec. Given the value of a mining permit, I could charge much more. The market would certainly bear it. But I want the benefits of the New Order to be available to everyone, not just the super-rich. 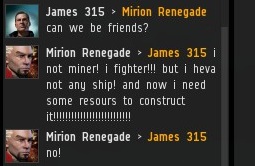 Mirion was candid. He didn't think friendship was possible between us. Like a lot of highsec miners, he insisted that he was not really a highsec miner. He had simply lost all of his combat ships. I guess he was as bad at PvP as he was at mining. 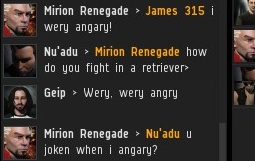 Agent Nu'adu doubted Mirion's PvP credentials. Mirion was appalled that someone would question his military record. 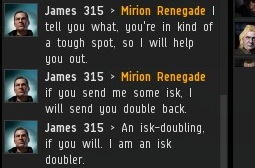 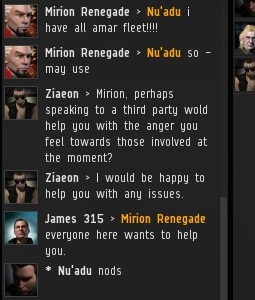 I've learned a thing or two from Erotica 1. I know how much isk-doubling can help people when they're short on funds. Though I'm not a professional isk doubler myself, I was willing to take from my own wallet and match whatever funds Mirion did send. But he ignored me in favor of continuing his argument with Nu'adu. 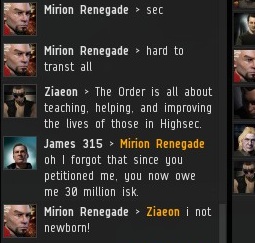 I always err on the side of mercy. I had forgotten all about Mirion's petition, and the fact that he owed me 30 million isk. I presented my new demand to Mirion while I waited for him to translate everything that the Agents were saying to him. 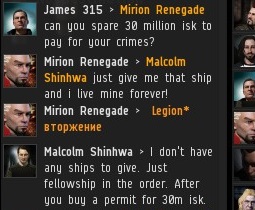 Meanwhile, Mirion insisted that he would leave his mining career behind, if only he could get his hands on a Legion, a tech III combat ship. Apparently he used to fly in Legion fleets, before his old corp lost too many battles and kicked him to the curb. Leave it to the New Order to lift up the broken, and to clean up the messes made by nullsec violence. 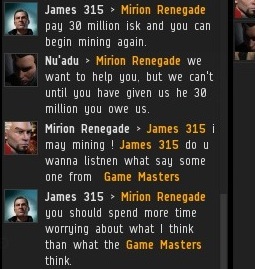 I offered Mirion a fresh start. If he paid his Red Pen fee, he could cut ties with his sordid history of illegal mining, and he could join the New Order family. But for whatever reason, Mirion felt he was entitled to mine in my territory. If he was to make any progress at all, he would need to swallow his pride.