Sins of a Solar Spymaster, Part 1

'Twas another peaceful day in the New Order. Our Agents gathered in a secret channel and patted each other on the back about how awesome we were. When suddenly... 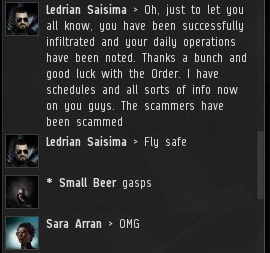 Ledrian Saisima shattered the idyllic scene by dropping a bombshell. He revealed himself to be a master spy, and promptly exited the channel. 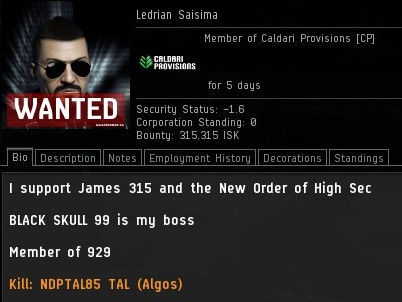 "Who is Ledrian Saisima?" That was the question on everyone's mind. We scrambled to find out as much about him as we could.

We quickly realized that Ledrian had sent me 220 million isk to buy stock in the New Order. Indeed, he was pictured on the MinerBumping panel listing "This Month's Top Supporters". Agent Zed Freelance Zooloo questioned whether ownership of his shares ought to be revoked, given his status as a spy. But the law of the New Order doesn't work that way. Whatever else he is, the man's still a shareholder. 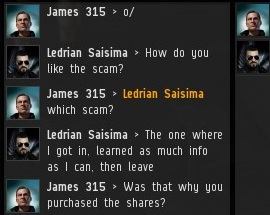 As the New Order's Agents went to work figuring out what had happened, I opened up a private convo with Ledrian. I wanted to hear how he justified himself. 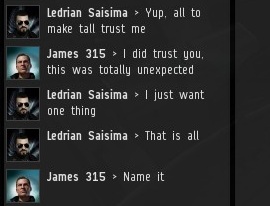 Ledrian wasn't surprised by my questions. He seemed perfectly at ease--as though he had been expecting them.

Meanwhile, our Agents pored over the available intel. Ledrian had claimed to have acquired "schedules and all sorts of info" on the New Order. Our Agents were eager to get copies of their schedules, so as to better plan their lives. 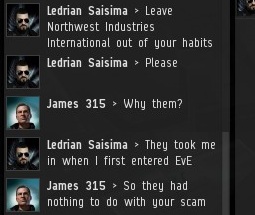 Ledrian knew that by confessing in front of everyone that he was a spy, he was as good as burned. But he asked that the New Order take mercy on Northwest Industries International corp.

Ledrian took full responsibility for his acts of espionage, and asked that revenge not fall upon his contacts and previous employers. 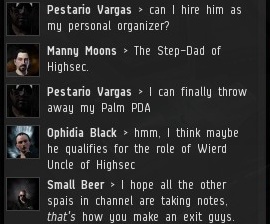 The fallout continued. With its trust having been so betrayed, would the New Order ever feel safe again? 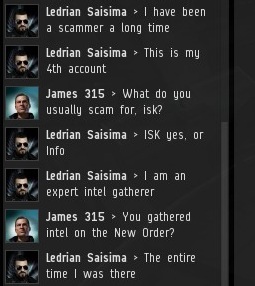 Unprompted, Ledrian began to reveal his backstory. This wasn't the first time he had breached an organization's security. He was an expert. 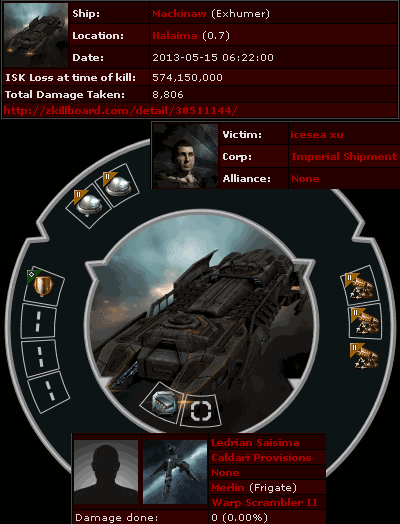 It was then that I remembered seeing Ledrian's name from somewhere else. He had been on a Mackinaw killmail which had been featured on a previous Kills of the Week entry. In that entry, I had remarked upon how strange it was that Ledrian was using a Merlin during the gank, while everyone else was using gank Catalysts.

Ledrian had used the Merlin to help tackle the Mackinaw. It was all part of his plan to gain the trust of the New Order. Quietly, he spent even more money to make up for it. 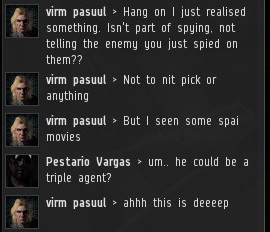 Back at HQ, our Agents were still puzzling over Ledrian's spycraft. What was the point? What had he done? And why was he willing to spend so much isk to do it? 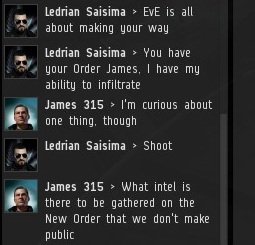 I asked the man himself. The New Order is the most transparent organization in EVE. Our activities are well known throughout the galaxy, and are often featured on blogs, such as MinerBumping. What exactly had Ledrian gained by spying on us?

In looking at Ledrian's profile, stock purchases, and Merlin gank ship, I had only scratched the surface. As Ledrian unveiled his master plan, I was about to find out how deep the rabbit hole went.

To be continued...
Posted by MinerBumping at 20:29