What Gascogne Reingau really means is that it's time for another edition of the Highsec Miner Grab Bag! 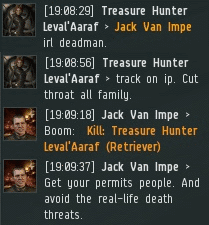 ...in-game, I'm sure. Never get between a Russian miner and his ore.

Even a child in McDonald's, if he has a real gun, poses a serious threat. Unless you pay for a mining permit, that is.

We're still waiting on the extermination. I have a feeling we'll get the 10 million isk sooner.

Relaxing? Hardly. Miners don't enjoy mining; they mine in quiet desperation. Look at the evidence they leave behind.

"I wasn't AFK, I was just [AFK]." This miner said he would buy a permit, but only if it were an item he could purchase "from the office of a station." Bot-aspirants don't get the metagame.

If the New Order were to get its comeuppance when we least expected it, we'd be getting it all day, every day. Then again, maybe we are: Constant victories and success throughout highsec are exactly what we deserve.

The carebear is wrong, our Agents are as human as it gets. I only wish the carebears embraced humanity instead of machinery.

The MinerBumping channel is periodically screened for spies and other security threats. I don't know how someone like Ledrian Saisima gets caught up in such things, but occasionally he does. 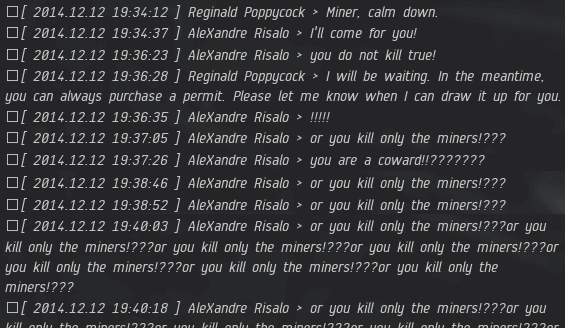 For people who sit around doing nothing for hours at a time, miners can be surprisingly impatient. AleXandre Risalo had a question for Agent Reginald Poppycock and had such a desperate need for the answer that he repeated himself endlessly. On the other hand, maybe AleXandre's career as a miner conditioned him to do everything in a repetitive loop. People don't understand the toll that highsec mining takes. 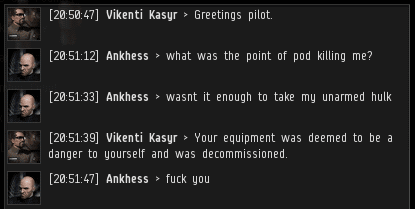 On the other hand, even when a miner does get a prompt answer to his question, it doesn't mean he'll be satisfied.

Ever come across a carebear who's upset about the Code and you don't know why? Sometimes MinerBumping will provide a thorough explanation. Agent Quaker Oatmeal had a baffling encounter with Katsu Hinken. Thanks to The Legend of Katsu Hinken series, it all makes sense--to the extent a carebear can.

Now that Mezerak Erquilenne mentions it, I do feel education reform is important. And it begins in the asteroid belts and ice anomalies and trade routes of highsec.

Agent Rick Therapist put a stop to Ding Woot's bad behavior. As it happens, the miner has the GankingIsBullying blog linked in his bio. Would Ding really pay 10 million isk and follow the Code? It seems unlikely, but...

...the CODE always wins. Ding Woot gave Rick the entire contents of his wallet, just over 360 million isk. EVE isn't for everyone. If you must quit, do it the right way: Give all of your stuff to the person who ganked you.
Posted by MinerBumping at 20:41