How the ISD Stole Christmas

If you've played EVE for many years, you've probably noticed the decline and fall of EVE-O. If it's a cliché to say EVE is dying, then EVE-O is on life support. The once robust, humming center of EVE culture is nearly silent. Many of its subforums have turned into graveyards, mere depositories for the threads kicked out of the EVE General Discussion subforum. It's a sad fact that more EVE players read the average MinerBumping post than read the average EVE-O thread, even those posted in its most active subforum.

Among the factors contributing to EVE-O's demise: Brutal and oppressive moderation conducted by the "ISD". The job of the ISD, some say, is to discover when EVE players are posting about something, and to put a stop to it.

In the post-apocalyptic wasteland of EVE-O, you might think there's no hope--no one willing to brave its dangers to make a post worth reading. However, Agent loyalanon was willing to post. Though loyalanon could have made a post celebrating his status as the #1 ranked PvP'er in all EVE, according to zKillboard, he posted about Christmas instead. He was filled with the Christmas spirit and wasn't afraid who knew it, even ISD. loyalanon started a thread in EVE General Discussion called "Happy Holidays from the New Order of High Sec" and wrote:

The Christmas holiday season is here again and we're in the midst of one of the most happiest times of the year. Unfortunately it is also the time of the year where people are most likely to AFK and/or Mine Illegally!

While you enjoy the precious moments, with friends and family, that this season brings, I ask everybody to keep a proper focus on safety, both at the belts and while docked. Stay mindful of the potential hazards and dangers that mining without a permit can bring.

As we celebrate, let's remain diligent in our efforts to protect the safety and health of all. It's quite easy to lose focus on matters that may seem routine when so much is going on. During times like this, our thoughts are frequently elsewhere rather than remaining at the keyboard and mining with a permit.

Remember: The typical mining environment is a complex place!

Try to maintain your focus on safety by taking a minute to think about the task at hand when you undock and you go about your daily work. Give proper attention to the Code and ensure that all your mining permit documentation is up to date!

Thanks again to everyone, all our wonderful permit holders, Code Fanboys and our Goon overlords for making this all possible.

All of us at Code wish you and your families a Code-compliant Christmas and a Happy, Safe and (legally) Prosperous New Year.

It was a wonderful message. You won't find it on EVE-O anymore, though. 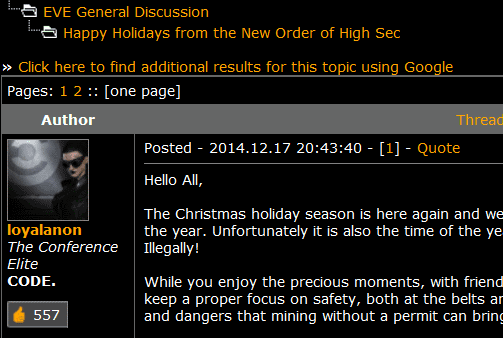 Thankfully, Chribba's EVE-Search archives even the threads that get deleted by the moderators, so you can still read it here. 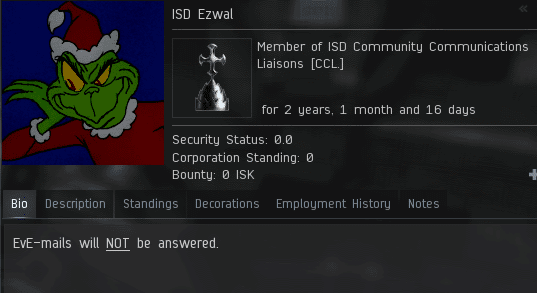 Why did Ezwal exile loyalanon's thread to Intergalactic Summit? Two things we know: First, that Intergalactic Summit is a graveyard subforum with less traffic than EVE General Discussion. Second, that ISD Ezwal has one of the grinchiest bios I've ever seen. It doesn't exactly scream, "I'd be happy to assist you in enjoying the forums!"

After the thread got moved, the few readers of Intergalactic Summit sat back and awaited the trouble they knew it would cause.

You see, the roleplayers of Intergalactic Summit don't take kindly to "OOC" posts such as loyalanon's. 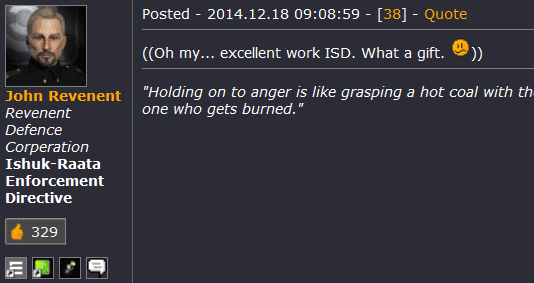 Intergalactic Summit posters always quickly report "OOC" posts to the forum mods. The Christmas message was no exception. You might wonder what happens when players report a thread like this to the ISD, after an ISD moderator sent it to the subforum in the first place. The answer is, things get worse.

loyalanon was given an official warning for "OOC posting on an IC forum." That's right, loyalanon was punished for not posting in-character in a thread in EVE General Discussion, because ISD sent the thread to Intergalactic Summit in violation of their own rules. Combined with some earlier warnings, this punishment resulted in loyalanon being given a temporary ban from EVE-O.

...And then ISD deleted the thread from EVE-O entirely, which is why it can only be accessed via EVE-Search.

If anyone from ISD happens to read this, I encourage them to listen to Sasha Nyemtsov's reading of A Highsec Christmas Carol and see what they can learn from it. I also wish them a very Merry Christmas.
Posted by MinerBumping at 19:23