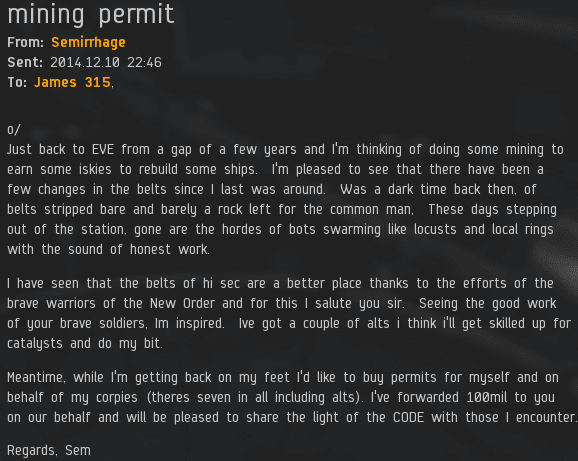 The New Order continues to experience a surge of popularity. The people of highsec are really beginning to perceive the benefits of our rule. The rebels and skeptics would be surprised, I think, by how many miners have gone over to our side lately. 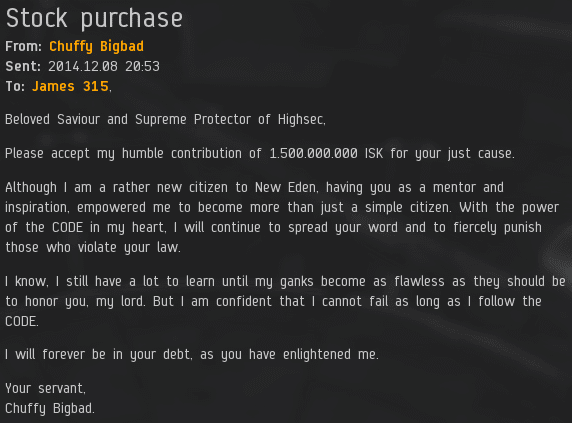 Chuffy Bigbad identifies himself as a "rather new citizen", having only played a month. By embracing the Code, he's advanced light years beyond the typical carebear who mines for years and complains about losing a ship.

Chuffy's off to a great start: 1,500 shares purchased in highsec's best investment fund. We passed the 508 billion isk mark, and Chuffy earned a Supreme Protector's Tip of the Hat™. 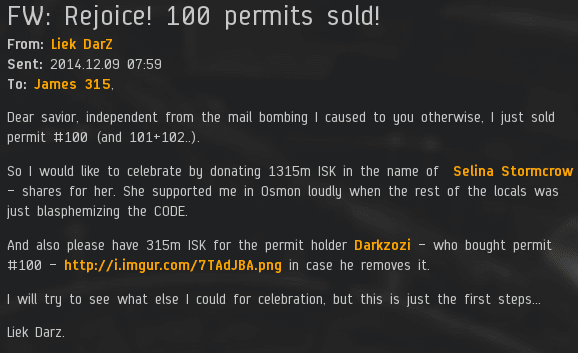 The mining permit business is booming. With the extra funds Agent Liek DarZ got from selling 100 permits, this generosity was bestowed: Selina Stormcrow received 1,315 shares and sent us over the the 509 and 510 billion isk marks. Selina's Double Supreme Protector's Tip of the Hat™ will be a welcome gift, no doubt.

Highsec poet laureate Maria Malukker is taking a break from EVE. Nearly every EVE player does this. But the wonderful thing about New Order shares is that they allow a player's assets to be put to good use--even if a player quits forever or gets permabanned! Maria's 1,000 additional shares sent us over the 511 billion isk mark and earned her a Supreme Protector's Tip of the Hat™. 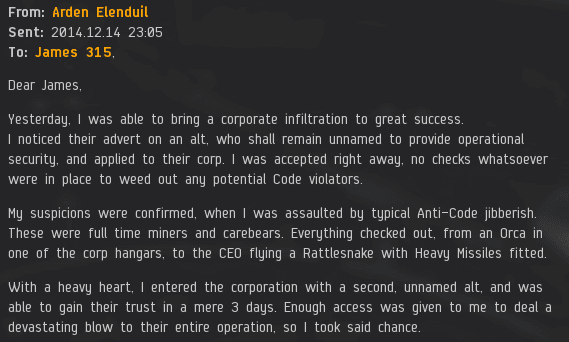 Agent Arden Elenduil sent an unnamed alt to join a highsec PvE corp and found them buzzing with complaints about the New Order. Hint to carebears: Don't do this! Like the NSA, the New Order's Agents like to keep a finger on the pulse of the society they govern. Anti-Order speech is a violation of the Code, and it leaves your corp's assets at risk of confiscation. 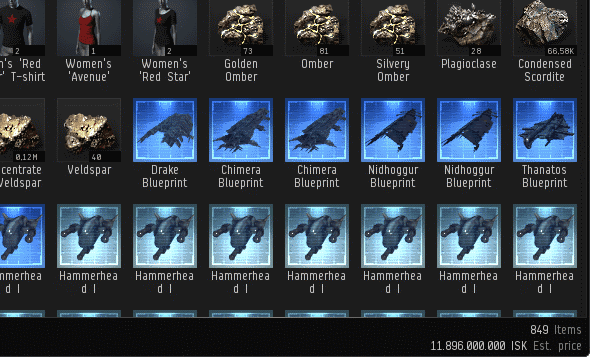 The corporation's trust in Arden's alt was well placed. He took all their stuff, but he gave them a taste of the Code.

Roughly 14-15 billion isk worth of assets were confiscated during this audit. Between this and yesterday's Kills of the Week, it seems a lot of carebears are losing everything. What more can we do to make these people understand that, yes, the Code is a real thing and they need to follow it?

These carebears are such slaves of routine that they don't even notice when they're defeated. Bot-aspirancy--it's a killer.
Posted by MinerBumping at 19:54