What Does PvP Stand For?

One of the many marvelous effects of New Order rule in highsec has been the widespread shift from yield-fit Hulks and Mackinaws in favor of tanked Procurers and Skiffs. Each one represents a victory for the Code. Some miners think they can successfully defy the Code by refusing to purchase a permit, but if they sacrifice yield for tank, they glorify the Code.

Even so, there are still miners in highsec who lag behind the curve. We'll call them "late adopters". When Agents loyalanon and 412nv Yaken discovered a yield-fit Mackinaw mining highsec ice, they saw an opportunity to help her upgrade.

The miner, Hardshaft, wasn't interested. She felt the destruction of her Mackinaw was a breach of protocol.

After barely more than two and a half years of highsec mining, Hardshaft wasn't yet prepared to defend herself against ganks. She felt she'd been blindsided.

loyalanon helpfully reminded the miner that EVE is a PvP game. As such, there's no reason to be upset when someone engages in PvP with you. But Hardshaft didn't see it as PvP. 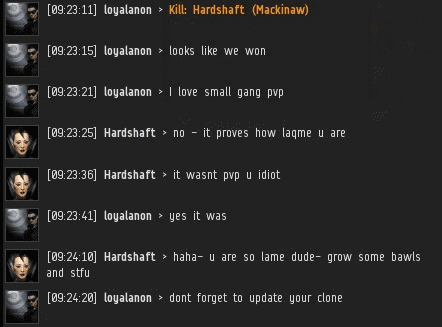 There was no room for debate: loyalanon correctly characterized the battle as "small gang PvP"; two Catalysts versus a Mackinaw. This is a fine example of loyalanon's modesty and integrity. Others exaggerate their PvP prowess by calling a 2v1 "solo PvP". As Agents of the New Order know, solo PvP is strictly limited to 1v1 combat. The two gankers were a small gang.

loyalanon was beginning to see why it was taking Hardshaft so long to get with the times. She moved at a very slow pace. loyalanon had to explain what "PvP" stood for. Since both P's stand for the same word, our hero had a fighting chance of getting the miner to understand. 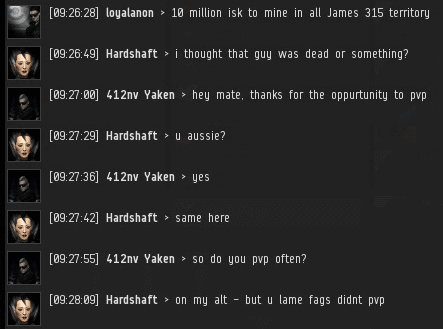 ...A fighting chance is no guarantee. Agent 412nv Yaken, the other ganker, joined the convo, further improving the student-teacher ratio. They wanted the miner to have every advantage. 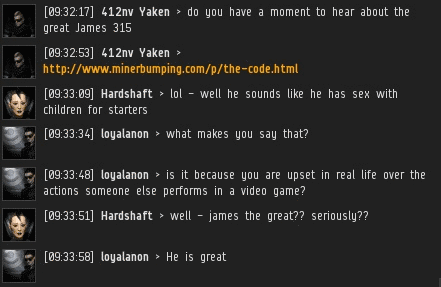 Back in the Dark Ages of highsec, before I started telling everyone what to do, all was in chaos. Each player comes to EVE with a different perspective on how the game should be played. Everyone has a different starting point, but now the players converge on a common endpoint, the Code. 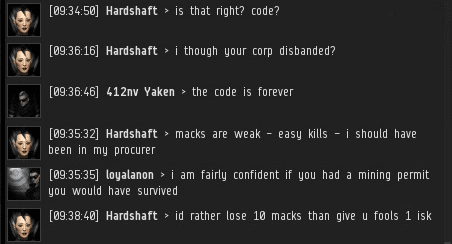 The Code works wonders. Only a few minutes after being linked to it, Hardshaft finally realized she should've flown a tanked vessel. Our Agents were pleased by this breakthrough. However, Hardshaft was still struggling with math. She thought it was better to pay for 10 replacement Mackinaws than send 1 isk to an Agent. I wonder what the carebears would do if our Agents were the ones selling the Mackinaws, too? 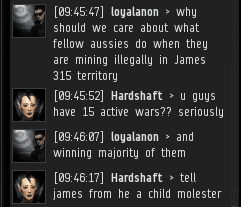 Hardshaft made an abortive attempt to cite her Australian citizenship as a reason she didn't need a permit. Nothing doing. Nationalism is a thing of the past. The Code is the future. Our Agents' common bond transcends international boundaries. We're gankers without borders. 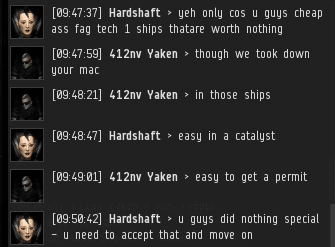 Despite receiving expert instruction from two experienced Agents and a practical demonstration of the New Order's power, Hardshaft wasn't ready to graduate. No one's in a hurry, though. Our Agents aren't satisfied with half-rescuing a miner. They'll spend as much time as it takes to get the job done right.
Posted by MinerBumping at 20:05