How Real Friends Are Made in EVE

It is a truth universally acknowledged, that an EVE player's primary responsibility is to maximize CCP's subscription revenue. (A player may also attempt to enjoy the game--time permitting, of course.) To that end, the playerbase is frequently engaged in conversations about new player retention. It's not enough to treat the newbies with delicacy, or to put them on a pedestal, or even to let them into our corporations. New players are entitled to join good corporations, ones that sufficiently engage them such that they'll stick with the game and keep giving CCP their money. 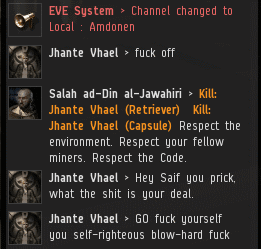 The question remains: How do we engage them? How do we make lasting friendships with the new players? 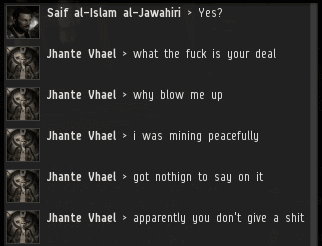 Jhante Vhael isn't a new player, exactly. He spent a year and a half mining in highsec. He was just starting to get good at it, too, before he was blown up by Agents Salah ad-Din al-Jawahiri and Saif al-Islam al-Jawahiri. He invited Saif to a convo and began interrogating him. Extremely impatient, Jhante was from the Jack Bauer school of interrogation. Saif couldn't answer quickly enough to satisfy the miner. 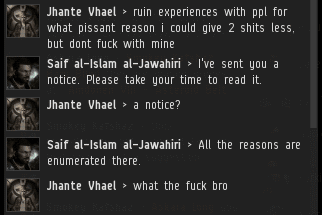 The mistake was Jhante's. He'd already received a detailed explanation by EVEmail. He hadn't bothered to read it. Embarrassed, Jhante checked his mail. 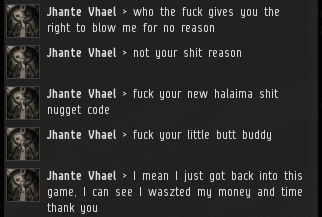 Jhante didn't buy into the Code one bit. He wanted to know where the reasons really were. But Saif was telling the truth! Jhante's interrogation abilities were about what you'd expect from a highsec miner. 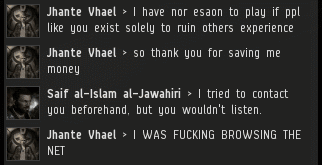 Player retention is difficult, especially when it comes to miners. For people who engage in the most boring, repetitive "gameplay" imaginable, miners are surprisingly difficult to please. If you shoot them without warning, they complain about not being warned. But even if you do warn them, they complain that they didn't get the warning because they were busy "browsing the net". Here's a radical notion: Ask an Agent's permission before you start browsing the net. 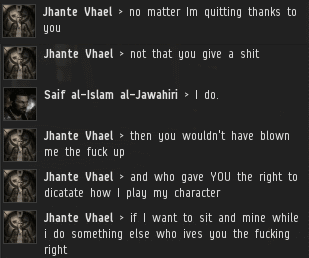 The level of entitlement of EVE players these days is astonishing. Back in my day, we had to travel without the "warp to 0km" option, going 15km to every stargate, both ways. People were shooting at us the whole time. And we were grateful for what we had. 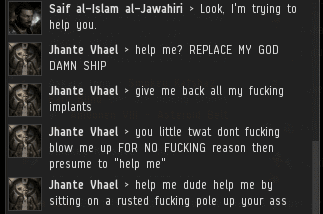 Jhante threatened to shove a "rusted fucking pole" up Saif's ass. In-game, that is. Read the latest Rhea devblog for more information about this upcoming feature. 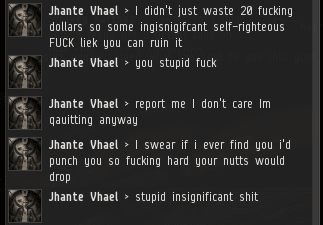 (Rhea will bring us several new combat features, it seems.) Anyway, Jhante griped about how insignificant Agent Saif is. This is another thing miners don't understand. The player who destroys your ship is automatically significant to you. You don't get to opt out of PvP by ignoring the other players in the game. 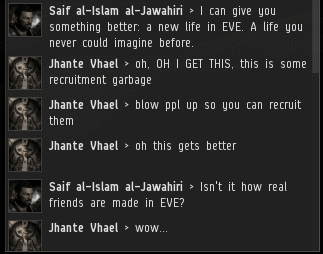 Eventually, Jhante let Saif get a word in edgewise. Taking a deep breath, Saif made his pitch. He invited Jhante to join the New Order, where the miner's odds of being retained would improve through interaction with other players. 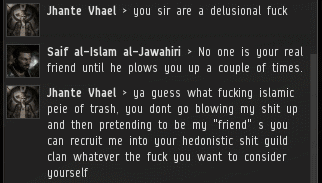 Jhante had other ideas. He didn't want to be retained. 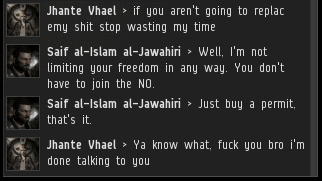 Sadly, Jhante walked out of the convo, and out of Saif's life. Retaining players is a lot more difficult than you might think. Experts say a player is more likely to be retained if he gets involved with a community of other players. Yet the highsec miners want to be left alone, solitary as oysters, completely oblivious to the rest of EVE. How do we force such players to change their ways? The New Order has the answer: It's called the Code. If you want to help CCP make some extra cash, enforce the Code. It's good for business.
Posted by MinerBumping at 19:19