Previously, on MinerBumping... Agent Salah ad-Din al-Jawahiri gathered valuable feedback from miners during his listening tour. But after he destroyed an unlicensed Russian miner, the whole tour was put into jeopardy: The miner claimed to be a CCP employee!

Gharik Kashada isn't the first miner who used his alleged employment with CCP as a bargaining chip. In such cases, a New Order Agent must use his finely honed instincts to determine whether the miner is lying.

The good news is, it's easy to tell when a miner is lying. Truthful miners carry permits. They don't steal from the New Order.

Caught in a lie, Gharik's fate rested in Salah's hands. Agent Rabe Raptor assisted in the interrogation. Sometimes Agents work in pairs. It's like "good cop, bad cop", except that all our Agents are always good. 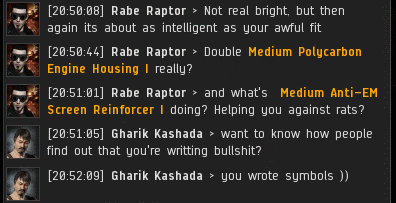 Gharik refused to be lectured about his fail-fit mining barge. He retreated from the convo. The miner ceded territory and our Agents held the field; they were victorious. Gharik was petitioned for his impersonation of CCP personnel. 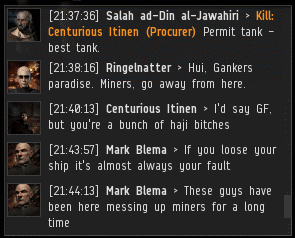 And so Salah continued his journey throughout highsec. He discovered the carebears were in various stages of development. Miners make progress at different speeds, but they'll all wind up at the same destination. 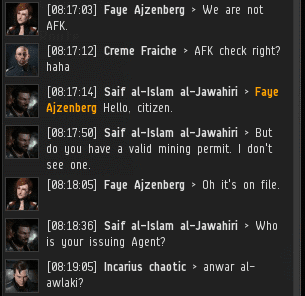 Salah was gratified to see that when he entered local, even the non-compliants acknowledged the need to prove that they weren't AFK. The mere presence of an Agent in local is enough to keep some rebels at their keyboards.

Nevertheless, some pockets of resistance remain. Gamma Dranic said, "You may have numbers but the rest of the world is starting to unite against your horrible cause." I'm not sure if he was talking about the New Order or Islam, or if he sees a distinction between the two things. He was a Code violator regardless.

With the passage of time, miners began to trust Salah a bit more. Lena Mendez confessed to playing another game while mining, and she promptly self-deported. 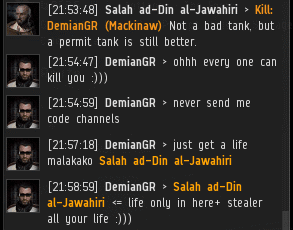 Many tongues are spoken in highsec, but the Code is the universal language. Miners from everywhere in the world recognize it now. 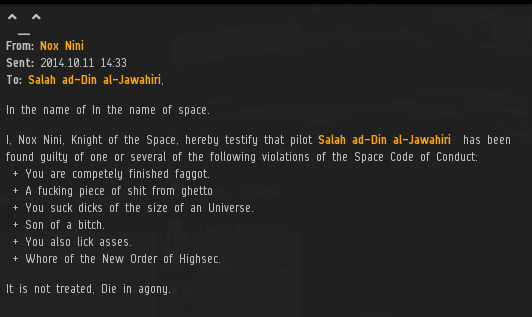 After ganking AFK miners, Salah solicited feedback via EVEmail. He received responses such as this one from Nox Nini. Not every miner treated the survey with the seriousness it deserved. 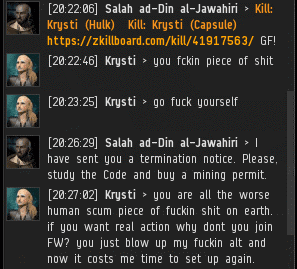 Ultimately, the listening tour proved fruitful. Salah was able to get in touch with all sorts of miners. Some, like Krysti, helped prove the New Order theory that highsec risk/reward is skewed and encourages nullsec players to make their money here. The Krysti character has been playing EVE for eight and a half years. She was even a well known member of the Mercenary Coalition alliance during its heyday. Now Krysti is nothing but a highsec miner.

Salah took note, and wrote down his conclusions: What the carebears of highsec need most is the continued enforcement of the Code. Mission accomplished!
Posted by MinerBumping at 19:24