The MinerBumping comments section was won by a fellow named The Colonel this week, who posted the following quote in response to a whiny carebear:


"If you can't take a little bloody nose, maybe you ought to go back home and crawl under your bed. It's not safe out here. It's wondrous, with treasures to satiate desires both subtle and gross. But it's not for the timid."

Taken from an episode of Star Trek: The Next Generation, the line is spoken by a member of the Q Continuum (basically the Trek equivalent of the New Order). Though the line was directed at Captain Picard, it certainly fits EVE well, doesn't it? 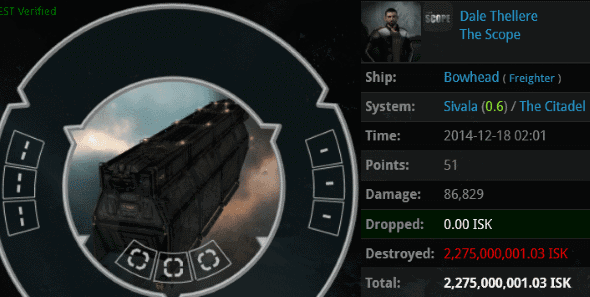 Dale Thellere just finished building a new type of freighter, the "Bowhead", which was added to the game in Rhea. He was in a hurry to go AFK with it--and he became the very first pilot in EVE ever to lose a Bowhead. Agents John E Normus, Capt Starfox, Doomchinchilla, loyalanon, Gunther Cucs, Kahvegi, AoshiKeshin, babocheets, Sasha Cohenberg, iZaEaRl, Keraina Talie-Kuo, Krominal, Misty Stenier-Tian, Michele Bachmann, and Lisa Tears got in on the kill. 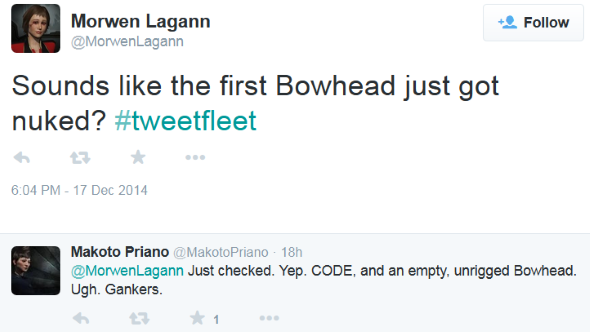 As you might imagine, the EVE community was appalled to see CODEdot responsible for the first ever Bowhead kill. They were busy trying to pretend we don't exist. It's a strategy that never works. Just ask Dale Thellere.

BONUS! You can watch the destruction of this historic kill yourself, in this YouTube video of the gank!

...And because the New Order always goes one step beyond, we went ahead and ganked the second Bowhead ever killed, too. Unlike the first, it was tanked. It still lacked a permit. 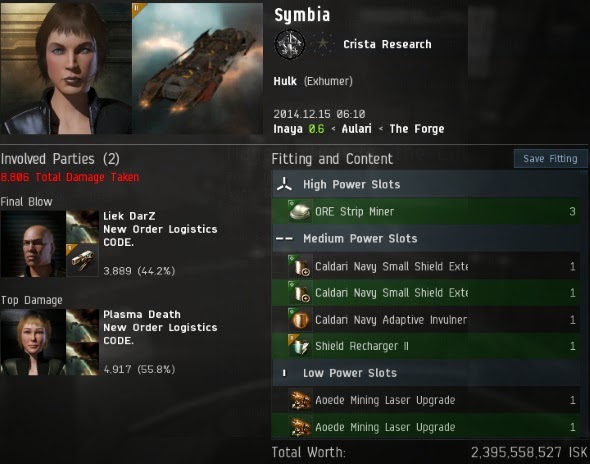 There was fierce competition for the most expensive miner kills this week. Weighing in at 2.4 billion isk, Symbia's bafflingly blingy Hulk won the title. Agents Plasma Death and Liek DarZ executed this rebellious miner. 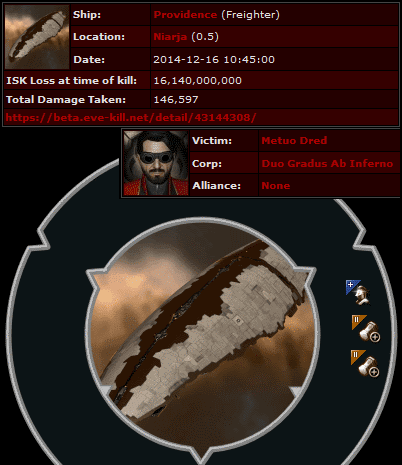 ...He was, after all, carrying unlicensed mining equipment. Eight billion isk of loot was recovered from this gank. However, Metuo Dred himself was unaware of this.

Metuo Dred assumed he'd saved himself by logging off during the gank. Ctrl+Q can't save a carebear though; only the Code can. 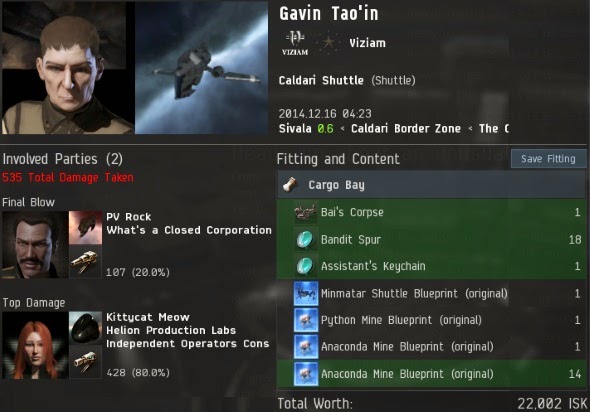 Gavin Tao'in was autopiloting in a Shuttle. That's not uncommon, but carrying a bunch of rare BPOs in the cargo? That's peculiar. Agents Kittycat Meow and PV Rock made the BPOs even more rare. You've probably heard of Agent PV Rock, but Kittycat Meow is a new addition to our ranks: 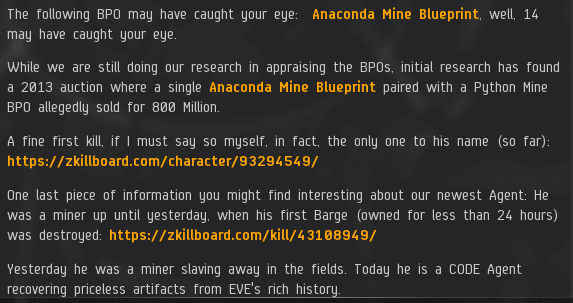 Kittycat Meow listened to the call of the Code and went from miner to hero overnight. Miners rarely make history, but Agents of the New Order always do. Just ask PV Rock, whose killboard could fill a Kills of the Week post all on its own.

Take, for instance, PV Rock's destruction of an unlicensed Venture:

Enraged Frank managed to lose a Venture worth a billion isk. It was carrying--you guessed it--a bunch of blueprints! If we keep getting kills like this, highsec will be covered in blueprint confetti.

PV Rock also managed to snag the podkill of the week: 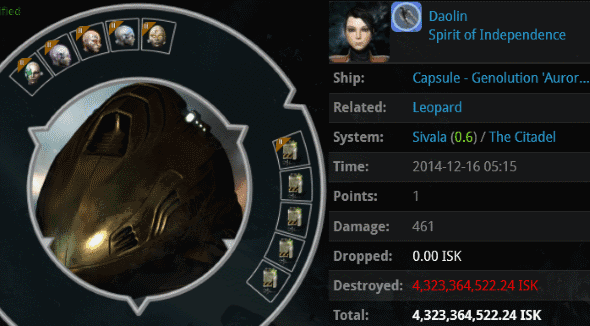 Daolin's implants shattered like crystals in the face of Agent PV Rock's courageous attack. 4.3 billion isk was lost in an instant.

Carebears, you slave all year 'round, gathering your isk like so many strawberries. If you don't buy a mining permit and obey the Code, that could all be taken away from you in the blink of an eye. I urge you to send in your 10 million isk and pledge of loyalty today.
Posted by MinerBumping at 23:15