The Legend of Katsu Hinken, Part 1

In the dark ages, before the New Order, highsec was boring, predictable, and unchanging. Today, highsec is alive. One of the most important characteristics of living things is that they continually change. You might say that to be alive, is to change. A single event can result in a remarkable departure from one's previous course. So it is with highsec today. 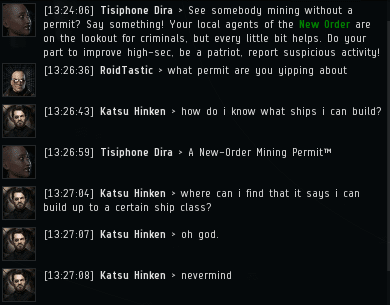 Agent Tisiphone Dira was wandering through Hek and advertising mining permits in local. An industrialist named Katsu Hinken just happened to be in local at the same time, asking for advice on how to build ships. Theirs was a chance encounter. Yet it would change both their lives forever.

When Katsu's questions about ship building were interrupted by Tisiphone's advertisement, Katsu became extremely defensive. He attempted to erect a wall between himself and the Code.

Others in Hek local weren't impressed. It's hard out there for anti-Order rebels these days. Annoyed by the ridicule he received in local, Katsu invited Tisiphone to a private convo. He wanted to be absolutely certain she got the message about not interfering with his business.

Katsu meant business--and not the permit-purchasing kind, either. He reminded Agent Tisiphone of the New Order's recent defeat at the hands of the Goons. Wait, that's a thing that happened? I was just getting used to the idea that CODE. lost its nullsec territory in a war with TEST.

Tisiphone was surprised by Katsu's vindictiveness. All this because she interrupted his silly questions in Hek local? Though the situation with Katsu was serious, he gave her mixed signals. First he told her to worry about the possibility that she was messing with a powerful nullsec coalition leader. Then he told her not to worry about who he was and what he did.

Katsu dropped another bombshell: GoonSwarm and Pandemic Legion created a new coalition for the purpose of defeating CODE. Interesting. I really need to read EveNews24 more often; I hadn't heard about any of this stuff.

As an Agent of highsec's most powerful fighting force, Tisiphone had good reason to express her confidence. But Katsu had some inside information about an imminent awox attack against the New Order. Or at least there was probably a spy or two. Or not, who knows.

Tisiphone became increasingly confused. Katsu issued another dire warning: Stay away from my entity! But he refused to name the entity. Without more information, Tisiphone would need to stay out of everyone's way to avoid disturbing the secret entity. The New Order would be paralyzed.

To avoid drifting into a stalemate, or getting surrounded on all sides by entities, Tisiphone invited the carebear to embrace his individuality. Katsu didn't need to be another Miner Bingo stereotype. Tisiphone urged him to make an original threat.

Our heroine didn't know what she was in for. Katsu, the intrepid reporter who broke the news about the Goon/PL anti-CODE coalition, had some theories about Burn Jita. All Tisiphone wanted was to sell Katsu a mining permit. Instead, she found herself in the middle of a conspiracy--and targeted by a mysterious entity, one whose power brokers operated at a higher level than she could ever have imagined.

To be continued...
Posted by MinerBumping at 19:35