Previously, on MinerBumping... JTClone Ares spent months recruiting carebears into his rebel alliance, The Clone Republic. He didn't know how to strike against the New Order, so he just kept on recruiting. But then, two days before Christmas, he was contacted by TheInternet TweepsOnline TheInternet and Captain Rick Tyson. They claimed to have a high-level spy in CODEdot, and they needed JTClone's help in bringing the New Order down.

Although initially concerned that he might be walking into a trap, JTClone couldn't resist joining the conspiracy. Especially since it mostly involved "someone else" doing something to stop the New Order.

TheInternet started to unveil the details of the plot. It involved a major heist of New Order assets. 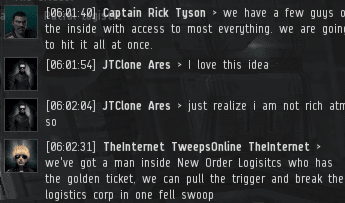 Captain Rick added that there were actually multiple spies in the New Order who would assist with the plan. At least one of them, according to TheInternet, had a "golden ticket": Full access to New Order Logistics, the largest corp in CODEdot. 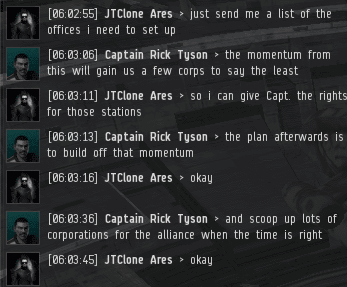 For the last two and a half years, the New Order has been completely victorious, winning battle after battle. But Rick believed that a spectacular heist would change the momentum of the war. Finally, the rebellion might have a chance. JTClone nodded along agreeably. 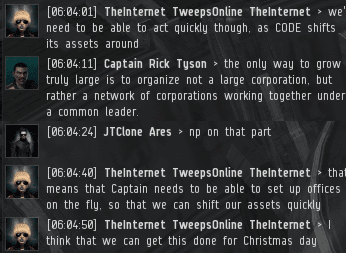 To fully exploit the positive effects of the heist, the resistance would need a single leader. JTClone immediately saw himself in that role.

If JTClone wasn't sold on the conspiracy before, he was now. This was his chance to wrest control of highsec from its democratically elected leader. For his own part in the heist, JTClone would need a ship--and a well-tanked one at that. (To a carebear, "tanked to high heaven" means the ship has at least a small shield extender to go with its cargo expanders.) 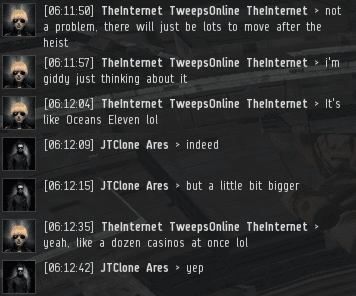 The conspirators grew increasingly excited. Visions of stolen CODEdot loot danced in their heads. They could already taste the rebel victory which had so long been denied them. 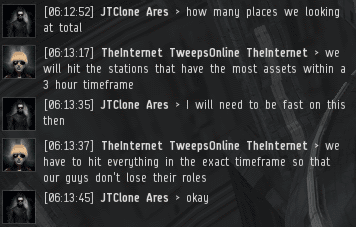 Because the New Order has its assets stored all throughout highsec, the heist would need to be perfectly timed and coordinated. The slightest mistake could result in failure.

JTClone was all-in. Now he only needed to know when to be online so he could take part in the heist. His job would be to ensure that all the stolen assets got transferred to offices under the control of his alliance, The Clone Republic. 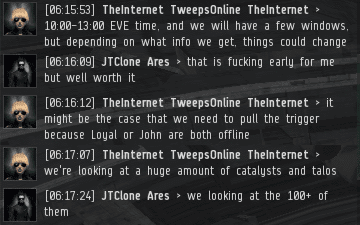 Unfortunately, this would need to be an "alarm clock op", well outside of JTClone's preferred time zone. No matter. A little sleep deprivation was a small price to pay for one hundred stolen Catalysts. 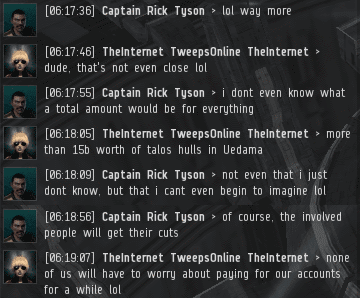 Actually, the New Order has far more than a hundred gank ships in its possession. It goes through a massive amount of hardware each week. Captain Rick and TheInternet estimated more than 15 billion isk of ships in Uedama alone. The total heist would net the conspirators tens of billions. With that much isk, they would all be swimming in PLEX!

Upon learning the full scope of the plan, JTClone could barely contain himself. He once again affirmed his willingness to participate in the conspiracy. There was no mistaking it now: JTClone Ares was a rebel carebear. The conversation was clear evidence of his intent to commit treason against the rightful rulers of highsec. If the dastardly plot succeeded, it could very well mean the end of the New Order.

To be continued...
Posted by MinerBumping at 19:00