There's nothing new about an organization seizing control of territory in EVE. In fact, it's the whole point of the game. What makes the New Order's conquest of highsec so unusual, is the motive. The New Order doesn't seek treasure. It doesn't covet power or glory, though it has those things in abudance. Nor does the New Order aim to impose its will on others (though our subjects' absolute obedience is required for practical reasons). Rather, the New Order is motivated by the desire to improve the lives and gameplay of everyone in highsec. The New Order is fueled by altruism. 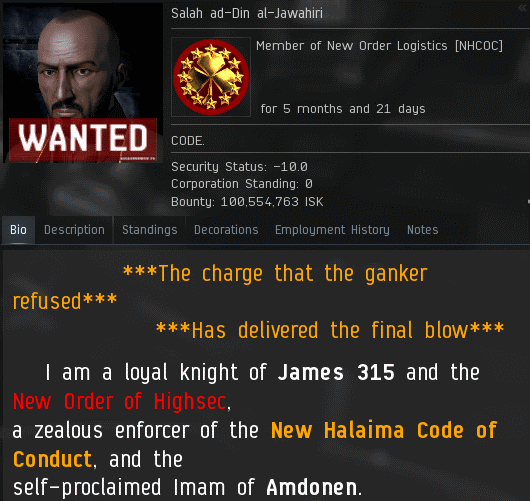 Agent Salah ad-Din al-Jawahiri has a restless soul. He doesn't sit on the sidelines and watch carebears wallow in misery; he takes an active role. But Salah knows that even a skilled Agent such as himself has room for improvement. He can rule the carebears better. How? Salah embarked on a listening tour throughout New Order territory to get ideas and input directly from the carebears.

Again, pragmatism requires that the New Order kill miners. Salah knew his listening tour wouldn't be a success unless the carebears were willing to return to their keyboards and speak with him. So he enforced the Code, slaughtered their barges and exhumers, and sought feedback.

Even today, highsec mining permits remain a subject of some controversy. The truth is, there are always going to be those who complain about taxes, even when the tax rate is astonishingly low. Some people just don't want to pay their fair share. 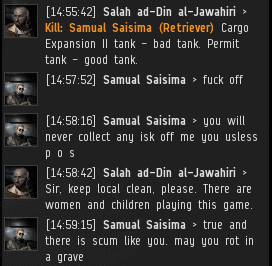 A few carebears consider themselves to be in the mold of an American revolutionary: "Give me liberty or give me death," they say, dying. What the carebears forget is that the revolution already took place. We won. There's no tyranny to rebel against, now that the New Order is in power. Time to stop complaining about taxes. Time to start paying them. 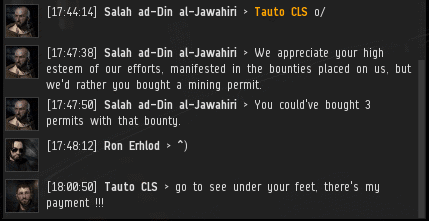 Salah patiently listened as the carebears repeatedly suggested that the mining permit be abolished. A pipe dream. Mining permits will be abolished the day after mining itself is abolished. 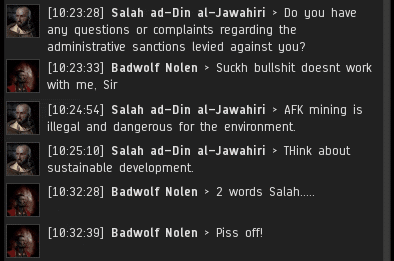 Not every miner was willing to participate in a productive manner. This didn't discourage Salah, however. Response rates are an issue in every kind of study. 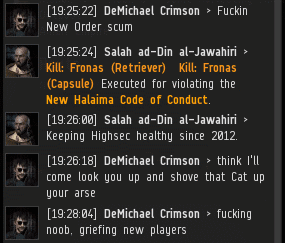 One of the more common complaints: The New Order's treatment of "new players". The idea that we target newbies has been debunked time and time again. Even with the most liberal definition of "new player", the charge simply doesn't hold water. In reality, our Agents disproportionately come from the ranks of new players. Partly that's because we provide a welcoming environment. Another reason is because many players come to EVE specifically because they heard about the New Order and wanted to join us. As for the "new players" we gank, they tend to be several years old. 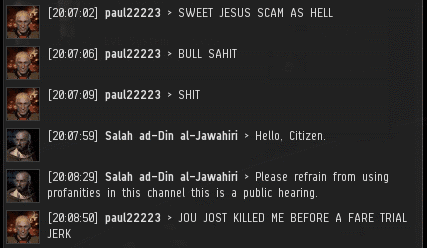 Wherever Salah went, crowds followed. People like paul22223 were so excited, they could barely contain themselves. It's a perk of being one of our Agents: Instant celebrity.

It's a testament to the character and integrity of our Agents that they don't let all the fame and power go to their heads. They're remarkably humble and restrained. No one mistakes this for weakness, however. Our Agents have gravitas.

Former barge owner Falcore62 took issue with Salah's treatment of him. Falcore62 claimed to be AFK only because he needed to answer his door. Salah gently called him out for being a liar. Yes, it's true: Carebears are accustomed to telling lies. Only with our help can they be made to tell the truth. 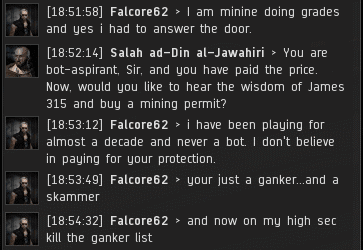 Falcore62 has spent "almost a decade" mining in highsec--though he'd probably call himself a new player if he saw an advantage in it. He considered himself Salah's new nemesis. Would Falcore62 put a stop to Agent Salah's listening tour, just when he was beginning to make real progress? Was this the beginning of the end of the New Order?

To be continued...
Posted by MinerBumping at 22:16