Agent Shnjago was busy prosecuting the war against Star to Star Inc, which was known to harbor bot-aspirants.

Our hero spotted a number of Star to Star Inc's Mobile Tractor Units in the Endrulf system. Miners do not have a right to hold property in highsec without my permission, so Shnjago destroyed them. 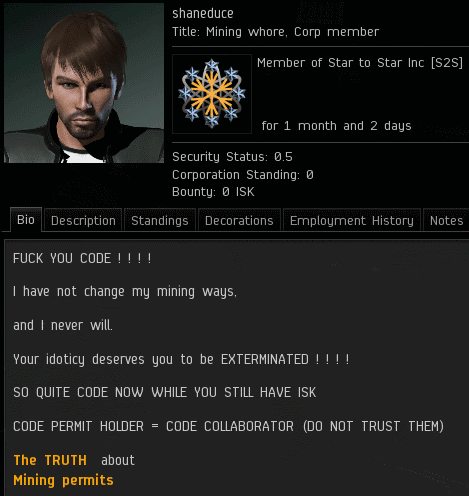 The former owner of the MTUs was none other than shaneduce. Previously, we saw him attempt to recruit allies for his wardec in the Anti-Ganking channel. The effort was unsuccessful, as none of the Anti-Gankers were interested in fighting the New Order. We're too powerful. 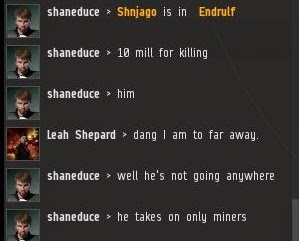 shaneduce has been playing EVE for only four years. As a new player, he was ill-equipped to prevent the destruction of his MTUs. He returned to the Anti-Ganking channel once more. A fellow rebel named Leah Shepard expressed an interest in killing our Agent, but she was too far away. shaneduce assured her that our Agent was incapable of fighting anything but a miner. 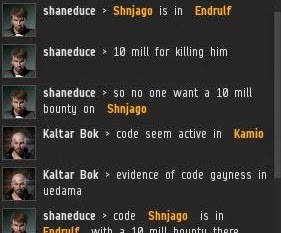 shaneduce continued his efforts. The rebels weren't interested in fighting a New Order Agent, even if paid to do so. It appeared Anti-Ganking wasn't so opposed to ganking, after all. 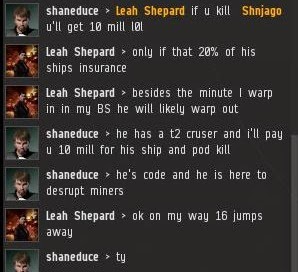 ...But then things turned in shaneduce's favor. Leah Shepard, a mighty battleship pilot, changed her mind. She was willing to travel the 16 jumps to put a stop to Agent Shnjago. The only question was, would Shnjago still be there when Leah finally arrived? 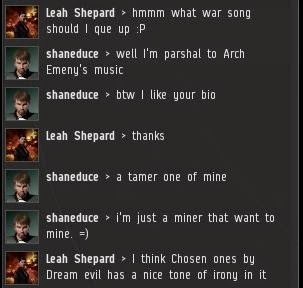 As Leah prepared her battleship for the journey, she was already thinking of how to celebrate her victory. She picked out some war music. shaneduce cheered at the prospect of salvation. 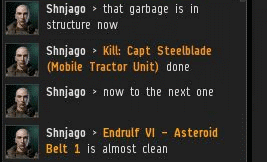 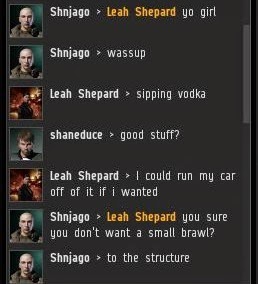 Leah entered the system in a Hyperion-class battleship. At first she seemed reluctant to engage Shnjago. Then he started chatting her up in local, where shaneduce was expectantly awaiting news of Shnjago's demise. Leah agreed to a duel. The New Order only shoots ships that can't shoot back, she knew.

It was a costly mistake. She'd forgotten the first lesson every highsec carebear should learn: The CODE always wins. Always. 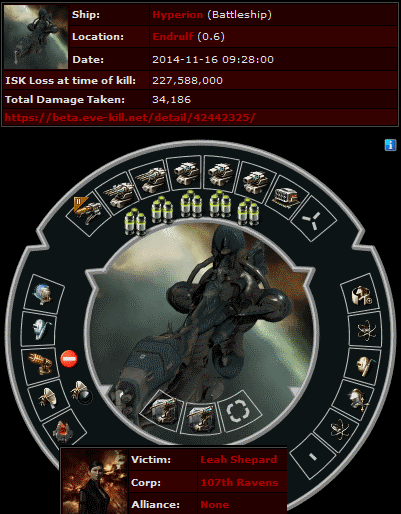 In the end, Leah's blaster rail miner missile Hyperion was no match for the power of the Code. Agent Shnjago defeated her with ease.

Prior to the duel, Leah's bio consisted of a personal attack against yours truly, someone she'd never met. After the duel, she changed her tune:

The success of the New Order was undeniable. Having been bested in an honourable 1v1, Leah had no choice but to give us some grudging props.

shaneduce's corp, Star to Star Inc, had no choice but to admit defeat in the face of the New Order juggernaut. Even Anti-Ganking's battleship pilots were no match for our Agents. All the stuff shaneduce had been told about the New Order only shooting defenseless mining ships--it turned out to be a lie. He saw the truth for himself. So he quit the corp. Star to Star Inc went inactive. "The star has died," proclaimed the corp description. 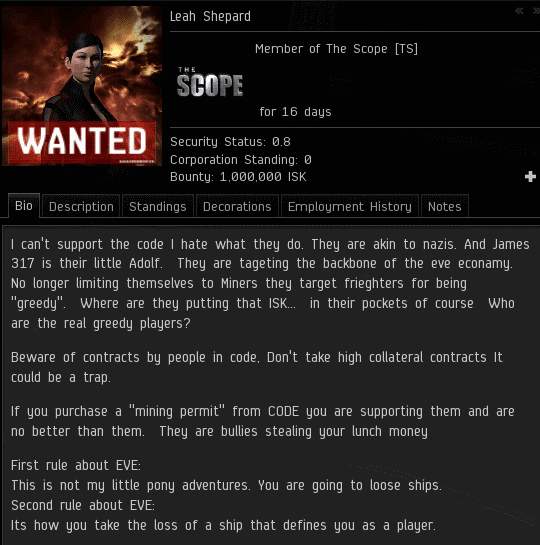 Leah Shepard changed her mind yet again. The New Order posed a threat to the entire EVE economy. She retracted her props and elaborated on her hatred. Once upon a time, EVE players used their bios as a space to talk about themselves or provide a handy list of NPC damage types. Today, the bio is chiefly used by highsec players to express their attitude about me and the Code. One day, the glory of the New Order will entirely consume every highsec player's thoughts at all times. We've earned it!
Posted by MinerBumping at 19:50