The Legend of Katsu Hinken, Part 2

Previously, on MinerBumping... Agent Tisiphone Dira was minding her own business, telling the highsec dwellers in Hek to buy permits. This infuriated Katsu Hinken, who was using Hek local to ask for ship-building advice. He convo'ed Tisiphone, threatening her, and warned of a Goon/PL anti-CODE alliance.

Katsu hinted at a conspiracy behind Burn Jita, but was not willing to give Tisiphone any details. Bot-aspirants are always looking for hidden motives behind Burn Jita, because they can't imagine an EVE player being motivated by anything other than money.

Tisiphone had doubts about Katsu's power and influence. His killboard was unimpressive. But that was exactly what Katsu wanted her to think. His killboard stats were intentionally skewed!

The two tried to find common ground. Katsu was willing to respect the Code, but not if it prevented him from asking questions in Hek local.

After a lengthy discussion about their respective values and beliefs, Tisiphone proposed that she teach Katsu how to enforce the Code.

But it was clear that there was a cultural divide. Happily, our Agents are excellent bridge-builders.

To the Knights of the Order, a ship is something to be used and, having fulfilled its unique purpose, sacrificed to CONCORD. To a carebear like Katsu, fitting an expensive ship is "a lifestyle".

Nevertheless, Katsu was willing to explore New Order culture. Rather than traveling all the way to Halaima, which would tempt Katsu to go AFK and autopilot, Tisiphone proposed the destruction of a miner--right there in Hek!

Was Katsu up to the task? It appeared so. He estimated his ship could do about 10,000 DPS.

Running the numbers, Katsu calculated a maximum DPS for his Maller of about 14,900. More than enough to kill an anti-tanked Retriever.

Tisiphone urged Katsu to hurry up and finish fitting his Maller before the Retriever pilot warped away. However, Katsu needed to make his gank ship cap-stable. With a minute and a half of capacitor, his 14.9K DPS Maller could inflict well over a million damage.

The Maller finally landed in the asteroid belt next to the Retriever and Tisiphone's scout alt. After a minor hiccup, Katsu was ready to unleash his firepower... 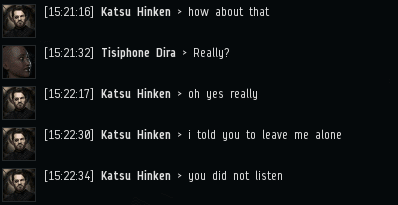 ...But in a shocking twist, Katsu aimed his lasers at Tisiphone's scout instead of the miner! How would Agent Tisiphone Dira get out of this one? Was this the end of the New Order?