The Christmas season has been filled with miracles. 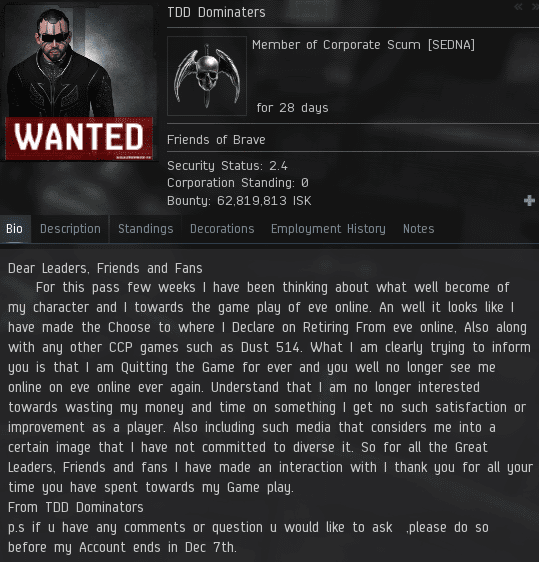 Certainly it would be a miracle if TDD Dominaters stopped exploiting newbies with his high-tax fail-corps. That's not the Christmas miracle I'm talking about, though. 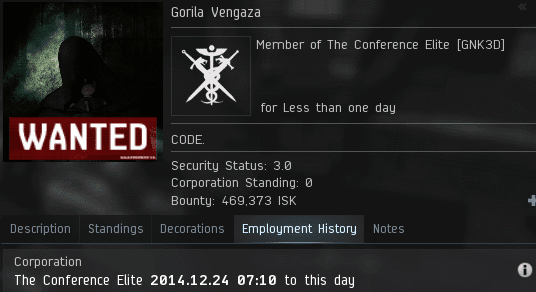 Gorila joined up with a group of gankers and underwent his "baptism by CONCORD", killing freighters in Uedama. The Anti-Gankers were astonished. However, as a prominent leader of the anti-Order resistance, Gorila had a few more tricks up his sleeve... 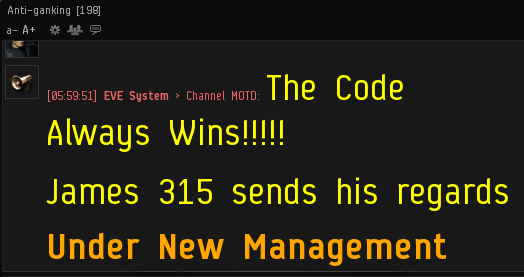 The "Anti-Ganking" channel was created by a carebear named Astecus. As founder of the channel, Astecus retained control no matter what. But Gorila had long been a moderator of the channel. And while Astecus slept, the New Order's newest Agent sprang into action. In a daring tour de force, Gorila removed the other moderators and appointed loyalanon as their replacement. 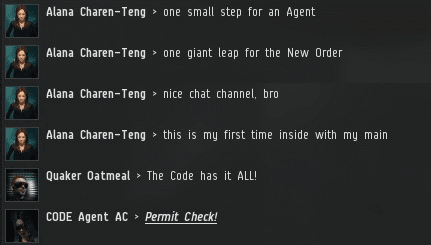 Then came the masterstroke. Since the beginning of Anti-Ganking's existence, Astecus and the other moderators had built up a ban list, comprised of "troublemakers". The ban list was built, brick by brick, until it contained over a thousand entries. It was not so much to keep people out, as to keep them in; it was designed to keep the rebels in a bubble where they could not hear dissenting opinions.

The ban list was wiped clean, an action which could not be undone. The ban list would need to be built all over again. Anti-Ganking's Berlin Wall fell and New Order Agents came rushing in. Scorpions' "Wind of Change" blared from the speakers as our Agents embraced the poor rebel souls.

Not every carebear was ready to accept their new freedom, however.

Rumors spread like wildfire: Gorila Vengaza must have been hacked! Rebel leaders don't say the Code always wins, do they?

When the carebears finally accepted the truth, many of them were furious. Highsec "mining consultant" (that gets me every time!) Kalynn Shardani sent a blistering EVEmail to her former colleague.

A few hours later, Astecus awoke to a bunch of alarming EVEmails. He ended the party and started banning people. But his prized ban list was gone, and no one could erase the memory of the New Order's triumph--a triumph that was but a foretaste of highsec's great future. Nor could the carebears get over the shock of Gorila's change of heart.

On EVE-O, Gorila posted "Announcement From Gorila" to explain his actions:


....Lately my biggest Issue has been the campaign of RL death threats and accusing people of being sociopaths and psychopaths because of how they play a GAME. It’s something I do NOT agree with and have actively campaigned against since day one. It’s a hate campaign Veers is very vocal about and sadly his sentiments have carried over to the AG channels and I’ve seen many embrace it. I’ve sat back and watched the hate and I do NOT approve. I do want to say there ARE some good people in Antiganking regardless of the others and if my actions hurt those people I do apologize.

What I have found from the beginning is I’ve had more in common with CODE than anyone in AG. I can honestly say from experience is I’ve enjoyed my interactions with CODE more than many of my interactions with AG. I have felt many in CODE GET the game and what it means to play it. From 07 I have always understood that no one is safe in the EVE universe and nor should they ever be “SAFE”. You should also have FUN and be laughing when you play a game. Not many laugh in AG from my experiences there are MANY in CODE who do laugh and have FUN.

I’ve seen person after person claim to be the “normal players” while making death threats and other crap at CODE member’s children. To me there is a HUGE difference in telling someone you’re going to hunt them down and kill them INGAME as opposed to making threats to key someone’s car or assault their children in RL. If that’s “Normal” I’d rather be a “psychopath” and play with CODE.

With that said I now refer to a saying my new CEO is known for...

The carebears were furious. Kalynn sent Gorila another EVEmail, telling him to "enjoy your lies and voyage of hatred". Gorila again explained that he wanted to have some fun ganking people, which is as legitimate a play style as any other. Kalynn fired back: 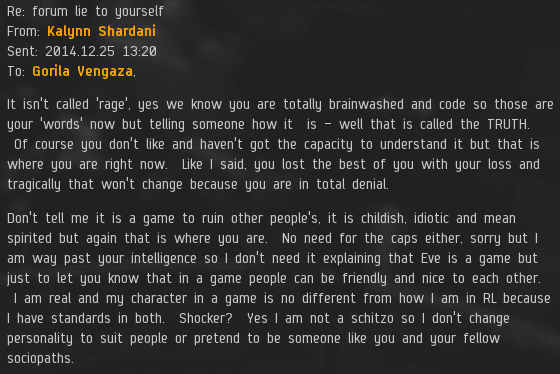 Kalynn, like the rest of the "Ganking Is Bullying" crowd, really did believe only sociopaths would shoot a miner in a 0.5 system (doing the same thing in a 0.4 system is elite PvP). Kalynn continued:

The mining consultant wasn't the only rebel who was disgusted by the Christmas miracle. Many others chimed in. Gorila's actions drew condemnation from Veers Belvar in a series of comments on the Christmas Miracle MinerBumping post:


Getting Gorila to hijack the channel and delete the block list is a new low... even for CODE... and that's saying something. It's pretty pathetic to have absolutely no moral values or standards of common decency. Grow up.

One can't help but be struck by the contrast: Gorila spent months leading the rebels and attacking the New Order, but he was welcomed into the fold by Agents with open arms. On the other hand, when Gorila took a step one millimeter away from the carebears' party line, they condemned him, called him a sociopath and a scumbag, and blocked him.

In short, 'twas a Christmas filled with surprises for all. 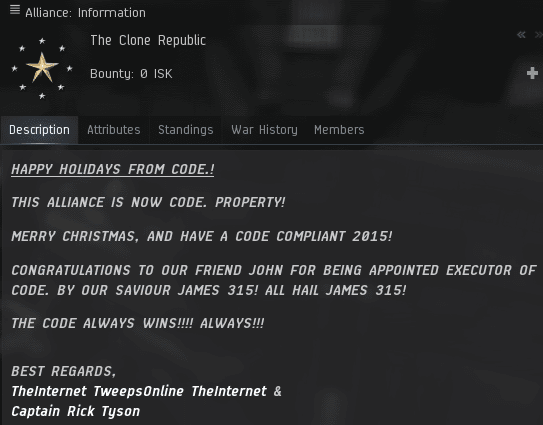 And the gifts kept on coming...
Posted by MinerBumping at 20:44