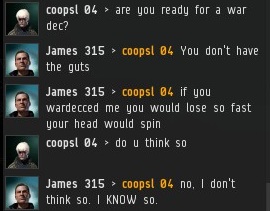 It's always a pleasure when someone threatens to wardec my humble one-man corp, Experimental Fun Times Corp. I have won every war so far.

Most threats of wardecs are never realized, but occasionally someone will pony up the 50 million isk required to launch the 'dec.

In all, I have been wardecced eight times, with each 'dec defeated by dissolving and reforming the exact same corp. I blogged about this from the beginning, but not everyone reads every MinerBumping post--a mistake, to be sure. 400 million isk of damages have been inflicted in this manner.

Now turn back the clock to October, when Agent Galaxy Pig braved the wilds of EVE-O to request that CCP make a public statement about miner bumping. A few months later, they finally did. At the time, Beachura and other denialists wanted everyone to just ignore the New Order, hoping we would go away. You might remember Beachura's alliance, Double Tap., for its failed merc contract against us last autumn.

Now, having had your fill of exposition and background info, you are well-prepared to enjoy Beachura's masterpiece of tears: 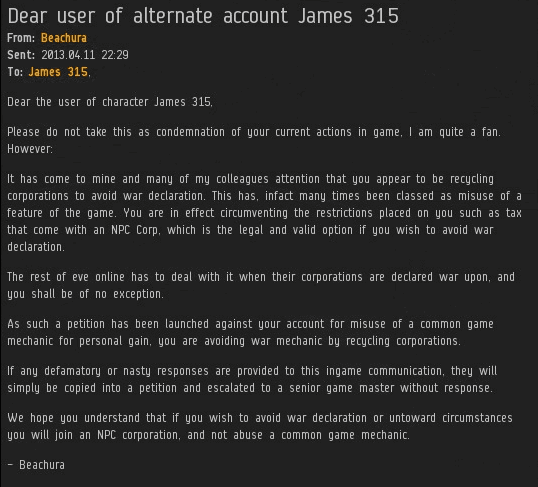 Satisfying indeed. I attempted to respond to Beachura's EVEmail, but to no effect: 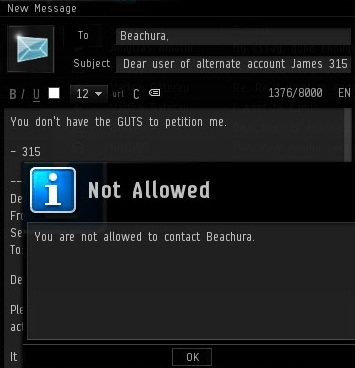 Sadly, I was pre-blocked by the valiant space-lawyering denialist failmerc. I am unable to contact Beachura, but hopefully this won't be the last we hear of her. I would hate for things between us to be left like this.
Posted by MinerBumping at 20:49