Time for more love from the New Order's vibrant community.

Yes, it's Venture hunting season again. Agent CODE Agent AC has revived the contest she created last year. You can see the Official EVE-O Thread for the February contest at the link.


1. Venture Pilots must be unique and different players.
2. Kills must be made in High Security Space (1.0 - 0.5)
3. Anyone can participate - You do not need to be a member of the CODE. Alliance or the New Order.
4. Rookie Systems are off limits. [Further evidence, as if we needed any, of the New Order's benevolence and commitment to helping new players. -Ed]

Prizes (I am sure there will be more as this evolves):

So there you have it. Gank as many unique Venture pilots as you can, improve highsec, and maybe win some PLEX.

When news of the contest was released on EVE-O, it was a hit. Who can argue with some player-created fun in EVE?

Just like last time, there were some tears, as well. 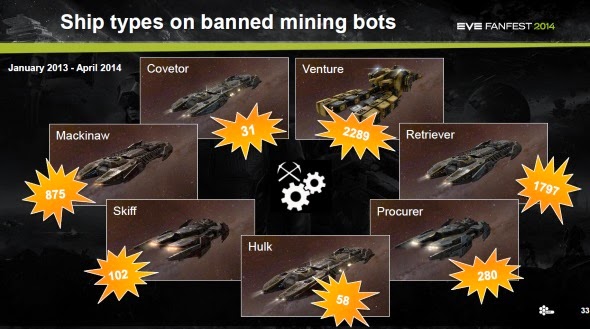 However, the truth is that there are many good reasons to gank Ventures. According to CCP's own statistics, Ventures are the most commonly botted mining ship in the game--by a wide margin. Incredibly, over 40% of bot-miners use Ventures. If you combine Ventures with Retrievers, the other ship frequently used by "new players", a whopping 75% of mining bots are accounted for. This puts all of those cries for "protecting new players" in a different light, no?

The New Order loves genuine new players. We welcome them into our family. With a Venture-ganking contest, we give new gankers the opportunity to practice ganking the weakest mining ship. We also remind all of the bots and bot-aspirants who use Ventures to obey the Code.

Consider: If Venture pilots begin following the Code, they'll stop botting. Then CCP won't have to ban them--and can collect subscription revenue from them instead. Everyone wins!
Posted by MinerBumping at 18:56