The New Order governs highsec like a well-oiled machine. Our Agents are elite PvP warriors, but don't assume that we can't administer territories just as skillfully as we conquer them.

During a routine patrol of New Order territorry, one of our agents detected the following prohibited behaviour:

[ X ] Mining without a valid permit in contravention of The New Halaima Code of Conduct.
[ X ] Failing to dock up while AFK (away from the keyboard).
[ X ] Botting, displaying the characteristics of a bot, or other bot-aspirant behaviour.
[ X ] Excessive mining.
[ ] Rude or vulgar speech (i.e. "smack talk") in local chat.
[ ] Failure to show proper deference to the Supreme Protector of High-sec, our saviour James 315, and/or his lawfully appointed agents of the New Order.

As a result this/these infractions our agents deemed it necessary to take punative action against you as detailed below:

After destroying an illegal miner's Hulk, Agent Jack Van Impe sent the Code violator the above notification, along with more detailed info/links about the Code. Such EVEmails are a toolkit. Every gank "victim" is provided with the equipment they need to upgrade themselves for service in our glorious highsec. As you could probably guess from her sullen, thousand-yard stare, toad trotter has spent the entirety of her one year in EVE mining in highsec. She was a typical rebel miner. Or was she? In fact, toad trotter was about to make history--setting the record for the longest tearmail ever written in response to a gank. 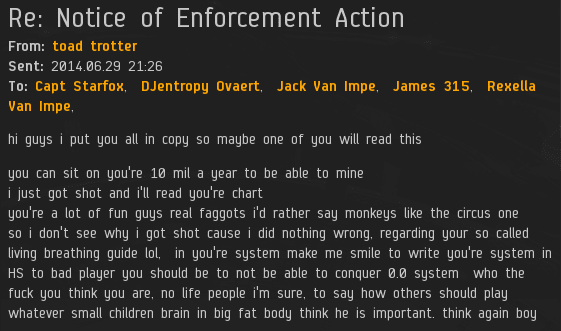 Before sending the tearmail, toad trotter did her homework. She read at least part of the Code and located the names of the Saviour of Highsec and two of the New Order's top diplomats. Now she was ready to rant and rave to the proper authorities.

toad trotter warned everyone of the dire consequences of killing a year-old carebear. So far, nothing special. She would need to dig deep if she wanted her tears to ascend from a mere blub in a Highsec Miner Grab Bag--to be worthy of their own post.

Since toad trotter wasn't one of my contacts, she had to pay the 315 isk CSPA charge. She concluded her EVEmail, which was not the longest tearmail in history. After a few hours with no response from the New Order, she composed another one. 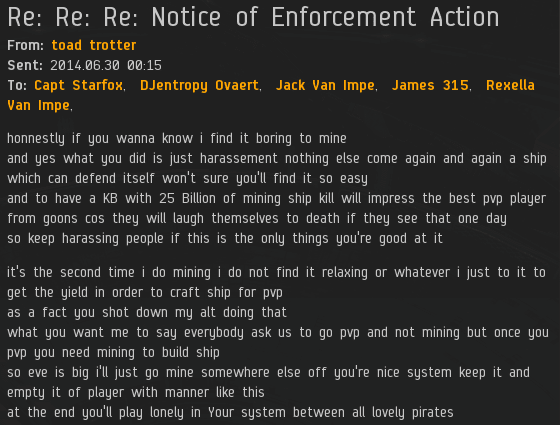 Beginning a fresh EVEmail, toad trotter got her second wind. In the first couple paragraphs, she dropped a few Miner Bingo quotes. But she was only getting warmed up.

Like other angry miners, she insisted she wasn't angry. As much as she might deny it, something was keeping her going. Something inside toad trotter would propel her into MinerBumping history.

toad trotter indulged in some low-grade denialism, claiming the New Order isn't famous and is but one of many organizations claiming to own highsec.

Exhausted, toad trotter finished her second EVEmail. Combined, she had already written far more words in response to a gank than anyone could have anticipated. But this wasn't the longest tearmail, either. 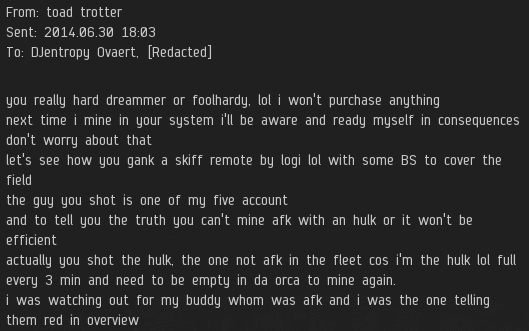 The next day, toad trotter got down to business. She had new threats and new excuses to give the New Order.

toad trotter fumed that her Hulk was the only ship in her fleet that wasn't mining AFK. She accused our Agents of targeting the Hulk only because it was the most expensive one. (As if that's a bad thing.) The essay continued. Because this time, toad trotter was writing the longest tearmail in history. And she was only getting started.