Why They Hate the Code, Part 7

Previously, on MinerBumping... Our readers gained an even more profound understanding of the New Order's enemies and their motives.

"CCP must like ganking. That's why the mechanics are in the ganker's favor."

Earlier, we saw that the Passionate Young Rebel's flame always dies. For most former Passionate Young Rebels, the only way forward is out: Out of the rebellion, or out of EVE entirely. However, there is still room in the anti-Order resistance for a privileged few. These are the Cynical Old Rebels, who find themselves propelled by the force of inertia alone.

The Cynical Old Rebel looks upon each new generation of Passionate Young Rebels with a sense of paternal amusement. He no longer believes in victory against the New Order. In fact, the Cynical Old Rebel has long since come to accept the fact that the Code always wins. He's seen it happen too many times. He knows that the new crop of rebels will fail, but he says nothing to discourage them from their futile endeavors. It's not his place.

As for the Cynical Old Rebel himself, he has earned a place of honour among the rebels, by virtue of his seniority if not his victories (since no rebel ever experiences triumph). He may be a moderator of the Anti-Ganking channel or have some other identifying mark of his status. This trinket is what keeps him tied to his old rebel life, rather than biomassing his character. Besides, what else is he going to do?

The Cynical Old Rebel clings to a shadow of his former hatred of the Code. He still believes the Code is a bad thing, in general; he may even harbor a personal dislike for our Agents. But he can no longer muster up the energy to make himself really feel anything about it. Having realized the unstoppable power of the New Order, the Cynical Old Rebel looks upon his enemy as a force of nature. It's difficult to properly hate a force of nature.

"It's none of your business why I'm here."

Hatred of the Code in EVE stems primarily from those who would like to continue abusing highsec. Even so, there is a negative attitude toward the New Order even among some residents of lowsec, nullsec, and the wormholes. A portion of that hostility can be traced directly to those who straddle both the highsec and low/null/WH lifestyles. I speak of the Closeted Highsec Dweller, whose main is in the outer regions of the EVE galaxy, but who still prefers to spend time grinding isk in highsec. 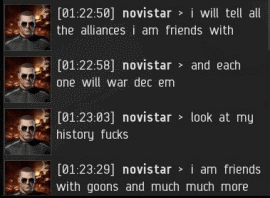 Of course, most highsec carebears who claim to have a "main" elsewhere are liars. However, it remains true that there are countless players in the outer regions who keep a few alts stashed away in highsec to do their PvE. This has always been the "smoking gun" evidence of the risk/reward imbalance of highsec. Imagine going to all that effort to secure one's place in nullsec against all enemies--only to run missions or mine in highsec!

All of our Agents have encountered the Closeted Highsec Dweller. The word "closeted" in the name may be misleading, because some of these highsec characters actually belong to their nullsec alliance. Apparently the carebear values the status symbol more than wardec immunity. Regardless, the Closeted Highsec Dweller represents someone from the outer regions operating illegally in highsec. And he is terminated as swiftly as the carebear who doesn't have powerful friends. 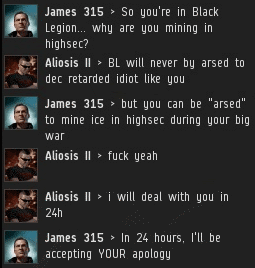 New Order diplomacy is simple: Obey the Code. So much for all the shady backroom deals and Machiavellian machinations! The Closeted Highsec Dweller hates being treated like a carebear, but he can't stop acting like one. What makes his anger different from that of a normal carebear is that it is passed along to the low/null/WH alliance to which he belongs, even if he only lives outside highsec part time.

If the Closeted Nullsec Dweller can't bring himself to give up the conveniences and luxuries of highsec life, the Nouveau Null is on the opposite end of the spectrum: He can't wait to leave. He's counting down the minutes for his application to a nullsec corp to be accepted. He can't get out of highsec fast enough. And once he does, he plans never to look back.

From the beginning of his EVE career, Nouveau Null lived in highsec. Eventually he came to understand the limits of highsec PvE. Yes, it's safer and less complicated and easier to automate. Yes, it's far more convenient, being located so close to the great EVE trade hubs. And yes, you don't have to worry about bubble camps and red pen CTAs and jump fatigue and all that other nonsense. Nouveau Null doesn't care so much about those things. More than anything else, he cares about image. And everybody knows that highsec is lower than nullsec.

Nouveau Null dreams of his escape to bigger and better things. He knows his fellow highsec miners often talk about the same thing, but Nouveau Null means it. Sooner or later, he finds a way to make it happen. As soon as he's accepted to a corp outside of highsec, he packs up all his things and moves out. He probably gets ganked on his way and loses his stuff, but that doesn't dampen his excitement. He's graduated!

Unfortunately, Nouveau Null still has a cloud over his head, something that he knows will prevent him from enjoying the perfect happiness that he's earned. It's his past, the stink of formerly living in highsec. He believes the other members of his nullsec alliance can still smell it on him. So Nouveau Null does his best to cut all his ties with highsec, to erase every association he may have with his former life. He doesn't have any roots in highsec anymore--how could he? He hates highsec. He hates everything about it. 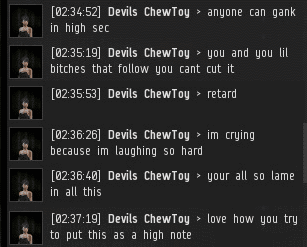 Nothing is more "highsec" than the New Order of Highsec. The Code is highsec in its most ideal form. Nouveau Null must therefore despise and look down upon the New Order. Even if he never sets foot in highsec again, he must be disgusted by it. He's better than highsec, now.