Previously, on MinerBumping... Agent Hero Of HiSec grabbed his copy of the Code and hurried to the Hek neighborhood, spreading the New Order's blessings far and wide. His unique style endeared him to some, while others despised him and all that he stood for.

Some miners were willing to meet Hero on his own terms. "When in Hek," and all that.

Nevertheless, Agent Hero didn't judge his fellow EVE players according to their outward appearances. It was their compliance with the Code that he was interested in. 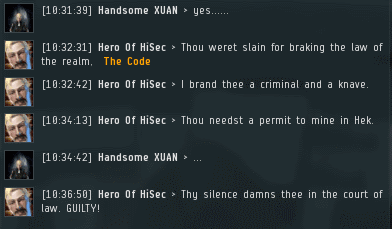 One of the reasons the New Order is so efficient is that every Agent serves as a judge, jury, and executioner. Miners get the benefit of speedy, convenient justice.

Hero ganked Elimir Egnald's unlicensed Venture. The Agent was soon treated to a series of objections and denials.

Few miners can escape unscathed from an argument with one of our Agents.

Elimir's guilt seemed certain. But then came a "HOWEVER" with a dramatic sweep of Hero's arm.

The miner was given an opportunity to have his claim of innocence heard by another Agent. Would he take it?

He would. Elimir reported to the channel and presented his arguments.

Elimir tried to put the system on trial, but Niko Vladirovich wasn't interested. He cut to the chase: Elimir lacked a mining permit.

Although the miner offended the court, Niko was willing to give him some advice. Using a Venture to mine in highsec is a bad idea.

Elimir proved himself to be a Goofus, rejecting Niko's sage advice and vindicating the original gank. 'Twas a good day to be Agent Hero Of HiSec. 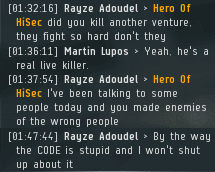 But the true villain of this story still lurked in the shadows.

To be continued...
Posted by MinerBumping at 16:51