How to Use 85 Million Skillpoints

It was a by-the-book gank: Agent Duvaindes Fireleaf was on patrol in the Actee system, where she discovered a non-compliant miner. Death followed. 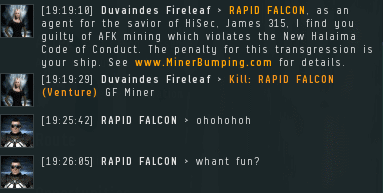 The miner in question, RAPID FALCON, had been mining in a Venture. In case he was a newbie, Agent Duvaindes began supplying the miner with valuable information about the nature of the gank he'd just experienced.

The miner appeared to be punch-drunk. Or maybe he was always like this.

RAPID made a ominous comment about a new code coming to the Actee system. Was he threatening counter-revolution?

The miner followed up his sinister prediction with another one. Unfortunately, RAPID had difficulty communicating his intentions, so it's possible he meant something else entirely.

No matter how many miners our Agents deal with--and no matter how similar the miners are to each other--there's always the potential for a bombshell revelation. RAPID made a stunning disclosure: He had 85 million skillpoints! 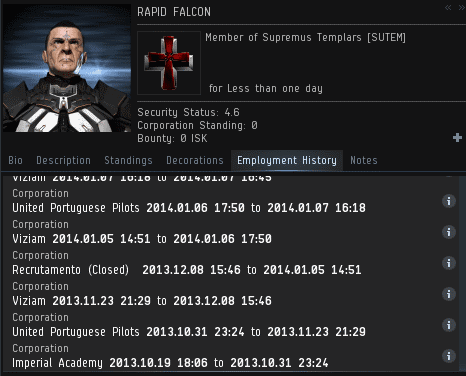 Could he be telling the truth? Yes. RAPID's lengthy employment history goes back long enough to support his extraordinary claim. 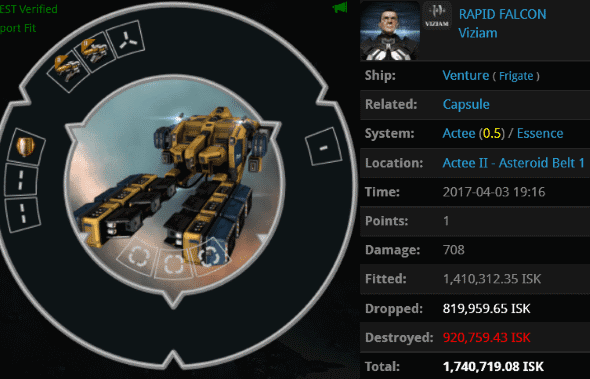 Behold the sum total of RAPID FALCON's three and a half years of EVE experience and 85 million skillpoints.

Duvaindes could only pity the miner. He wasn't interested in her compassion, though.

Our Agent tried to find some common ground with the miner, but the task proved to be impossible. It was difficult enough to carry on a conversation with RAPID--even a hostile one.

RAPID was sensitive to any criticism about his Venture fit. He renewed his threats. 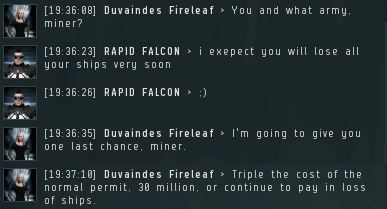 Actually, our Agents are perfectly happy to lose all their ships--to CONCORD, that is. Duvaindes wasn't too worried about RAPID's claim to be able to hunt her down across the entire EVE galaxy. However, she did feel a Red Pen fee was appropriate in this instance. 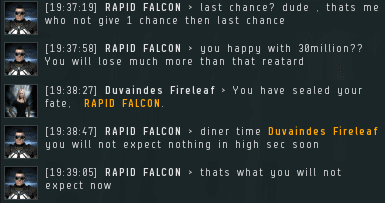