The Definition of a Bot-Aspirant

The Aidart system: All was quiet and boring until an injection of the Code brought the system to life. Highsec miner D33jay Dinner lost her fail-fit Covetor, but she gained so much more in content.

D33jay didn't blame herself for violating the Code. Nor did she see any problem with her ludicrous Covetor fit. But she did find fault with Agent Zopiclone--against whom she calmly raged in local.

Spurning even the slightest risk or difficulty, D33jay chose a life of highsec mining, which she assumed was 100% safe. Naturally, she criticized our Agent for not going to nullsec.

In this case, the three "fags" also included Agent Never Gonna SeeGrandKids and a Serpentis Watchman.

Zopiclone attempted to teach D33jay about the Code, but the miner was extremely close-minded. She was so skeptical that she even questioned the words Zopiclone was using.

D33jay's own vocabulary was questionable. For example, she did not consider herself a miner.

The self-proclaimed non-miner complained about the unfairness of EVE and suggested other players should pay her to mine.

As D33jay questioned the sanity of our Agents, her own mental stability began to display signs of weakening.

Since her Covetor was destroyed, D33jay downgraded to a Venture and challenged Zopiclone to come gank her.

As it is written,


As Supreme Protector, some may expect me to doggedly enforce the rules at all times against all offenders. This is a misperception of my role. Aside from those who have purchased indulgences, I will bump whomever I choose, whenever I choose. Your mining operations are entirely at my mercy. If I feel like stopping you from mining, I will; if not, I won't.

This section of the Code has made a lot of rebellious miners very unhappy.

Residents of Aidart noticed the disturbance in local and remarked upon it. Their innocent comments were enough to drive D33jay to (more) anger.

D33jay graduated from the false bravado phase and went into sulking mode. Her "fun" day of AFK mining in highsec had been ruined.

An important part of the New Order's philosophy is the idea that highsec isn't meant to be 100% safe, and that players should expect potential PvP--including ganking--anywhere in the game. Our philosophy has been so successful, so utterly persuasive, that it has taken hold even among many of our enemies.

D33jay's bizarre ideas about the definition of "miner", "MMO", and "sandbox" made her the object of ridicule among her fellow miners. 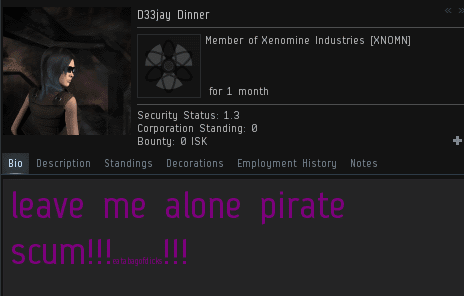 We can see, then, that the bot-aspirant carebear does not merely hold different opinions and preferences. Rather, the D33jays of EVE are objectively wrong. No wonder they instinctively recoil from truth. And it's no wonder that they always fail.
Posted by MinerBumping at 17:26